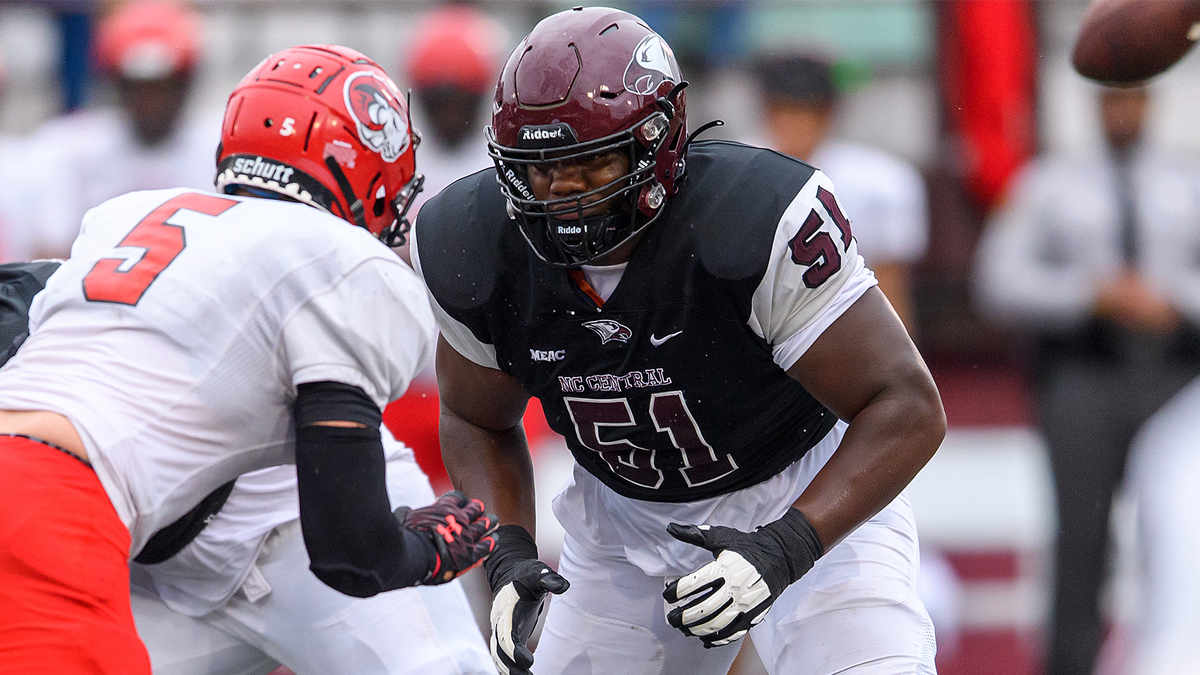 NC Central guard Corey Bullock has been one of the anchors of the MEAC’s top team, and he’s being recognized as a top offensive lineman.

INDIANAPOLIS – NC Central University junior Corey Bullock has been tagged as the best offensive guard in the NCAA Division I-FCS, according to a position-by-position breakdown on NCAA.com.

Stan Becton, a writer with NCAA.com, provided the following explanation for Bullock’s selection as the top offensive guard on the FCS level.

“Corey Bullock is the premier offensive lineman on the best offensive line in HBCU football through the season’s first half. Bullock plays his best at guard, but continues to show the versatility to play all over the North Carolina Central front. He’s earned two MEAC Offensive Lineman of the Week honors already this season.”

Corey Bullock, a 6-4, 315-pound junior out of Accokeek, Maryland, earned All-MEAC Second Team recognition following his sophomore campaign in 2021, and was a Preseason All-MEAC First Team honoree prior to the start of 2022.

He has been selected as the MEAC Offensive Lineman of the Week twice this season. In the season-opening victory over North Carolina A&T in the Duke’s Mayo Classic, Corey Bullock played in three different line positions over 66 offensive snaps, recording four pancake blocks while not giving up a sack or committing a penalty and grading out at a team-best 87 percent. While knocking off No. 25 New Hampshire, Bullock graded out at 95 percent and racked up an astounding 13 pancake blocks, protecting an Eagles offense that had 399 total yards. He went 65 offensive snaps without recording a penalty or giving up a sack.

As a team, NC Central is 5-1 overall and 1-0 in conference play. The Eagles top the MEAC in rushing offense (199.0 yards per game) and total offense (430.8 yards per game), while ranking 17th and 22nd among the Division I-FCS in each category, respectively.

Up next, NC Central visits the defending MEAC and Celebration Bowl champions, South Carolina State, on Oct. 22 at 1:30 p.m. The highly anticipated match-up will stream live on ESPN3.