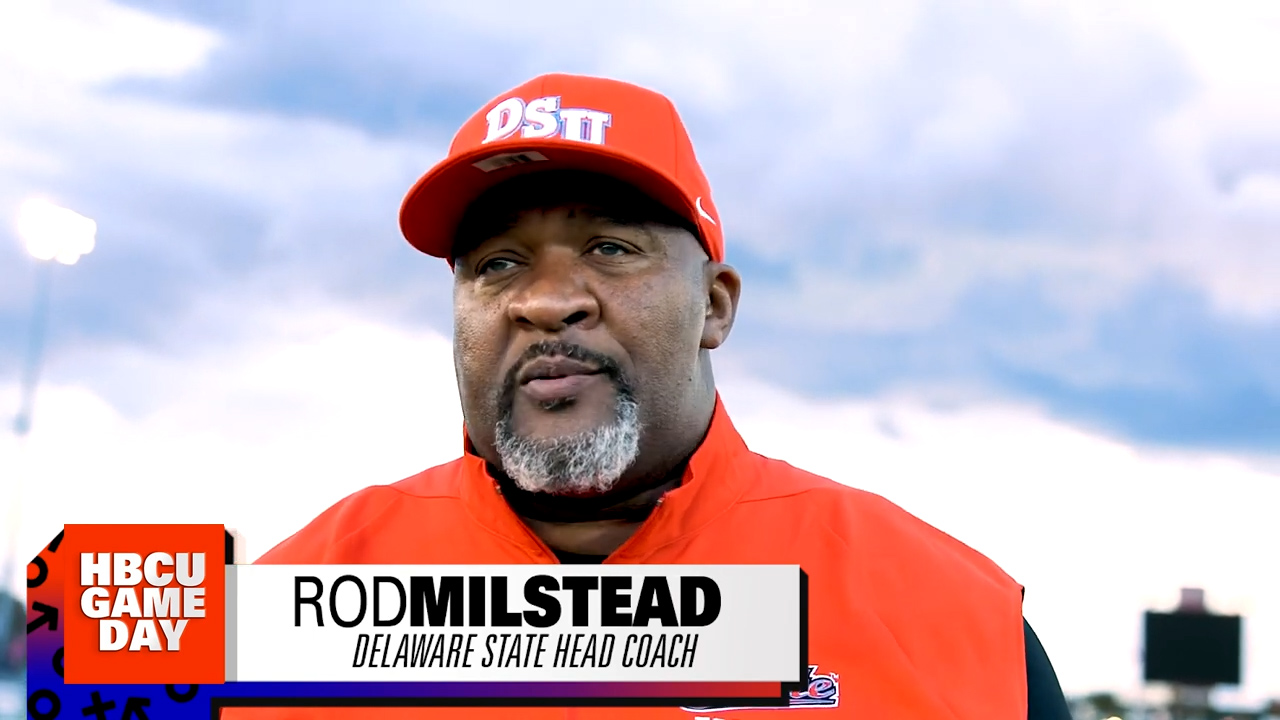 Delaware State head coach Rod Milstead isn’t a big fan of the transfer portal as he looks to build a contender.

There is no doubt that the transfer portal has changed the complexities of building a football program. Just ask Delaware State head coach Rod Milstead.

Five DSU student-athletes will walk out onto the field at Alumni Stadium to be acknowledged for their careers in the football program. The rest of the team has eligibility to return for the 2022 season.

But Milstead knows that those five players won’t be the only ones playing their final games in Dover this weekend. It’s a part of the reality of college football in 2021 and beyond, and he knows this. But it doesn’t mean he likes it.

When asked about the process of building a young team during the MEAC’s weekly media session, Milstead didn’t hold back about his feelings on the transfer portal.

“When it first came out —  of course — I was excited about it. I’m like, Man, you know, hopefully we’ll get the chance to get some of them three or four, maybe a five star bounce back,” he said. “But if you look at the transfer portal — especially coming from FBS — a lot of the players on there were not scholarship players from the beginning. It tells you right on there. So if you look there, that’s the first thing we look at, we look at the guy we go down to see, OK? He wasn’t even a scholarship athlete at this bigger program.”

Talent isn’t the only reason Milstead is skeptical of the portal.

“So my mindset is that if you’re so quick to leave a program that has multimillion more dollars in resources than Delaware State, there’s got to be a red flag that comes up for me,” he said. “You know, there’s a reason why you’re leaving. OK, and then how can I trust you?  You know, how can I trust you?”

Then there are players leaving the program. Milstead pointed out that while the portal has made it easy for student-athletes to move on, but that the vacancy can still hurt Delaware State and any football program beyond just the loss of talent.

“I can’t go to class for them. I can’t take their test for them. I get dinged with a PR point for academics or at a retention point if they don’t find another school. So I get dinged for that. And the kid goes on and he can go and live his life normally,” he said. But I’m still getting a negative look, two of them because of a decision that a 17 or 18-year-old made. And I hope and pray the NCAA looks at that and maybe have some conversations on how it’s really does a disservice to the universities.

“I can’t make a kid stay in my program. I can do everything I can to treat him like I treat the other 104, “he continued. “But there’s no guarantee that kids are going to stay in the program and continue to trust the process, which I always say all the time. It takes time.”

The reality is, though, that there is a numbers game that both student-athletes and coaching staffs have to deal with. Milstead has 47 players classified as freshmen on the field this season. That includes members of the 2019 class that redshirted as well as the 2020 class which had to delay the start of its football careers and the 2021 crop of true freshmen.

“So the foundation is set and we’re excited about this recruiting class, this coming up,” he said. “But we’re going to have to bring in some guys that can come in and play right away. And I think we’re probably going to go through the the JUCO ranks and instead of the portal, the portal, just like I said — it hasn’t been good to us.”

At the end of the day, Milstead feels like he is building something special. He just hopes that his current players understand that it probably won’t happen overnight.