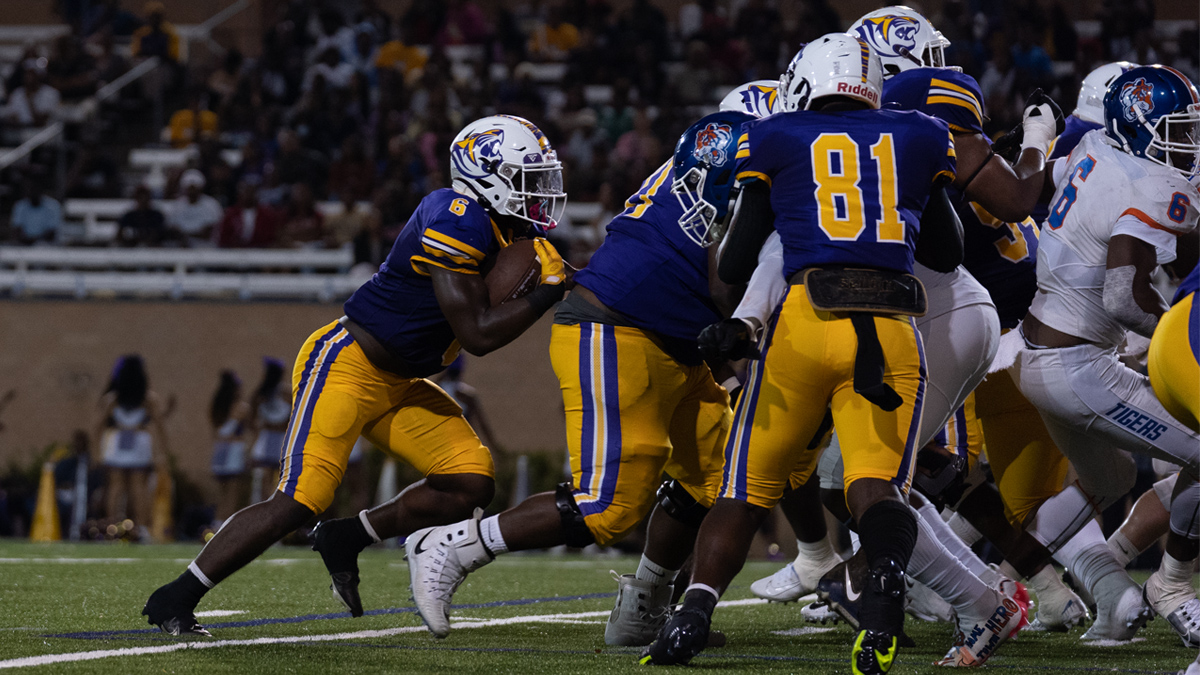 While they don’t get credit on the stat sheet, the Benedict College O-line, AKA “The Fist,” gets it done.

Benedict College showed poise and maturity Saturday night as they used a strong fourth quarter to put away Kentucky State 40-14 and remain undefeated at 4-0 on the season.

After being tied at 14-14 in the third quarter, the Tigers would go on to score 26 unanswered points including 19 in the fourth quarter. They were able to get the ball in the endzone both on the ground and through the air thanks in large part to a group known as “The Fist.”

The Fist is the Tigers’ offensive line who they say are five individual members operating as one. They’ve been able to lead the charge and allow Benedict’s skill positions to shine.
“The Fist, they did an excellent job again. It’s another good week,” head coach Chennis Berry said after the win over Kentucky State. “They’re getting better. They’re developing, they’re lining together as a unit and they’re finding a way to get better as a whole entire offensive line.”

While they don’t get credit on the stat sheet, the results speak for themselves as the Tigers have had back-to-back SIAC Players of the Week on offense. The week before last week it was running back Zaire Scotland, who rushed for 112 yards and one touchdown. This past week it was quarterback Eric Phoenix, who threw for a season-high 188 yards to go with four touchdowns. This is all due in large part to “The Fist” knowing their role and holding their own.

Benedict College offensive line coach Rosco Byrd said he’s pleased to see the intensity his unit has shown during the offseason carry over.

“We’ve just been trying to focus on working together, playing together, playing hard and trusting each other,” he said. “So, they’ve been doing a good job of taking that and pushing it forward every day at practice and then every week during the game. So I’m just proud of their growth. We still have room to get better, but we’re still hungry.”

“The Fist” has given the Tigers the luxury of operating at a high level offensively as they’re averaging 34 points per game, 380.5 yards of total offense with 215.75 of them coming through the air.

Benedict’s dual quarterback threat of Phoenix and Tyler Lampley has also not thrown an interception on the season thanks to the time and space they’ve had to operate in the pocket.

Byrd said consistency is key as they look to continue protecting both quarterbacks this season.

“[The key is] just trust. Building that confidence in each other, knowing that no matter who’s at the helm, we’re gonna do what we need to do,” he said. “So just having trust, chopping wood and carrying water.”