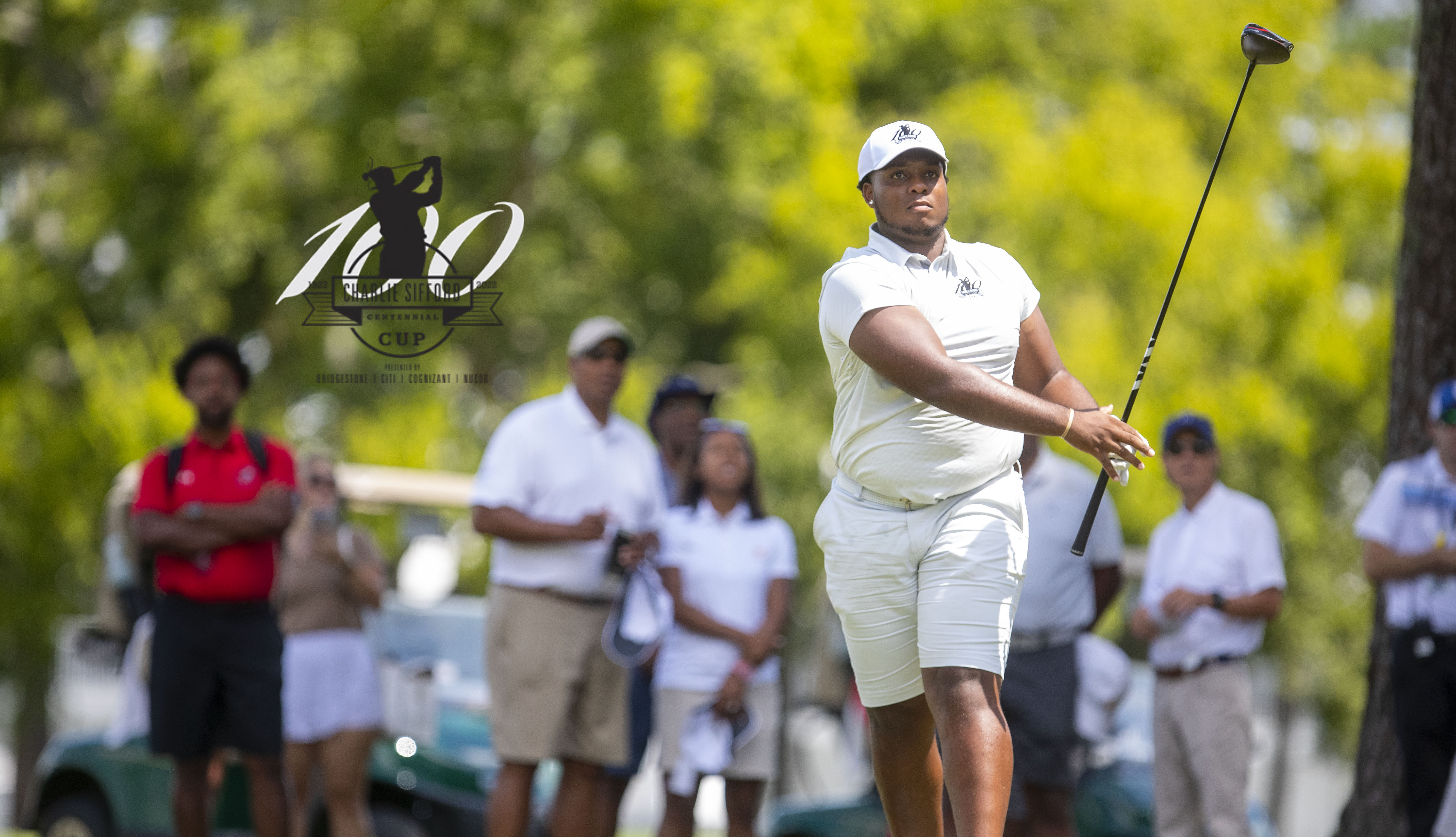 HBCU golf programs got a taste of the big-time at Quail Hollow in the inaugural Charlie Sifford Centennial Cup at the start of the week.

CHARLOTTE, NC — HBCU golf programs got a taste of the big-time at Quail Hollow in the inaugural Charlie Sifford Centennial Cup at the start of the week. It’s a course that has seen its share of PGA Tour events including the PGA Championship in 2017, the Wells Fargo Championship annually, and the return of the PGA Championship in 2025.  In weeks, it will host the Presidents Cup, meaning PGA Tour golfers will trek the same Bermuda grass that the HBCU golf programs did recently.  Much of the construction of the risers, tents, media stations, and grandstands was present while finishing touches were being made to complete the setup.

It was meant to be a competition between the top HBCU golf teams in a PGA environment in celebration of the 100th birthday of black golf pioneer Charlie Sifford.  Sifford’s sons Charlie Sifford Jr. and Roger Sifford along with other family members were present for the event as guests of the PGA. It ended up being much more than anticipated.  The day before the tournament was to take place, each of the six participating school golf programs were awarded $25,000 for whatever the programs desired.  With funding for most HBCU golf programs in a squeeze, the unexpected gift will go a long way to assist in the upcoming season.

Adam Sperling, Executive Director of the PGA Tour and a representative of the President’s Cup was encouraged by the event leading up to the Presidents Cup.

“We’re fortunate to have four wonderful sponsors to help us put on this event in Bridgestone, Citi, Cognizant and Nucor,” he said. “With their support and some other pieces that came together we were able to drive significant contributions to the programs. HBCU involvement in golf has ramped up over the years and we’re just finding our opportunity to fit in and do our part and certainly want to keep what momentum this weekend has been generated this weekend going.”

During a practice round, luncheon and various development activities, the golfers were all presented with a once-in-a-lifetime opportunity.

Monday, it was all business as in the true fashion of the President’s Cup, players would play a singles round followed by a match play round.  Team Sifford, made up of Florida A&M, Alabama State, and Livingstone College defeated Team James Black which consisted of Johnson C. Smith, Howard and Texas Southern.

Players were fitted with a full complement of gear including new golf bags, polo shirts, hats and other incidentals.  The entire experience directly reflected what happens at official PGA and PGA Tour Events.

This wasn’t a celebratory lap or an NBA All-Star game, this was a competition.  The players responded with some very good stretches. Howard University’s Gregory Odom Jr., the reigning HBCU national medalist, pulled off a stretch of three birdies and an eagle on holes 11,12,13 and 14.  Everett Whiten (Howard), of the reigning national champion Bison, pulled off three birdies in a row, mastering holes 11, 12 and 13. Jacob Uyesato (FAMU) carded two consecutive birdies and an eagle on holes 6,7 and 8.  Ty Roberts (ASU) also carded three consecutive birdies on holes 4,5 and 6.

In the final tally, Team Sifford would score a 12-6 victory over Team Black.  The competition was followed by a group picture at the historic Quail Hollow courtyard and a brief celebratory reception as these HBCU golf stars shared the opportunity of a lifetime.