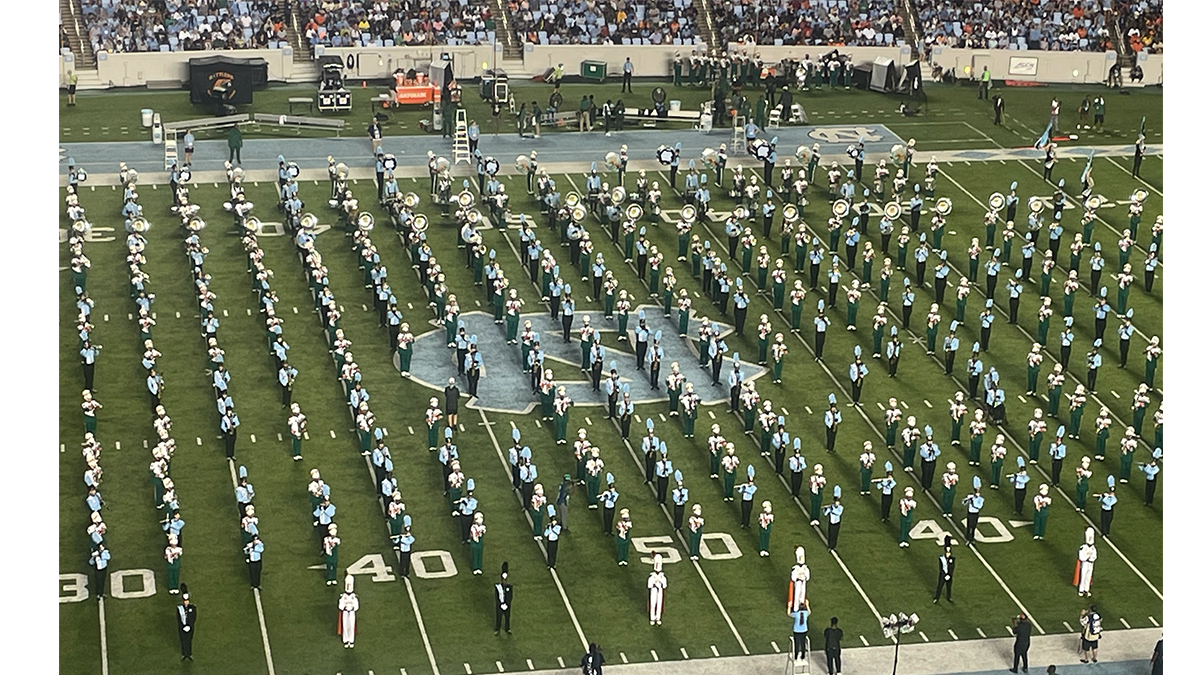 While Florida A&M was unable to get all its frontline players to Saturday’s game at UNC, the Rattlers famed Marching 100 Band was its usual electrifying self. They appear here at halftime joined by the Marching Tar Heels.

With all the intrigue and suspense relating to the Florida A&M football program’s pre-game debacle, the festivities at its season-opener at UNC Saturday evening lived up to the hype.

The game was billed as the HBCU Celebration Game and was nearly called off when as many as 20 FAMU players were declared ineligible late Thursday before Saturday’s game.

But Florida A&M appeared to have a full complement of 70 players when the game kicked off at 8:00 p.m.

The game, set up by UNC head coach Mack Brown, was intended to honor HBCUs and their long history of gridiron greatness. To that end, it featured legendary HBCU head coaches Bill Hayes, Rod Broadway and Rudy Hubbard.

And it featured the famed Florida A&M Marching Band, the Marching 100. All 300 of them!

Hayes, a native of nearby Durham, N.C., played at NC Central in his hometown before becoming the first black coach in the ACC when he became an assistant at Wake Forest in 1973. He moved on to successful careers in head coaching stints at Winston-Salem State and NC A&T. Hayes later served as athletics director at NCCU, FAMU and WSSU. He handled the coin toss that was won by FAMU.

The Marching 100, who has performed all over the world including most recently at this summer’s Louis Vitton Fashion Show in Paris, France, was its usual electrifying self. They strutted onto the field pregame with their stutter-step style. They lined one half of the field at Kenan Stadium while UNC’s Marching Tar Heels covered the other.

At the half, the bands combined for a rendition of Boyz 2 Men’s “Motownphilly” before each performed separately. They then joined to line the entire field for a final number.

Believe it or not, the UNC contingent joined in the Marching 100 in a halftime dance, a staple of HBCU halftime performances. And they pulled it off!!

Fireworks capped off the halftime show. UNC scored late in halt to lead 28-14 at the break.