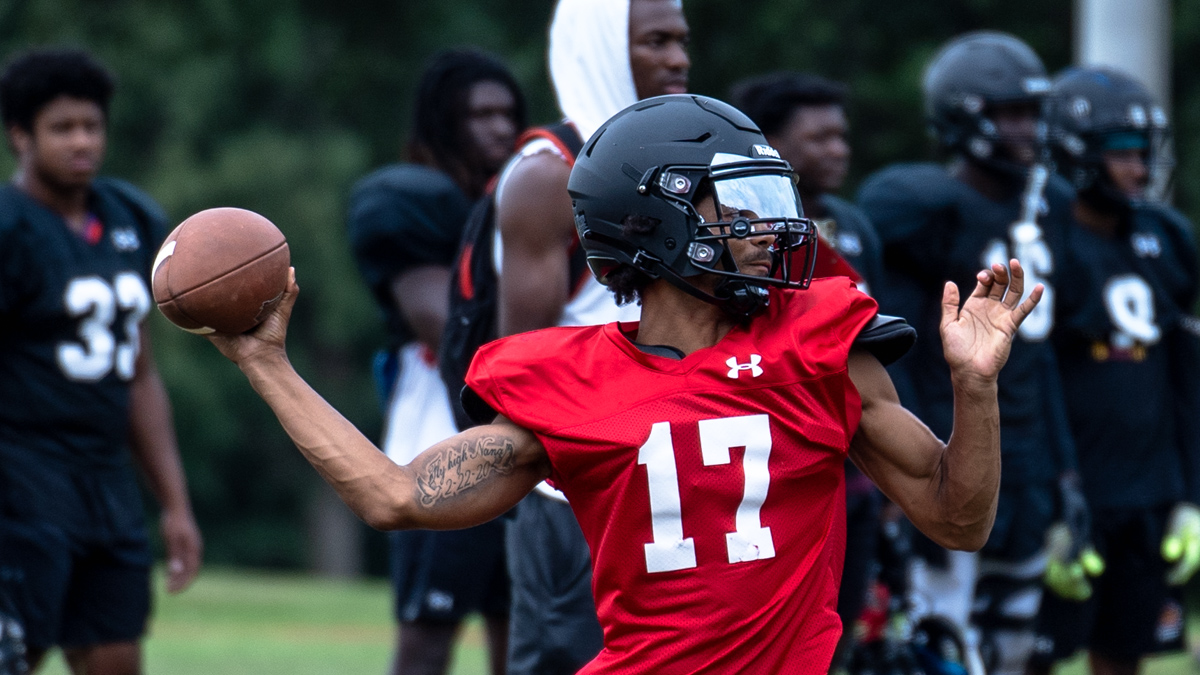 Christian Peters made the decision to focus on football, leading him to switch Charlotte-area high schools and ultimately to Shaw University.

Shaw University quarterback Christian Peters makes himself seen and heard at practice, making plays with his arm and leg and then letting his teammates know about it with his mouth.

The Charlotte native may not have been tabbed the starter by head coach Adrian Jones, but he definitely looks the part when directing his teammates on offense. And when he makes a play, he makes sure his defensive teammates know all about it.

That’s probably the basketball player in him. At 6’2, 175 pounds, he looks like he could play guard in the CIAA just as much as quarterback. In fact, a CIAA rival was interested in him playing basketball, Peters said.

“I had some interest from Winston (Salem-State) in basketball,” Peters said, hair blowing in the wind as he shook his head. “But I’m done with that sport, I’m good on that.”

Peters actually started his high school career at Rocky River, where he played multiple sports but didn’t start football until his sophomore season. As he prepared for his junior year in 2017, he saw the handwriting on the wall there.

“I knew that next year, if I wanted to play, I had to transfer probably because the same lineup, different coaches were coming in. So I ended up taking a transfer to Butler because Davis Cheek had just left. He had signed Elon and it was an open spot.”

Christian Peters took over Butler’s offense for head coach Brian Hales, leading the team to a 17-6 record in two seasons.

“Butler made me focus more on football, and I think that’s why that kind of shaped me to get here,” Peters said. “And I wouldn’t be here without that.”

Shaw was the first school, Peters says, to offer him in high school. There were others, including a pair of CIAA schools, as well as other D2 programs. Ultimately, though, he chose to come to Raleigh where he would redshirt in 2019.

Shaw, along with the rest of the CIAA, sat out the 2020 football season due to COVID-19. Peters says the time between the 2019 season and the 2021 season allowed him to grow largely due to his time spent working with his receivers.

“Honestly, my freshman year — not to say I didn’t take it as serious — but I didn’t have that “want to.” That grind every day,” Peters said. “But it just clicked. Something clicked in me like, ‘Look, you can play, you can play.’ And I needed to go get with my guys to get that chemistry and that mesh where we know what we can do on game day on Saturdays.”

The hard work started paying off for Christian Peters last year. He played in all but one of Shaw’s 10 games, muscling time away from incumbent quarterback Torrin Campbell and leading the team in completions, attempts, yards and touchdowns. He also finished third on the team in rushing. One problem he had last fall was turnovers. He threw six interceptions in just 135 pass attempts and fumbled the ball four times, losing three of them.

Shaw head coach Adrian Jones hasn’t declared a starter yet, but he does like what he’s seen of Peters so far.

“You know, we’re keeping up with the interceptions, the good plays and the bad plays,” Jones said. “But one thing I can say about Christian — he’s done a great job of watching Torrin Campbell be a true leader and he’s taken on that leadership and he’s grown a whole lot. So he’s done a lot of good things for us and we look forward to — whoever is going to be that guy — we to look forward to them leading our team to being great.”

Shaw enters the season looking to get to the CIAA Championship Game for the first time in dozen years. It is ranked in the HBCU Gameday Staff D2 poll and received some votes in the AFCA poll as well. And it may well go as far as Peters takes it.

“You don’t want it to go to our head and we think we’re too good,” Peters said of the polling votes. “But you don’t want to be too low. You know that people are seeing you, people noticing you. So keep the same grind every day and we might climb up that poll.”