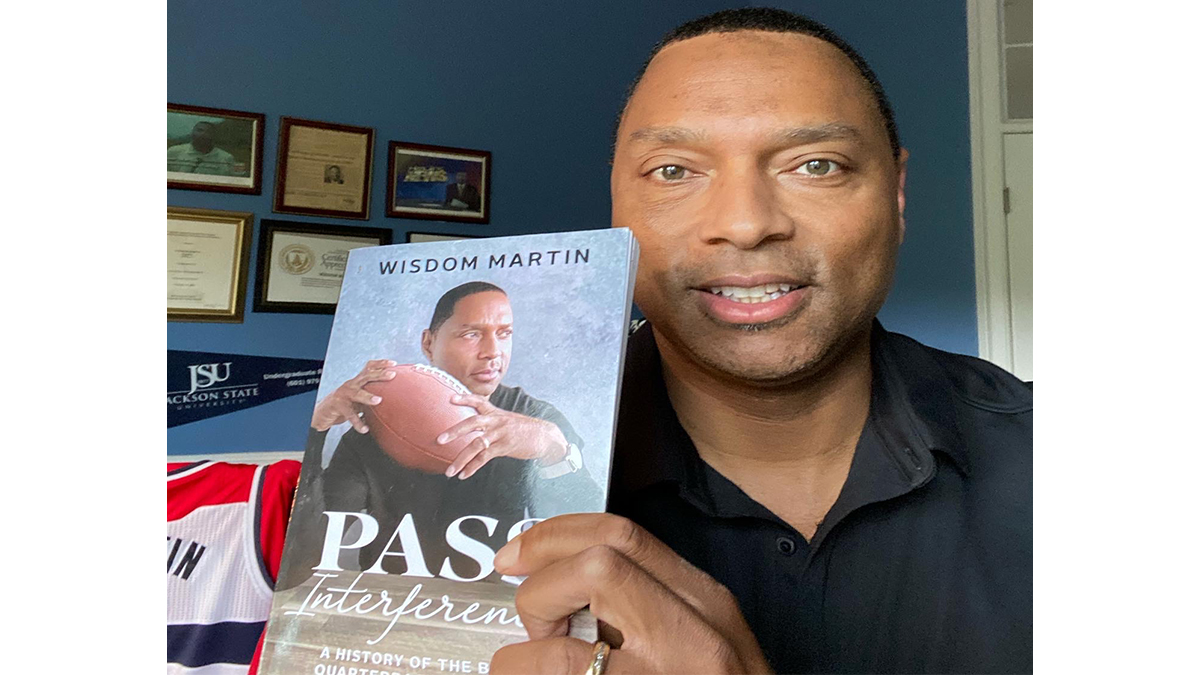 “Pass Interference,” a new book by Jackson State grad Wisdom Martin, explores the racist hurdles and obstacles HBCU and non-HBCU black quarterbacks faced in trying to make it to the professional ranks.

The racist attitudes that have historically kept black quarterbacks from making it in the NFL have been well documented.

There are books like “Third and a Mile: From Fritz Pollard to Michael Vick – an Oral History of the Trials, Tears and Triumphs of the Black Quarterback” from noted journalist, author and Morgan State grad William Rhoden for ESPN. “Quarterback: Shattering the NFL Myth” by former star Grambling quarterback Doug Williams is another that tackles the subject. “Rise of the Black Quarterback: What it means for America” by Andscape’s Jason Reid is recent work with a similar theme.

Veteran Washington, D. C. TV host and journalist Wisdom Martin however has taken another tack on this ugly history. His book, entitled “Pass Interference” came out in June of this year and tells the story from another angle.

“Basically, it is based on the history of the way that black quarterbacks have been treated throughout the history of professional football,” Martin explained about his title. “In football, pass interference is a penalty. I thought it was a good way to describe how these black QBs were treated. They could play the position but they were interfered with by management and coaches that did not want them.

“What’s different about my book is I didn’t just talk to those that made it – the Warren Moons, Doug Wiliams, Steve McNairs and Donovan McNabbs of the world. I talked to the Damien Craigs (Auburn), the Don McPhersons (Syracuse) and Andre Wares (Houston),” Martin said.

The genesis of Pass Interference

Martin is a 1992 Jackson State broadcast journalism graduate. He has been tracking the progress, or the lack thereof, for black quarterbacks since his youth. Around the late 1970s into the 1980s, there were only three black quarterbacks in the NFL.

The three included groundbreaking former Grambling signal-caller James Harris with the LA Rams and later the San Diego Chargers. Harris was the first HBCU quarterback to start in the NFL. Williams, then with the Tampa Bay Bucs, and Southern Cal’s Vince Evans of the Chicago Bears, were the other two.

“I thought that was kind of odd,” Martin said. His late father, Wisdom D. Martin, laid the foundation for what became a passion for the young Wisdom.

As his career as a TV journalist began, he would gather notes on all the black quarterbacks in college and in the pros. One of his first assignments was to cover record-breaking Alcorn State quarterback Steve “Air” McNair early in his career with the Braves.

That led to Martin finding out about Fred McNair, the current Alcorn State head coach, who was a star quarterback at Alcorn before his brother and was actually given the name “Air” before Steve. Fred never played in the NFL.

Marlin Briscoe from little-known Nebraska-Omaha became the first black starting quarterback in pro football in 1968. Briscoe later switched to wide receiver. Ware was the former Heisman Trophy winner from Houston who had a short and undistinguished NFL career.

His research even reached back to dig up stories on Indiana’s George Taliaferro and Prairie View A&M’s Charlie “Choo Choo” Brackens, black quarterbacks who played in the early 1950s. Brackins was the first HBCU alum to play quarterback in the NFL.

“I started finding out who these people were,” Martin said. “So I started calling around and interviewing every one of them on tape and then transcribing those interviews. That eventually led to my book.

“So it goes all the way up until two years ago when I stopped. That’s when I had to stop recording and start writing.”

Martin comes from a family of Jackson State graduates. He counts his mother and father, two sisters, his grandmothers and his wife among many others who attended JSU. He was born in Kosciusko, Mississippi, also the birthplace of Oprah Winfrey.

During his research, Martin found an interesting but little-known fact about his alma mater. Jackson State has four former players in the Pro Football Hall of Fame – Lem Barney, Walter Payton, Jackie Slater and Robert Brazille – but the storied program has never had a quarterback who made an active roster in the NFL.

“Every other position except quarterback,” he said. Perhaps current JSU quarterback Shedeur Sanders will change that.

Who is Wisdom Martin?

After spending nearly eight years as a nightside breaking news reporter in the D.C. area, Martin currently anchors a morning news show from 4 to 6 a.m. at Washington’s WTTG-Fox 5. He then hosts an entertainment show “Good Day DC” on the channel from 9 to 11 a.m.

He said his next book project will focus on the 1970 shooting by Jackson city police in a dormitory on the Jackson State campus that left two young people dead, one a JSU student. Martin’s mother, his mother-in-law and her twin sister were in that dorm at the time of the shooting.

“It’s a tragic incident that nobody talks about,” Martin said. The May 15, 1970 shooting at Jackson State was largely overshadowed by violence days earlier when Ohio National Guardsmen shot and killed four Kent State University students amid a Vietnam War protest.

“Pass Interference,” published by 13th & Joan, is available at Amazon.com and Barnesandnobles.com. The paperback is $17 and the hardcover edition is $20. The publisher is planning a book signing with Martin in late September at the Congressional Black Caucus Weekend.