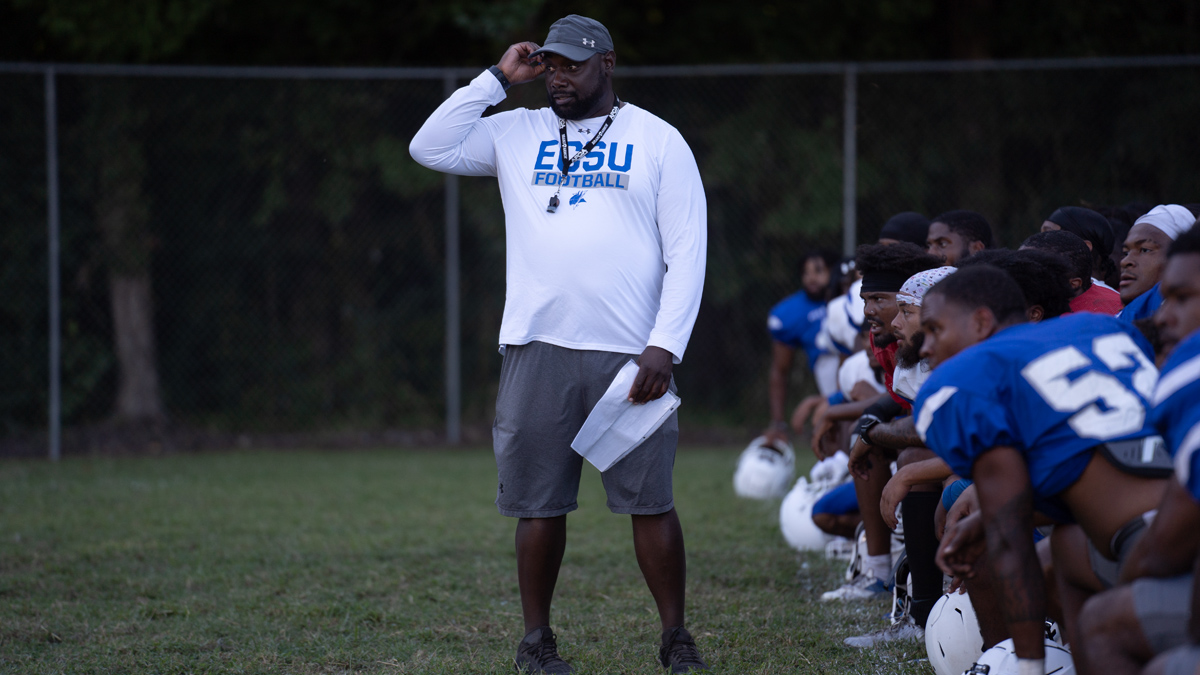 Elizabeth City State is looking to climb out of the CIAA North cellar behind a young head coach who happens to be an alumnus.

ELIZABETH CITY, NC — It was a relatively cool August day on the campus of Elizabeth City State University, with the faintest hint of an ocean breeze off the coast of Northeast North Carolina. But new ECSU head coach Marcus Hilliard was already thinking ahead, to the heat that likely awaits its team in its 2022 opener against Benedict in Columbia, SC.

He hasn’t coached a game yet for his alma mater, but as far as he’s concerned, the honeymoon is over. It’s not that he’s not happy to be back. It’s just that it is time to go to work.

“It’s real now. We’re into our 10th day of practice and the game is almost here,” Hillard said before Wednesday’s practice. “We’re getting right into it and getting the guys in shape. I think that’s been the biggest thing for me, just making sure our guys are in shape because we got our first game down in Columbia (SC). It’s going to be hot.”

Hilliard was hired last December and he said his priority was to build his program along the line of scrimmage — something you would expect from a former defensive lineman and defensive line coach at CIAA North rival Virginia Union.

“Everything starts up front,” Hilliard said. “So we wanted to go out and get these offensive and defensive linemen and this is how we’re building, with those big guys and, of course, and transfer pieces.”

A big get for Hilliard and Elizabeth City State has been Traveon Freshwater, a transfer from East Carolina. The Elizabeth City native was a three-star edge rusher at Northeast High School, and was recruited by the in-state ACC programs before starting his career down the road in Greenville. He transferred to ECSU shortly after Hilliard’s arrival and he’s right where he wants to be.

“The coaches and the team felt like family,” Freshwater said of his choice to return home. “From Day One, once I committed, a bunch of guys on the team started reaching out to me just to welcome me to the team. Ever since then I knew this was the right place to be.”

Hilliard knows he’ll need more than just solid line play to compete. But somehow, he always finds his way back to talking about line-play.

“Getting a signal caller —  a quarterback. Right now we brought in like three guys and we’re still evaluating. So just trying to build it like that. But up front is where we want to start and build this program and just get better up front. I know in our league — we’re an upfront league —  and you’ve got to have those guys up front in order to be successful.”

Elizabeth City State had perhaps the most talent at the wide receiver position. Cameron Saunders, Zion Reddick and Jo Hayes are all talented playmakers who showed flashes last season during ECSU’s 3-7 season.

“Those guys will be tremendous,” Hilliard said. “Those guys helped Elizabeth City win those games that they had last year.”

After fielding strong teams during the first half of the 2010s, Elizabeth City State fell on hard times as a program, mirroring what the school went through as a whole. Since reaching the CIAA title game back-to-back years in 2012, ECSU has yet to finish above .500. The school has turned things around, doubling its enrollment numbers over the last couple of years. Hilliard is hoping to bring a similar resurgence to the football program. But it won’t be easy, especially in the CIAA North.