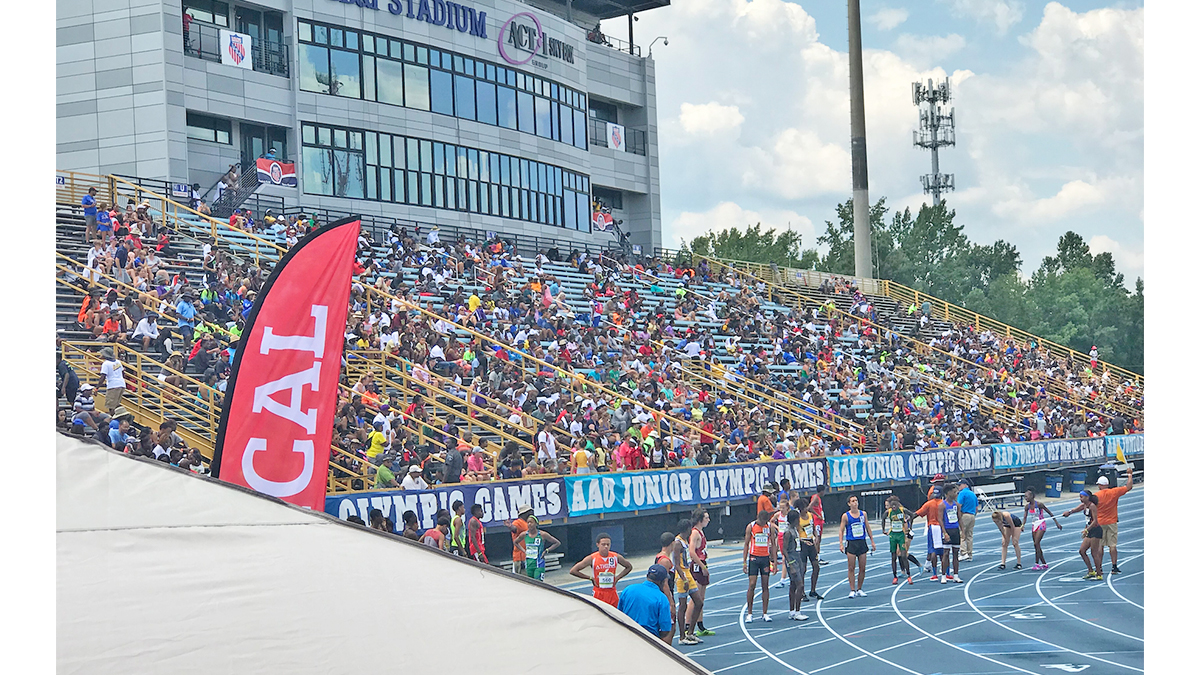 The 2022 AAU Junior Olympic Games have descended on Greensboro with 14,000 of the 19,000 athletes in track & field competition at NC A&T this week. It is the largest track meet in the world.

The event, in its 56th year, is the largest multi-sport event in the world. Participants come from all over the country and range in ages from 8 to 18. They will engage in competition in 20 different sports.

The track and field competition, which will be held at NC A&T’s 23,000-seat Truist Stadium from August 30 through July 6, is the premier event of the Junior Olympics. It is the largest track meet in the world.

The attendance and schedule

The first two days of the track competition at A&T involves multi-events like decathlon, heptatathlon and pentathlon. Individual competition begins on Monday, August 1.

“We expect 10- to 12,000 fans in the stands everyday for seven straight days, beginning Monday” said Paul Campbell, who has been chairman of the AAU Junior Olympic Games for 30 years. “It will be like hosting seven football games in a row.”

“Kudos go to the AAU staff,” said Billy Edringston, NC A&T’s associate athletics director of operations, who oversees the preparation and operation of the event. “When they say the gun is going to fire at 8 am, the gun fires at 8 am whether little Johnny is in place or not, they’re going to go. They have such a staff, they call them ‘the grunt crew,’ they stay ready.”

Competition begins at A&T at 8 a.m. and is over around 5:30 or 6 p.m. Edringston said, weather permitting. The track & field schedule is here.

A return to Greensboro and NC A&T

The AAU Junior Olympics is returning to Greensboro and to NC A&T after a successful run in 2019. That one involved some 16,000 athletes, over 12,000 that competed at NC A&T in the track competition. It also accounted for roughly 34,000 hotel rooms for the city.

This one is bigger. The Greensboro Sports Foundation predicts a $38 million economic impact for the city.

Edringston also oversaw preparation for the 2019 event. He said it presents an opportunity to showcase NC A&T’s campus and facilities.

“We host national track events for New Balance, Nike, Adidas and others as well as the North Carolina High School state competition,” Edringston said as he took a break to talk with HBCU Gameday this week. “This is bigger.”

“We started preparing for this when the 2019 event ended.”

The preparation at NC A&T

On campus, the Deese Ballroom at the university’s sprawling new $90 million student center is used for track registration and packet pickup that began Friday. Other activities involve the stadium’s ticket office, the Sodexho dining services including the campus cafeteria, the university police department, shuttle service from the Greensboro Coliseum – site of other competition – as well as campus plumbing, maintenance, HVAC and internet services.

“Without everybody rallying around to make it a success this couldn’t happen,” Edringston said.

What it means for NC A&T?

“It means a great deal,” Edringston said of what hosting the AAU Junior Olympics means for the university.

“When the university decided to put a Class 1 Mondo track surface at the stadium in 2005, it opened a lot of eyes as to what A&T could be from a track standpoint. It’s a fast surface, athletes like it. Everything is in close proximity. Whether it’s the running events, shot put, high jump or pole vault, people can see what’s going on by sitting in the stands or either watching the big (video) board. So it’s a great spectator venue.

“It’s also an opportunity to recruit future Aggies that may not otherwise come in this direction. They’re coming here from all over the country. They’re coming to us, we’re not having to go to them.

“And it’s brand recognition. When you go to high schools all over the state and around the country, they have pictures of their athletes competing and you see the big Aggie dog (on the video scoreboard) in the background. (Olympic and World champion 400 meter hurdler) Sydney McLaughlin competed here. It means a lot to creating a culture of winning, being a leader, being the best.”

As far as the preparation is concerned, Edringston said everything is ready.

“They say ‘proper preparation prevents piss poor performance.’ We’ve done everything we can do to be ready. You plan and then execute your plan. There are going to be hiccups. You deal with them and minimize them as best you can.”

Campbell has been going to the AAU Junior Olympics since 1978 and missed only one. He has run the event since 1992.

“I was there when (track legend) Carl Lewis won the triple jump and 100 meters in Lincoln, Nebraska (in 1979),” Campbell said. HBCU Gameday caught up with him at A&T just as competition was beginning at the other venues.

“Billy Edringston and his staff have done an excellent job,” Campbell said. “We are extremely happy to be here and have this event here. It was a shocker to a lot of people when we came here in 2019. A lot of people didn’t know. A&T is a proud university and Aggies are very proud.”

Campbell said he rates the Aggies Truist Stadium and the Marcus T. Johnson Track No. 1 in terms of the venues that currently host the event.

“Everything here is like on a triangle. The inflow of athletes in and out of the facility is easy. There’s a premium on the safety of athletes. We’re able to keep people within the confines of the facility. It works very well.”

Campbell said the AAU Junior Olympics has contracted with Flo Sports, an innovator in live event streaming, to carry the competition.

“We will have 20 production crew members (from Flo Sports), ten cameras and Mile Split (an online track site) will interview every winner, even the 8- and 9-year olds,” Campbell said. Flo Sports offers a monthly $24.99 package or an annual $12.49 a month package.

“They will be covering every race, every pit, every ring and jumping station.” He said there will be over 1,000 hours of live streaming from ten different streams.

Spectator admission tickets are available for purchase at all competition venues. Length of event passports are also available for pre-purchase online. Wristbands are provided, upon purchase, to all spectators. No access to venues will be allowed without a wristband.  This will be strictly enforced.  Wristbands are non-transferable.