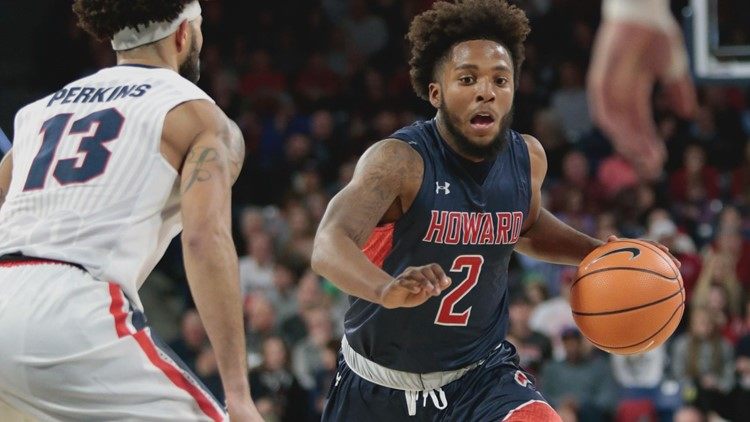 RJ Cole will be wearing purple and gold this summer.

Former Howard University and University of Connecticut guard RJ Cole has been invited to compete in the NBA Summer League with the Los Angles Lakers.

The New Jersey native competed with the Howard Bison for two seasons between 2017 and 2019. Cole had a phenomenal career in D.C., starting in 66 games for the Bison and averaged 22.5 points, four rebounds, and six rebounds throughout. He shot 40 percent from the field and 37 percent from deep.

COLE RACKED UP THE AWARDS

RJ Cole received a bunch of awards for his performance before he departed the Howard Bison program, winning 2017-18 Mid-Eastern Athletic Conference Rookie of the Year as well as 2018-19 MEAC Player of the Year and being named a 2018-19 AP Honorable Mention All-American and First Team All-ECAC

RJ Cole played two seasons at the University of Connecticut after dominating the MEAC with Howard University. Cole played in all 23 games as a senior for the Huskies in the 2020-21 season. He averaged 12.2 points, three rebounds, and four rebounds a game. He led the team in three-point shooting at 38.6% per game. Cole averaged 15.8 points and 3.4 rebounds per game as a graduate student in 2021-22.

The 2022 NBA Summer League will take place July 7-17 at the Thomas & Mack Center and Cox Pavilion on the campus of the University of Nevada, Las Vegas. You can watch former Howard Bison RJ Cole hoop in the Lakers purple and gold across various ESPN platforms where all games will be streamed.