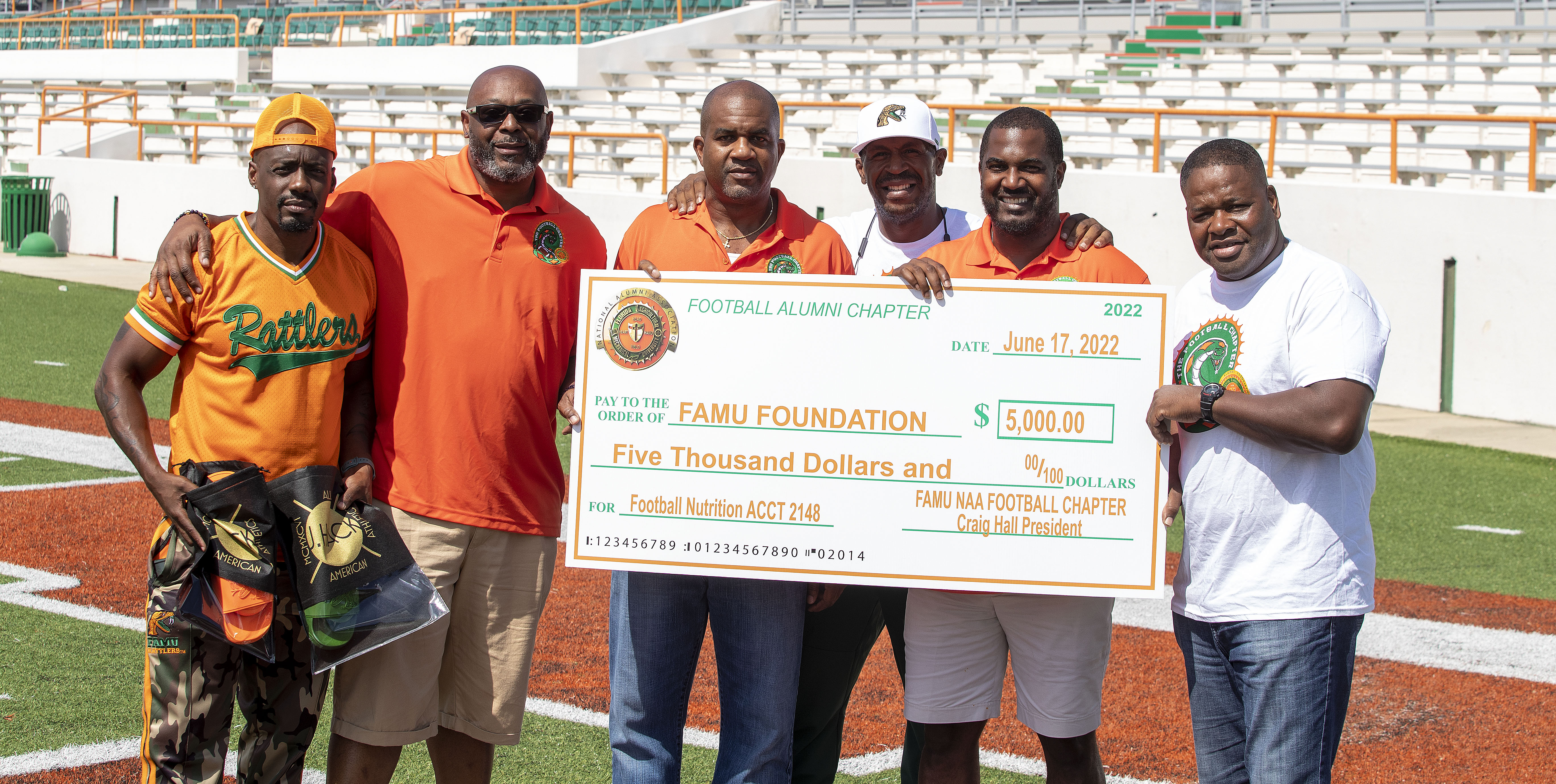 Chartered in early 2020, it is believed to be the first HBCU football alumni chapter chartered in their school’s national alumni association.

Former FAMU Football Players driven to give back

Former football players from Florida A&M have taken a giant leap in reaching back to help their university.  In 2019, led by president Craig Hall, the players began a loose organization of former players to unite and bring support back to the university.  The players organized a board of directors and pursued forming a chapter of the FAMU National Alumni Association (FAMU NAA).

The group has undertaken some smaller projects in the past, like the annual golf tournament for raising funds.  They also sponsor a yacht party at the Orange Blossom Classic which has ballooned in popularity.  In early June, Hall put out the call for players to donate directly to the FAMU football nutrition campaign.  As a result of the connection, within a week, $5,000 was raised for the initiative and deposited into the FAMU Foundation.  Members of the FAMU Football Alumni Chapter presented a mock check to head coach Willie Simmons on June 17 at Bragg Stadium,

Simmons was grateful for the former players stepping up to help.  “Thanks for taking the initiative to support these young men in their endeavors.  Obviously you guys bled, sweated and cried on the field here for Florida A&M  and these guys are doing the same thing and the partnership we’ve been able to develop over the last few years is something that I look forward to continuing to grow,” said Simmons.

Hall said that the chapter was dedicated to sustained support fo the FAMU Football team.  “Our goal is to get involvement from all former players so we can aid the football team and give back what was given to us when we were in their situation.  This contribution is a great start, but we have much bigger aspirations for our chapter,” said Hall.

Other HBCUs have reached out about how the FAMU group organized

Some other HBCUs have taken note of what FAMU has done and some have even reached out to the FAMU Football Alumni Chapter for guidance on how to start a chapter.  “We’ve spoken with some other HBCUs who are interested in gathering their former players to support their schools.  We have seen Grambling in the stages of developing their group.  What is interesting is some of the former players that contacted us say their schools don’t have an active national alumni association.  We were fortunate that FAMU NAA president Col. Gregory Clark took us under his wing and ushered us in because he understood the importance of gathering former players together.  FAMU NAA President-elect Curtis Johnson has expressed his enthusiasm for growing our group because as we grow, members are also dually enrolled as members of the FAMU National Alumni Association,” Hall said.

One of the first things the football alumni chapter did was provide cases of Muscle Milk for the team.  Last year, they provided over 2,000 servings of the protein drink to help players recover after workouts and practice.  This was done through player connections within the organization and the company that produces the product.

Hall, who played quarterback and defensive back for the Rattlers from 1987-1991 leads the association, but it has a strong leadership team. Jerome Hamlett (Vice President), Irvin Clark (Recording secretary/Chaplain), Fitzgerald Wright (Treasurer), Duane Brooks (Corresponding Secretary), Troy Allen (Financial Secretary), Tony Ezell (Parliamentarian), and Wally Williams (Sergeant-at-arms) round out the leadership.  Among this leadership team are extremely accomplished players including Clark and Williams who are both FAMU Sports Hall of Famers and former NFL Players.  Ezell and Hall were both starting quarterbacks for the Rattlers with Ezell holding several of FAMU’s passing records at the end of his career.  Hall was a virtual utility knife playing quarterback, defensive back and punting.

The association emphasizes that you do not have to be a former player to join the FAMU Football Alumni Chapter.  Individuals can be associate members and establish membership into the organization.  “We invite anybody who loves FAMU football and may not have been enticed to join the FAMU NAA previously to consider our organization as we want to be a model group for the continued support of our beloved orange and green.  We say that we’re the Rattler nation, so let’s be that.  I want a nation of former football players to come back and support.  When you give to the football alumni chapter, you can be assured that we’ll direct the funds directly to football.  If you say that we are a nation of Rattlers, prove it by logging on and hitting that donate button,” Hall said.