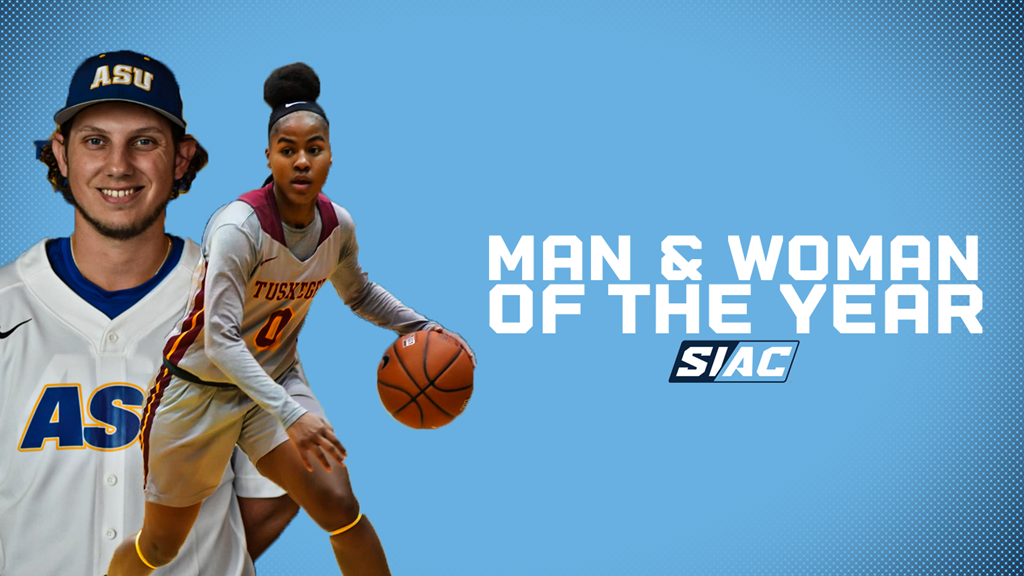 The Man and Woman of the Year Award recognize the top male and female student-athletes for their athletic, academic, service, and leadership involvement.

ATLANTA, Ga. – The Southern Intercollegiate Athletic Conference (SIAC) has announced the inaugural SIAC Woman and Man of the Year honorees, sponsored by GEICO. India Blakely, a women’s basketball player and captain at Tuskegee University, majoring in Occupational Therapy, is the first recipient of the 2022 SIAC Woman of the Year. Lachlan Ross, an international baseball player at Albany State University majoring in Accounting, is the first recipient of the 2022 SIAC Man of the Year.

The Man and Woman of the Year Award recognize the top male and female student-athletes for their athletic, academic, service, and leadership involvement.

“Congratulations to India Blakley and Lachlan Ross for representing the SIAC as our inaugural Man and Woman of the Year,” said Leighton Batiste, SIAC Associate Commissioner of Marketing and Partnerships. “We are elated to submit two student-athletes that represent the best our conference and its member institutions have to offer!”

The selections were modeled after criteria set forth by the NCAA, which requires the evaluation of four guidelines, including a personal statement, the individual’s service and leadership activities, academic achievement, and athletic excellence.

“This honor is a fitting accomplishment of both academic and athletic performance as well as community service commitment by Ms. Blakely and Mr. Ross,” said Tyler Williams, SIAC Associate Commissioner of Communications and Senior Woman Administrator. “Both student-athletes are intentional community leaders who serve as role models on and off the field. They have represented our conference well and are examples of thoughtful leaders who emerge from our league. Congratulations to both of you on this accomplishment!”

“Through my years at Tuskegee, I have learned so much,” said Blakely, “I am thankful for my experiences that have truly shaped my future. These are the lessons I will always take with me with any path I choose.”

After starting her collegiate career at Tuskegee, Blakely helped the Golden Tigers to two Western Division Championship titles. As a junior in 2020, she was named a pre-season and regular season all-conference honoree and was named to the all-tournament team after leading her team to a conference championship runner-up title. She also led the Golden Tigers to be ranked No. 1 in the WBCA National Top 25 Ranking for the first time in 20 years. During her senior year, her honors include being named to the NCAA Division II Black College Sports Network (BCSN) Postseason All-America First Team and the 2021-22 SIAC Preseason All-Conference Team.

Blakely stated about her experience, “Being a student-athlete is not an easy task, but when you can juggle the two, that’s what makes it all worth it.”

Blakely’s accomplishments off-court reflect those on-campus. At Tuskegee, she is enrolled in a 5-year occupational therapy program where she will finish her master’s degree. She is a member of the Alpha Kappa Mu Honor Society and the Occupational Therapy Honor Society and maintains a 3.57 GPA. . Blakely’s workload also included community service, where she serves as the Co-CEO at the Auburn Traumatic Brain Injury Clinic. She was a volunteer who oversaw the clients’ progress and benefited from the free client-centered occupational therapy. She also was a presenter and advocate for HIV awareness, where she was able to speak to faculty and students. Ms. Blakely also assists with free basketball clinics for youth within her community.

“Through these organizations, I have learned the importance of time management and giving back to the community, especially the black community.”

Ross, an international baseball student-athlete from Sydney, Australia, described his experience at Albany State as “life-changing.” After starting his collegiate career at a community college, Ross transferred to Albany State during the COVID-19 pandemic. He described his transition from a small Midwest community college to a large HBCU as an “opportunity of a lifetime to hone in and become the best I can be.”

He is a graduating senior that has maintained a perfect 4.0 while majoring in Accounting. In his senior season with the Golden Rams, Ross collected preseason and all-conference athletic honors helping his team to a conference championship runner-up title.

“Before coming to Albany State University, I had never experienced being a minority. I did not really understand what an HBCU was, given they do not exist in Australia, and was quite surprised to find myself as a minority,” said Ross. “However, this new environment allowed me to immerse myself in an unfamiliar setting and learn from others who are vastly different from myself.”

Ross’ off-court involvement displays his exceptional character and leadership abilities. At Albany State, he garnished SIAC All-Academic honors, was honored with the Board of Regents Outstanding Scholastic Achievement Award, ASU President’s Honor Roll, and was ranked the No. 1 senior in the Accounting department.

“I have pushed my own personal capabilities physically, mentally, and socially further than I ever thought I could,” said Ross. “Throughout this process, I have tried to use my newfound knowledge to bring people up with me and help make their mark on the world.”

Ross served as a leader on-campus through his involvement as a member of the Student-Athlete Advisory Committee (SAAC), a resident assistant, and a student ambassador on-campus. He also served as an area leader with the football gameday operations team. “I would volunteer to tutor teammates and show recruits around the campus,” said Ross. “While some might have seen these tasks as a burden, I loved every second of trying to express how great the community was and try to repay the huge opportunities afforded to me.”

In the community, Ross served as a volunteer evaluator with the local little league teams and a leader in the community service effort entitled “Stash the Trash.” He also served as a member of the Cultural Exchange Club.

“I was able to open my eyes to a different perspective on the world and also open the eyes of others to my unique experience.”