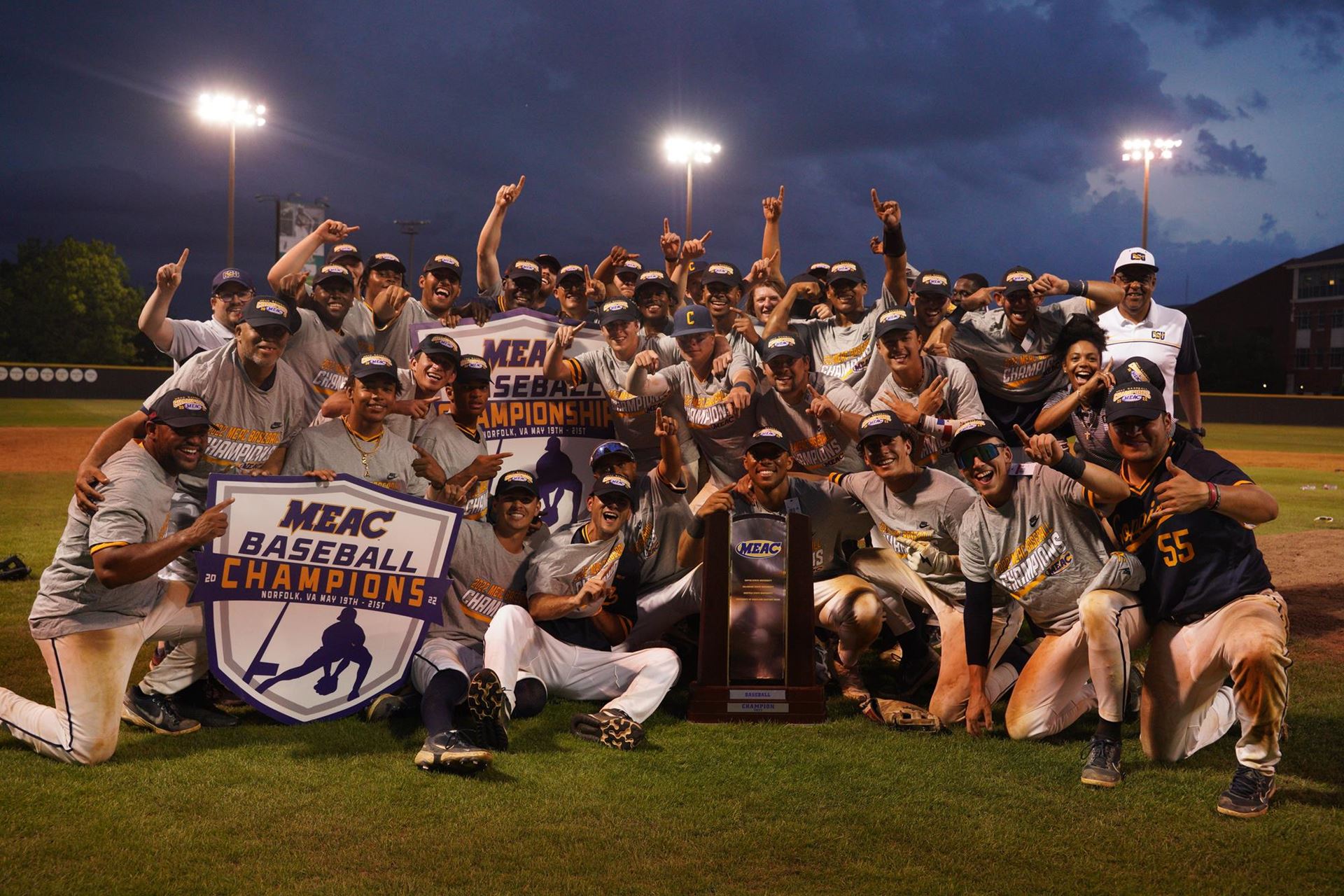 Coppin State earns the title of MEAC
Baseball champion after knocking off top seed Delaware State on Saturday in Norfolk.

The Eagles (24-28) received the MEAC’s automatic bid to the NCAA Baseball Championship; the Selection Show is set for Monday, May 30 at 12 p.m. on ESPN2.

The Hornets (24-23) led 11-10 heading into the top of the ninth inning, with the Eagles already having mounted a rally in the eighth – when Outstanding Performer Brian Nicolas singled home a pair of runs to pull Coppin State within one. But that was mere precursor to what was to come.

Mike Dorcean then doubled to right field with the bases loaded, everyone coming around to score to give the Eagles a 17-11 lead.

Wellington Balsley walked with the bases loaded for the final run, and the Eagles went into the bottom of the ninth with an 18-11 lead.

The Hornets scored a run in the bottom of the frame, but Rashad Ruff shut the door, thanks to a diving catch from Matt Day in center field to trigger the celebration.

After Delaware State won the first game 4-3 to force the if-necessary, Coppin responded in the top of the first by pushing five runs across. Jordan Hamberg got the scoring started with a two-run double, and Landen Argabright followed with a bases-clearing double of his own to give the Eagles a 5-0 lead.

Alan Alonso got the Hornets on the board in the second with an RBI double of his own, and it was the first of seven unanswered runs for Delaware State. By the time MEAC Player of the Yeat Trey Paige hit a sac fly in the fifth, the Hornets had taken a 7-5 lead.

Coppin scored three times in the seventh, highlighted by a Nicolas home run that bounced off the top of the right field wall, and led 8-7 after Marcos Castillo registered a pinch-hit RBI single.

Delaware State answered with four runs in the bottom of the seventh, seemingly taking control again after RBI singles from Miguel Rivera, Paige and Bouldin, as well as a sac fly from Brady Daniels.

Day and Castillo ended up 3-for-4 at the plate, while Nicolas, Argabright and Dorcean each had three RBIs.

Rivera was 3-for-5 at the plate for the Hornets, driving in two and scoring a pair. Alonso drove in a team-high four runs in the high-scoring, back-and-forth affair.