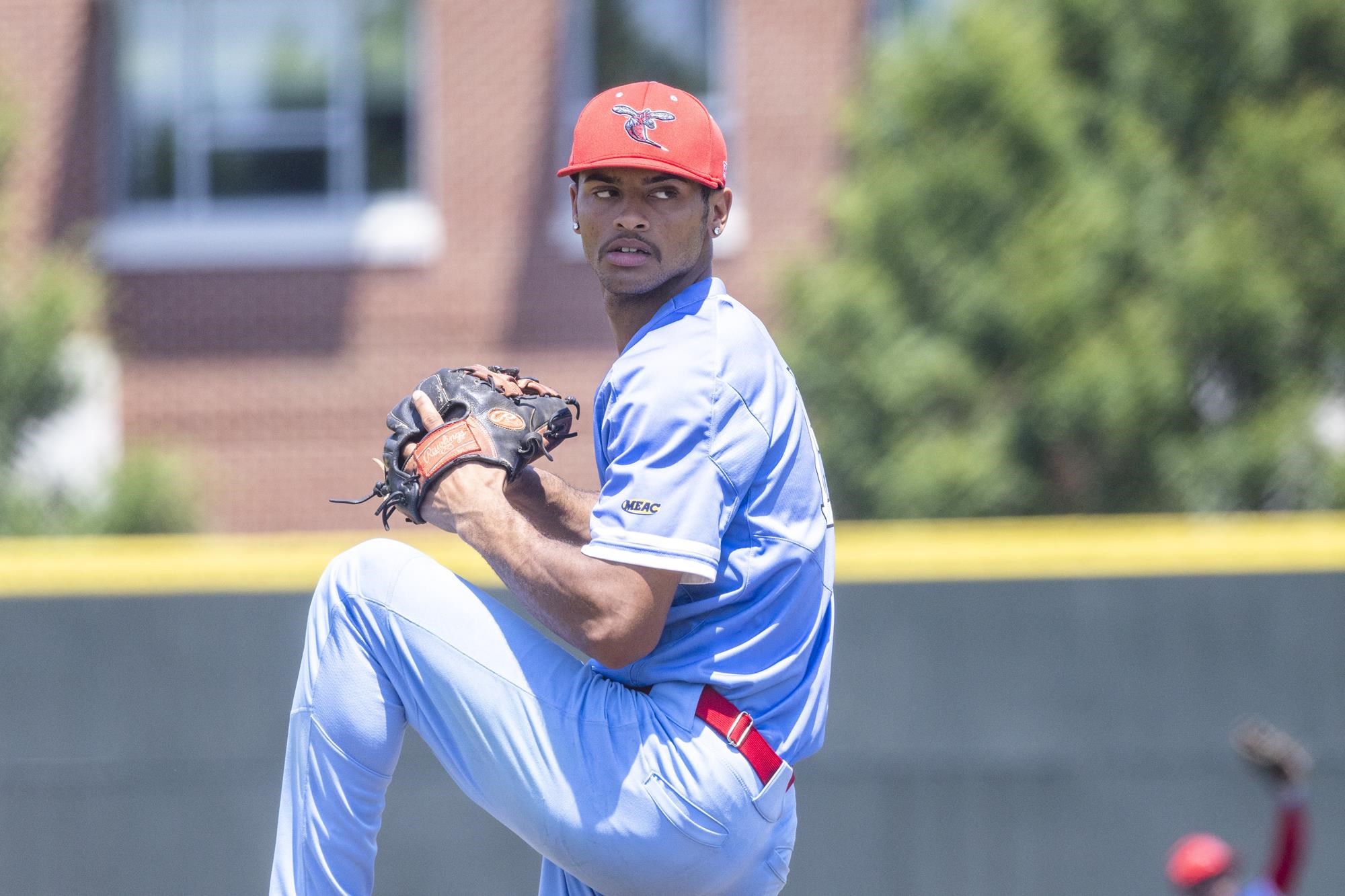 “There’s no way I was leaving this game without finishing,” said Evan Harris, who threw 132 pitches. “We were facing elimination, and everyone put it all on the line today.”

Norfolk, Va. – Evan Harris delivered a pitching performance that Delaware State baseball fans will be talking about for years to come, tossing a season-saving, complete-game, 11-strikeout gem to lift the Hornets to a 4-3 MEAC Tournament victory over Coppin State at Marty Miller Field today, setting up a winner-take-all showdown between the teams for the MEAC baseball championship.
The Hornets have won two straight games to stave off elimination since falling to Coppin State on Friday.

Harris even provided some drama before the final out of the game.
After striking out the first two batters in the Coppin State ninth, he stepped off the mound in apparent discomfort, saying after the game that he experienced “cramping” in his left (non-throwing) arm in the 93-degree heat.
After being evaluated by team medical personnel , Harris stepped back on the hill and struck out Brian Nicolas for the 27th and final out of the game and avenge the earlier tournament loss to the Eagles.
“There’s no way I was leaving this game without finishing,” said Harris, who threw 132 pitches. “We were facing elimination, and everyone put it all on the line today.”
Offensively, catcher Robert Trujillo drove in two runs to lead the Hornets, while Jordan King had two doubles and a run scored. .
Delaware State scored its first run without benefit of a hit in the top of the second inning. Alan Alonso was hit by a pitch to lead off the inning. After stealing  second, he moved to third on a ground out by Alec Rodrigues. Alonso was still on third with one out when he was struck on the right foot by a foul ball lined off the bat of Trujillo. He was down for a short time before springing back to his feet. Alonso eventually scored the first run of the game when Trujillo grounded out to short.
The Hornets put their second run of the game on the board in the fourth. Krew Bouldin reached base on an error to lead off the inning. Two batters later, Alonso drew a walk to put runners at second and first with one out.  There were two outs in the inning when Trujillo singled up the middle to score Bouldin from second, giving the Hornets a 2-0 lead.
After the Eagles scored an unearned run the bottom of the fourth to cut Delaware State’s lead in half, the Hornets answered with two in the fifth to open up a three-run lead.
Jordan King doubled down the third base line to lead off the Delaware State fifth. King later scored on a one-out double to right by Miguel Rivera, who slid home with the Hornets’ fourth run of the game on a sacrifice fly by Trey Paige.