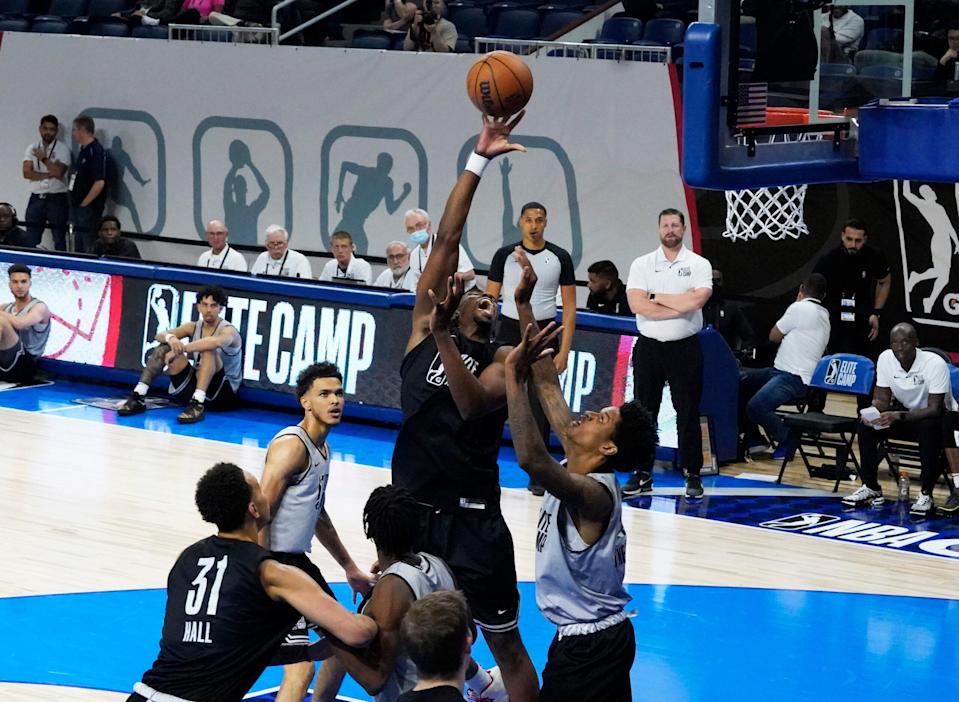 The three HBCU players at the G-League Elite camp got their chances but were not among the seven who advanced to the NBA Combine.

HBCU stars – Kyle Foster of Howard, Brison Gresham of Texas Southern and M. J. Randolph of Florida A&M – were among the 44 players at the NBA G-League Elite Basketball Camp in Chicago. Over the last two days, they competed for a shot to advance to a bigger and better camp with other draft hopefuls.

They were not however among the seven players that got call-ups to remain in Chicago for the NBA Combine over the next three days.

The competition was tough. Foster, Gresham and Randolph had their moments. They just didn’t have enough of them. All three played off the bench in Monday’s two games. On Tuesday, Gresham and Foster started while Randolph again played as a reserve.

NBA Hall of Famer and TNT commentator Shaquille O’Neal’s son, Shareef O’Neal, was one of the 44 competing in Chicago that did not have his name called to play at the combine.

Randolph is the 6-4 2021-22 SWAC Player of the Year and top scorer (18.8 points per game) from an HBCU in Div. I basketball this season. He was most impressive of the three HBCU products at the camp.

Playing for Team One who split its two games, the 6-5 off-guard showed off his scoring ability Tuesday. Randolph was the third leading scorer for his team with 12 points. He canned 3 of 11 shots and made all six of his free throws in a 99-94 loss to Foster’s Team Three. He logged just under 19 minutes.

On Monday, Randolph managed just two points on 1 of 3 shooting from the field with two assists. Team One lost 97-81 to Gresham’s Team Four. Randolph played just 12-and-a-half minutes off the bench.

Foster, the 6-5 all-MEAC first teamer and sharpshooter who hit on 48.5% of his 229 3-point attempts this season to lead all of Div. 1, didn’t get much chance to show off his long range abilities.

In his two games for Team Three, he got off 12 3s but could only cash in on two, one in each game. His 3.6 3s per game this season was fifth in the nation.

Foster was 1 of 7 from the floor in Tuesday’s contest in 19-plus minutes. His only field goal was a 3-pointer as he shot 1 of 6 from behind the arc. He added five rebounds.

He was 1 of 5 from distance on Monday but added a field goal and free throw to finish with 7 points. Foster’s 15.8 points per game this season were third in the MEAC.

Texas Southern (6-9, 240) big man Gresham showed the skills that got him into the camp – rim protection and rebounding.

He had two blocks, seven rebounds and four points in 16 minutes of action off the bench in a 90-87 loss Monday. As a starter, he had nine points, four rebounds and three blocks in his team’s 99-94 win over Team One Tuesday. Over the two games, he hit four of his five shots from the field.

Neither of the three got to showcase their skills in Chicago. The exposure however of getting to the G-League camp should bode well for them going forward.