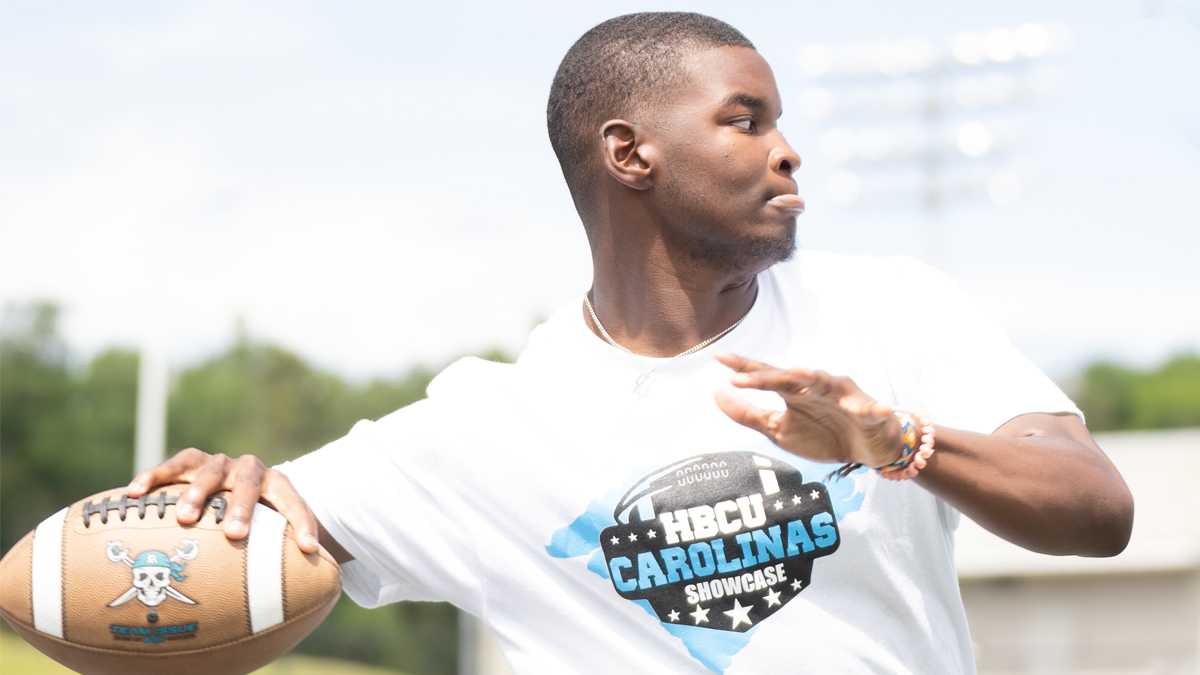 A Charlotte based HBCU football camp brought coaches from all over in front of prospects and HS coaches.

HBCU football camps continue to grow as the spring transforms into the summer.

The inaugural HBCU Carolinas Showcase took place on May 7 in Charlotte, giving HBCU coaches a chance to connect one-on-one with high school talent. Coaches showed up from the CIAA, MEAC, SIAC and SWAC as well as regional PWI programs. A total of 350 prospects as young as the class of 2027 competed in drills and several of them received offers on the spot. The camp was put on by Charlotte Football Insiders.

“You got Deion doing what he’s doing down there. You’ve got other HBCUs that are on the rise. Money that’s been put into programs that haven’t been put into programs for a long time,” organizer Keith McClamrock told HBCU Gameday. “You know, our goal is to make this the premier stop for the Carolinas. We’ve got kids from California, kids from New York, New Jersey, Pennsylvania, Maryland, West Virginia, Virginia, Tennessee, South Carolina, Georgia, of course, North Carolina.”

One of the most active coaches at the camp was Mississippi Valley State running backs coach Dwyan Luckey. The Concord, NC native is also the program’s recruiting coordinator and after attending last July’s HBCU football camp in Atlanta, he decided he wanted to have something similar in his home state.

“I thought Atlanta did a great job and I told Coach McClamrock “we gotta do this in North Carolina,” he said. “To bring the HBCUs out and also bridge the gap with the high school coaches was huge. Me being from North Carolina — and being a product of the 704 — I thought it was very important that guys like myself have an opportunity to see these kids in person and these kids need to see Mississippi Valley everywhere.”

The camp provided Bluefield State recruiting coordinator Donald Manley the opportunity to expose his program to players and coaches as it enters its second year. Manley, who also coaches the offensive line and tight ends, wants to make sure that folks know how close his program is to home despite being a few states away.

“We’re out here just showing face and letting kids know that there are HBCUs in West Virginia. We’re only two-and-a-half hours from Charlotte, so we’re right up the street. Closer than, honestly, some of the HBCUs in North Carolina. So we just want to introduce ourselves, get familiar with these kids, let them get familiar with us — see the logo and everything like that so when we go to the schools and come to games, they’ll know we’re here.”

The camp also gave HBCU football coaches a chance to connect with high school coaches — a topic that was recently brought into the light by Jackson State head coach Deion Sanders in a social media post. Sanders stated that HBCUs and FCS schools often have a hurdle just getting in front of top tier talent due to high school coaches trying to limit access.

Several coaches told us they have experienced similar issues, which is why Saturday’s camp was so important.

Mallard Creek offensive coordinator Joseph Davidyock says he tries to make sure the student-athletes get seen by as many coaches as possible — regardless of what level the school plays at.

“We work very hard for our kids. I’m the recruiting coordinator as well, so I try to make sure that all our information is out there. It doesn’t matter who you are, you’re going to get our list,” Davidyock said. “I might have three coaches send you the same list, but you got it. It just gives everybody an opportunity to be looked at — and we don’t say no to anybody. We try to keep a good relationship with all schools.”

Luckey, who offered several prospects during the camp, agrees.

“I feel it’s all about relationships when it comes to these college coaches. They don’t care who you are — you have to go in there and build relationships,” he said. “This is why this camp has evolved. If I didn’t have relationships with Coach McClamrock he probably would have never listened to the idea. Coach Pittman, he’s one of the best high school coaches to come out of Cabbarrus Co. So it’s about relationships.”