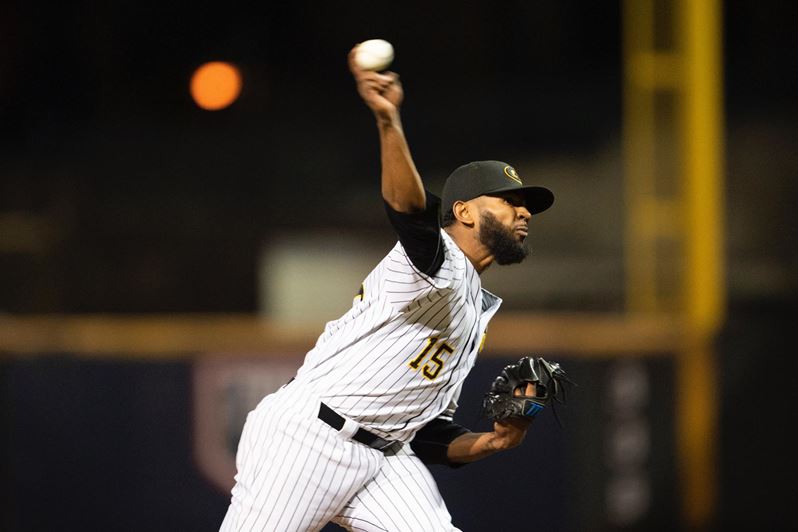 Page threw just 84 pitches in a perfect game, collecting a season and career-high 13 strikeouts in the process, as the Tigers won their third consecutive SWAC game and 11th straight over Alcorn State with a 16-0 victory in seven innings.

Grambling State (16-21 overall, 11-5 SWAC) led 5-0 through two innings, and used a seven-run third inning to pull away from the Braves.

Page was in cruise control from the start, striking out the first two batters in the game. He retired four consecutive Alcorn State batters between the third and fourth innings in picking up his fifth victory over the season.

HOW IT HAPPENED
– Grambling State capitalized on free passes in the opening inning as the Tigers scored two runs and took advantage of an error to grab a quick 2-0 lead
– GSU extended the lead to 5-0 in the second inning on a Jarficur Parkerthree-run homer to left
– The Tigers put the game out of reach in the third inning with seven runs on four hits, while taking advantage of an error
– Julian Murphy reached on an error to begin the frame and moved to second on a Cameron Bufford base hit to left-center
– Aries Gardner walked to load the bases
– With one out, Nasir Frederick was hit by a pitch as Murphy came across to score
– Terry Burrell popped up to the second baseman as Bufford tagged from third and scored
– Parker was hit by a pitch to load the bases and Trevor Hatton singled through the left side to plate Gardner and Frederick
– After a pitching change, John Garciabelted a 1-0 pitch deep over the wall in left to give Grambling State a 12-0 lead
– The Tigers added three runs in the fourth and one more in the fifth for the 16-0 lead

INSIDE THE NUMBERS
– Grambling State scored 16 runs on nine hits and left seven on base
– John Garcia paced the Tigers at the plate by going 3-for-4, with four RBI and one run scored
– Shemar Page (5-4) faced the minimum, 21 batters, with 13 strikeouts in seven innings
– Page now has 98 strikeouts on the season
– Page has five games of 10 or more strikeouts and has fanned 25 Alcorn State batters in two appearances against the Braves
– Tyler Daniels (0-1) made his first start on the mound for Alcorn State
– Daniels surrendered 11 runs (10 earned) on three hits, with seven walks and three strikeouts in 2.2 innings
– Jamaal Green, Jamil Betancourt, Andrew Meadows and Ryan Poston pitched in relief

UP NEXT
Grambling State continues its three-game SWAC series with Alcorn State on Saturday. First pitch is scheduled for 3 p.m. from Wilbert Ellis Field at R.W.E. Jones Park.