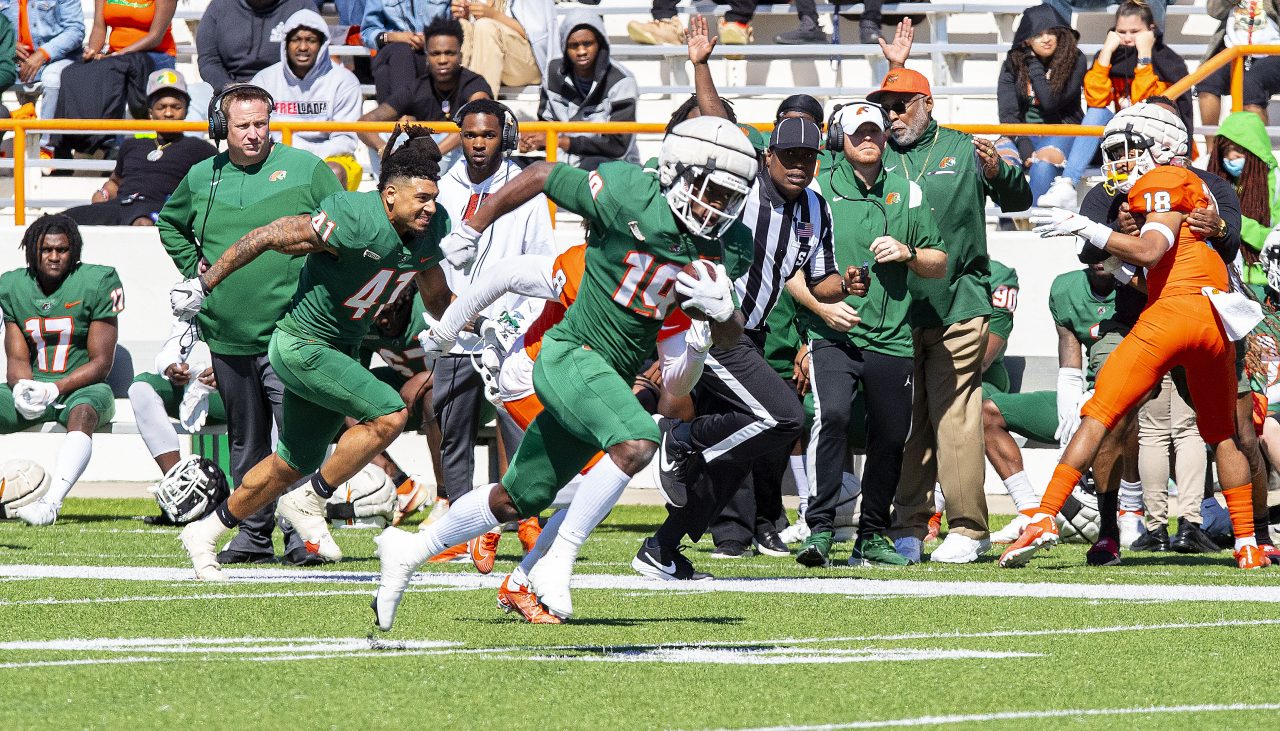 “Both sides made some plays. It’s been a pretty productive spring overall,” head coach Willie Simmons.

TALLAHASSEE, FL–It was everything you expect from a FAMU game atmosphere.  There were vendors outside the stadium, tailgating, the Marching “100”, the FAMU cheerleaders and music.  DJ Loose Kid, the official DJ for rap artist Plies, is also FAMU’s official DJ and he was blaring out of towering speakers in the north end zone, making it more like a festival atmosphere. Two four-star recruits, Darren Lawrence (FSU commit) and Chanz Wiggins, who were in town to see what was going on at FAMU and FSU started at the Orange and Green game, went over the the FSU Garnet and Gold game and ended up coming back over to the FAMU game and enjoying the atmosphere.

Two days earlier, the Rattlers held a draft to divide up the teams.  The in-house broadcast drew thousands of viewers on social media. With coaches jockeying to gather the best players, Saturday presented a time to shine and there were several highlights. No doubt the biggest play of the game was receiver Xavier Smith catching a medium range pass and taking it to the house for about 70 yards.

Head coach Willie Simmons, who was a neutral bystander, was impressed with his team.  “ I thought our guys competed really well.  The orange team came away with the victory, but both sides made some plays.  It’s been a pretty productive spring overall.  There was one injury and we’ll see what that MRI says, but overall it was a very productive 15 days,” said Simmons.

Quarterback battle is on

One thing that many fans wanted to see was the new arm on the squad.  Jeremy Mousa was actually the first quarterback taken in the team draft and he didn’t disappoint.  The Vanderbilt transfer showed why he was highly touted.  The 6’3” Mousa previously led San Bernardino Valley College to a 9-2 record, throwing 37 touchdowns and earning JUCO co-offensive player of the year for the Inland Empire Athletic Conference.  Mousa displayed his arm strength, accuracy and tight spiral.  He also showed an ability to take off and gain yardage.

Rasean McKay, the incumbent at quarterback who won nine games for the Rattlers, also looked solid in the game.  McKay led the orange team offense to exciting plays and extended drives.  McKay, who struggled at the early part of the season, developed into an efficient quarterback last season right in front of the Rattler fans.  His indecision and lack of experience was a part of the Rattlers’ downfall in their 7-6 opening loss to Jackson State last year, but his maturity and composure played a major part in the success of the Rattlers dominating Bethune-Cookman to win the Florida Blue Florida Classic.

Junior Muratovic also showed accuracy with his arm.  The sophomore is known for his escape ability at the quarterback position.  He had some impressive play extensions and crisp throws in the spring game.

Finally, Cameron Sapp showed why he was the top dual threat coming out of Jacksonville.  Sapp was as elusive as a running back and led the Rattlers on extended drives.  He evenly distributed sharp passes to FAMU’s top two receivers in Xavier Smith and Jah’Marae Sheread.  Simmons confirmed that Sapp is in the mix for the quarterback position.

Smith returning to FAMU was a gift to Simmons

One of the biggest reliefs of Simmons’ offseason was the return of Smith who has graduated and was on the cusp of exploring his NFL stock.

“Xavier Smith was the biggest signee this year as he decided to come back for one more year. He’s shown throughout his career that he is one of the most explosive players in college football” Simmons said.

The back and forth in the first half saw not much scoring.  Kicker Jose Romo-Martinez showed his accuracy nailing field goals in extreme wind conditions.  Wind gusts up to 23 mph couldn’t keep Romo-Martinez from pleasing the crowd with field goals made directly into the wind.

NCAA-leading punter Faddoul back for 2022

The Rattlers also got back a familiar face in Chris Faddoul.  Faddoul, who twice led the NCAA in punting, returned to action yesterday.  While not in full uniform, he was punting very well at the Orange and Green game.  Coming off a torn ACL that occurred in a game last season against USF, Faddoul has rebounded nicely.  With former All-MEAC kicker Romo-Martinez and former All-MEAC punter in Faddoul, it could turn into the first specialists duo to earn both All-MEAC and All-SWAC honors.

The Rattlers will enter the offseason looking for a few more pieces.  Coaching staffs in today’s climate understand that with the advent of the transfer portal, you need to keep scholarships available until the start of the season.

The Rattlers open next season on Aug. 27 in Chapel Hill, NC against the North Carolina Tar Heels.  They begin FCS and SWAC play the same as last season on Sept. 4 at Hard Rock Stadium for the Orange Blossom Classic against the Jackson State Tigers.

Sidenote: Former FAMU defenders Markquese Bell and Savion Williams were both on the sidelines for the Orange and Green Game.  Bell was just returning from Dallas where the Cowboys had worked him out at their facility.  He indicated that he will be watching the NFL draft from Tallahassee.  Williams was recently contacted to travel to Baltimore for a workout with the Ravens and has some discussion with the Los Angeles Rams and other NFL teams.