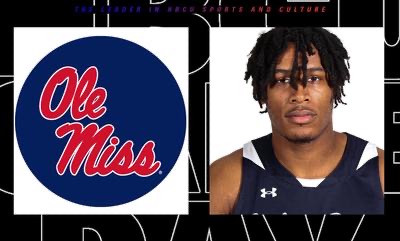 Jayveous McKinnis was a defensive force at Jackson State who could score as well. Now he’s taking his talent to the SEC.

A Jackson State loss is now a gain for Ole Miss.

After announcing his decision to enter the transfer portal last month, 6’7 forward Jayveous McKinnis announced that he will be joining the SEC squad.

“I’m honored by the coaches who’ve reached out and shown interest in me while in the transfer portal,” McKinnis said via Twitter. It wasn’t a easy decision, but I’ve decided to verbally commit to Coach Kermit Davis and the Ole Miss Rebels. I look forward to helping the rebels take over the SEC.”

McKinnis was a force on both sides of the ball at Jackson State, but he really left his mark on the defensive end, winning SWAC Defensive Player of the Year three times in a row, including this season.

McKinnis was a key contributor for head coach Wayne Brent from the start as he won SWAC Freshman of The Year during the 2018-2019 season when he blocked 2.1 shots per game. He began his reign as the SWAC’s top defensive player the following season as he averaged 9.3 rebounds a game along with his 58 blocks and 29 steals.

McKinnis finished second in the nation in rebounding during the 2020-2021 season with an average of 13.2 rebounds per game while helping Jackson State go 11-0 in SWAC play during the regular season.

This past season McKinnis led Jackson State in scoring (12.3 ppg), rebounding (10.2 rpg), and blocks (2.9 bpg) during the 2021-22 campaign. He finished regular season play leading the league in rebounds per game, blocks per game and field goal percentage. He produced 20 double-digit scoring games, 15 double-digit rebounding games, and 14 double-doubles this past season.

McKinnis had entered the transfer portal before and returned to JSU, but that would not be the case this time.