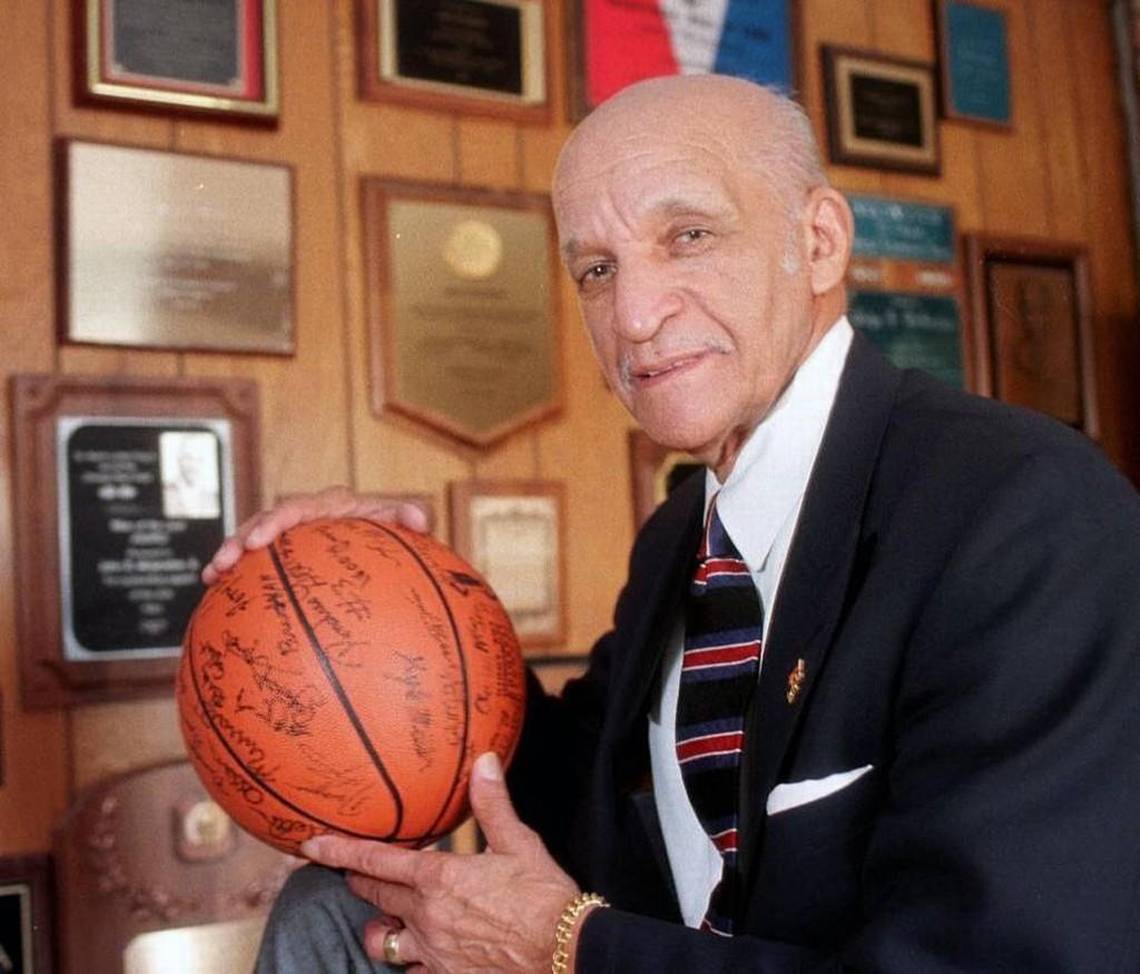 The late legendary coach John McLendon paved the way both on and off the court as he led HBCUs and African-Americans into the NAIA and eventually into the NCAA. Remember and celebrate him this week as the NCAA Final Four tips off in New Orleans.

HBCU hoops teams entered the NAIA national tournament in 1951. Those teams were now poised to make an impact on the national scene. But the struggle was far from over. Discrimination followed in other forms. But Coach McLendon and his cohorts persevered and worked to destroy the barriers to progress. Part II focuses on how and what they did on and off the court.

The NAIA, primarily because of the lobbying work of the National Athletic Steering Committee, led by NC College head coach and administrator John McLendon, and other entities, accepted its first HBCU institutions in 1951. But by 1953, the NAIA placed all the HBCUs, regardless of location, in one District – the infamous District 29.

The NAIA then set up an eight-team HBCU tournament to determine the team that would advance to Kansas City. The eight-team HBCU format was known as the National Athletic Steering Committee or District 29 championship. This was another form of segregation. While the predominantly white teams played in 31 regional districts around the nation, the HBCUs all had to play each other to choose a HBCU or NASC national champion before going to Kansas City.

Additionally, HBCU teams did not stay in the same hotels as the HWCU (Historically White Colleges and Universities) once in Kansas City. Their players had to stay in black hotels and eat in black-owned restaurants. McLendon and his cohorts were determined to end all these discriminatory practices.

In 1953 and 1954, Tennessee A&I (now State), then coached by Clarence Cash, defeated the other HBCUs to win the District 29 title. The Tigers won the NASC championship in 1953 over Floyd Brown’s NCC squad (94-90) that included HBCU and future NBA and Boston Celtics legend Sam Jones.

In 1954 after winning the NASC title again over Brown’s NCC team, Cash’s troops fell in the first round in Kansas City to Regis (Colo.), 61-58. McLendon left Hampton to become the coach at Tennessee State in 1955.

HBCU Hoops: McLendon on the scene

In 1955, it was Texas Southern, coached by Ed Adams and led by Woody Saulsberry, Benny Roy and Benny Swain, who emerged as the District 29 or NASC championship winner and made it to the national tournament. TSU posted a first round win over Adrian (102-83) before succumbing in the second round to Gustavos Adolphus (67-55).

In 1956, District 29 was split into East and West Divisions. While still having all the HBCUs, the district now had Historically White Colleges and Universities (HWCUs) from the regions in the divisions. Adams and TSU won the West Division and prevailed over East Tennessee State for the district title.

According to Milton Katz’s book on Coach McLendon, “Breaking Through” published in 2007, the coach lobbied NAIA President Al Duer prior to his 1956 team coming to the national tournament to end the segregated lodging for the teams. Some accounts say McLendon lobbied to end both District 29 and the housing discrimination as early as 1954.

Texas Southern also made the 32-team field in Kansas City and won two games before succumbing to Pacific Lutheran (91-72) in the Elite Eight.

McLendon told this reporter that he told NAIA officials that he would not bring his championship winning team back to the Kansas City if the same lodging was not open to all teams.

In 1958, Tennessee State (A&I) and Texas Southern both returned to Kansas City.

An unprecedented three HBCUs made it to the NAIA Big Dance in 1959. McLendon’s Tennessee State team was joined by fourth-seed Grambling under Fred Hobdy and Kentucky State.

Both Grambling (88-81 to Lenoir Rhyne) and Kentucky State (72-65 to Central Oklahoma) bowed out in the first round.

Barnett, who was on board for all three titles, repeated as winner of the Chuck Taylor Award. Over the three seasons, the left-handed Barnett with the fold-up jumper where he kicked his legs while in the air, averaged 25.1 points per game in the three national tournaments. He scored 3,209 points in his TSU career. That record has stood since 1959. As a professional, Barnett also won the MVP award in the American Basketball League (ABL) and two NBA titles with HBCU legends Willis Reed and Earl Monroe with the New York Knicks.

McLendon is the only person to be enshrined in the Naismith Memorial Basketball Hall of Fame as both a coach and a contributor. He left Tennessee State after the 1959 title to become the first professional African-American basketball coach with the Cleveland/Pittsburgh Pipers.

After the success of McLendon and his cohorts in the NAIA, the NCAA responded in 1956-57 by creating a small college (later Division II) national tournament and accepting HBCU’s as members.  Jackson State participated in the first round of the 1957 tournament but was forced by white segregationists to withdraw when it was matched against a white team from the Midwest.

The way Texas-El Paso Associate History Professor Charles H. Martin in a 2011 blog post of his book, Benching Jim Crow, The Rise and Fall of the Color Line in Southern College Sports, 1890-1990 says it, “In order to compete with the NAIA, the NCAA responded in 1956-57 by creating a small college (later Div. II) national tournament and accepting HBCUs as members.The NCAA Tournament had begun in 1938.”

Martin continues, “Eventually most HBCUs joined the NCAA and (many) moved up to Division I status. There, due to the loss of the top African American athletes to white universities and the limited financial resources made available to them by tight-fisted state legislatures, HBCU teams fell back into the shadows of national competition. Nonetheless, their earlier history, mostly forgotten today, reveals part of the complicated history of American race relations and college sports.”

Part III chronicles the great HBCU teams and coaches that went on to make the NAIA finals or win NAIA national titles.