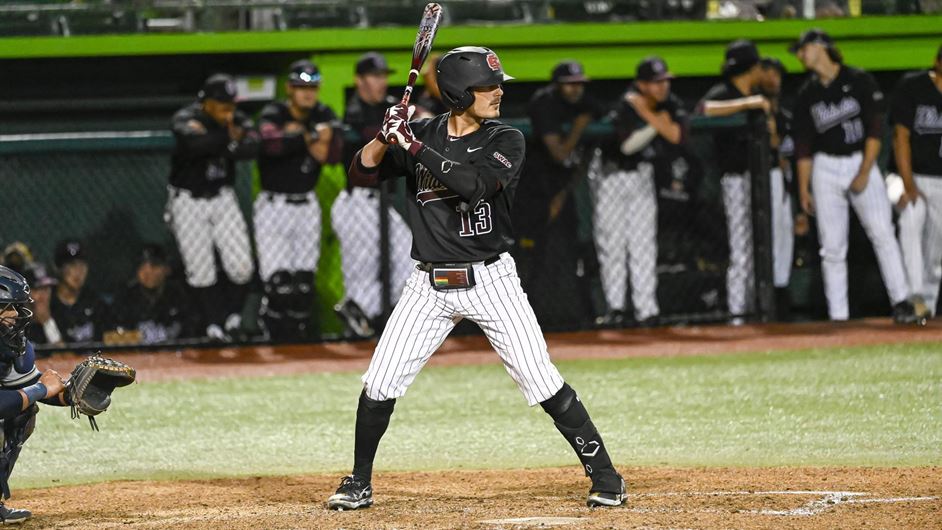 Wildcats and Hornets go to extra innings in Daytona.

Daytona Beach, Fla.  – Two teams entered undefeated in SWAC play, and only one team remains after the Wildcats walked off the Hornets Friday night on a hit-by-pitch in the eleventh inning to improve to 4-0 in conference play.

The Wildcats (9-12, 4-0 SWAC) cracked the scoreboard first in the bottom of the second. Manny Souffrain singled to open the frame, Brian Perez walked, and Franki Febles singled to center field to give the Wildcats the 1-0 lead.

Alabama State (11-11, 3-1 SWAC) responded and took the lead in the fourth with three straight two-out hits, scoring two. They threatened again with runners on first and third and one out in the fifth, but Lipthratt forced a double play to escape unscathed.

The Wildcats regained the lead in the fifth. A sacrifice fly from Malik Stephens scored Febles to tie things at two. Two batters later, Christopher Patterson knocked in Colton Olasin with another long fly ball as the Wildcats took the 3-2 lead.

B-CU tacked on a fourth run in the sixth on a dropped infield popup that scored Brian Perez.

Alabama State cut the lead to one in the seventh when a bouncing ball got by Olasin at second – a second Wildcat error in the inning brought a runner all the way around to score from first.

The Hornets tied the game in the ninth with a solo home run over the right field wall, and the game went to extras.

The Hornets threatened in the eleventh with a leadoff walk. The runner tried to advance from first to third on a single down the right field line, but Febles threw a laser to Perez from the outfield to gun the runner down at third.

B-CU loaded the bases in the eleventh after two walks and a single. Febles came to the plate with two outs in the inning and quickly fell down 0-2 in the count before a pitch sailed too far inside. The hit-by-pitch ended things as the Wildcats won, 5-4.

“This is a resilient group,” Wildcats head coach Jonathan Hernandez said after the game. “I’ve said it from day one – These guys believe. Even when Alabama State tied it, we knew we had a chance to score and go home – it worked out in our favor tonight.”

Hernandez applauded the efforts of his lineup against one of the SWAC’s top arms.

“We did a good job applying pressure,” Hernandez said. “We knew what our game plan was, Coach Carballo did a great job putting the gameplan together, and we stuck with it. Alabama State is a great ball club. Our guys compete and do what we need to do.”

Brenton Fisher got his second win of the season. The Wildcats closer threw a season high three innings, allowing two hits, no runs, walking two, and striking out three.

“Louis competed all night and Billings did well,” Hernandez said. “For Fisher to be able to come in and give us three innings – which we haven’t seen all year – having a guy like that to set up our pitching for the rest of the week is huge.”

Up Next
Game two of the three game series is scheduled for Saturday night at 6 p.m.