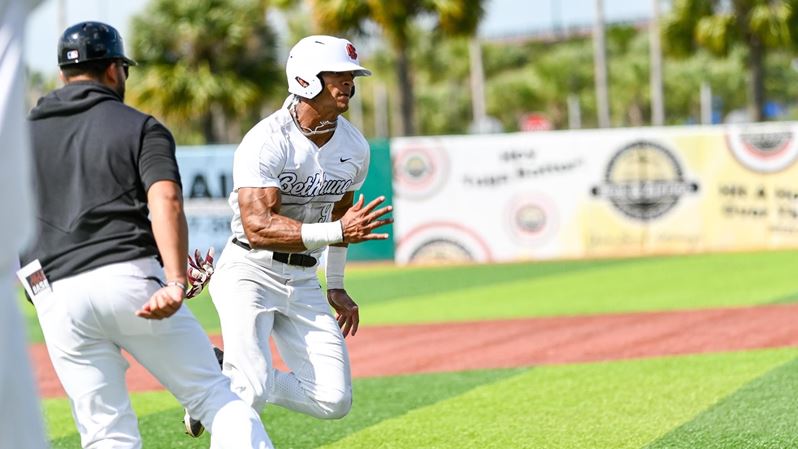 Daytona Beach, Fla.  – Trailing 6-1 in the sixth, it looked like Bethune-Cookman would have to settle for a 1-1 start to conference play – Five innings later, a single, a steal, and a walkoff sent the BCU home, 9-8.

Jackson State (10-8, 0-1 SWAC) jumped out in front in the first inning with three extra base hits off of starter Nolan Santos, scoring three runs.

The Wildcats (6-11, 1-0 SWAC) grabbed one back in the bottom of the first. Christopher Patterson singled to center and came all the way around to score on a failed pickoff that sailed deep into foul territory.

Santos settled in after a rocky first inning, retiring eight straight batters on the way through the fifth inning.

The Wildcats loaded the bases in the fifth, but could not capitalize.

Jackson State added a run in the sixth with a pair of singles. A walk to load the bases chased Santos from the game. Gabriel Perez came on in relief. A first-pitch bunt scored another run, and a single to left scored two to give JSU the 7-1 lead.

The Wildcats rallied to tie things up in the sixth with six runs. Bethune-Cookman loaded the bases again, and pinch hitter Brian Perezsingled scoring one. Manny Souffrain, also pinch hitting, dumped a ball into right field, scoring two more. Up next, Franki Febles sent a ball deep into the gap in right center, scoring another pair of Wildcats. Colton Olasin tied the game with a sacrifice fly.

Jackson State opened the seventh with a double, but the runner advanced to third on a throwing error. A single brought a run home to pull the Tigers ahead, 8-7.

Boris Peña opened the eighth with a double, advanced on a fielder’s choice, and came around to tie the game on a Febles sacrifice fly. Through nine innings, the game was tied, 8-8.

The Wildcats put two on with one out in the tenth, but could not score.

Jackson State struggled to generate any offense in extras, and the game moved to the bottom of the eleventh. Malik Stephens opened the frame with a single. As he has done 11 times this season, Stephens stole second base to put himself in scoring position for Matthew Garcia.

Garcia came through, dumping a hooking double down the right field line for the walkoff.

“We saw again the grit, the fight, and the competitive spirit in our guys today,” Wildcats head coach Jonathan Hernandez said. “Teams that are down seven runs late in a ballgame cave in. These guys trust the process. It worked out for us.”

Santos turned in 5.1 innings, allowing seven runs, all earned, on five hits, three walks, and four strikeouts. Gabriel Perezwent an inning, allowing four hits and a run with a walk.

Faced with a deficit, the Wildcats never backed down.

“We just came together,” Hernandez said. “It’s a game. We had 12 outs to play with. We settled our guys in, put together quality at-bats and took advantage of our opportunities. I’m proud of the fight in our guys today.”

Dale Michaud was nearly flawless in four huge innings of relief. He threw 55 pitches, allowing only one hit and two walks. He allowed no runs and struck out four.

“It starts with his outing at Florida State,” Hernandez said. “He had a good outing and it was a confidence-builder for him. It’s huge for us that we have another guy we can count on late in these games. I’m proud and happy for Dale after that performance today.”

The Wildcats turned to closer Brenton Fisher in the eleventh. He was credited with the win, striking out one and setting up the Wildcats for the walkoff.

Malik Stephens’ legs continue to be a difference-maker for the Wildcats as he ran his way into scoring position for the winning run.

“It’s a huge part of our offense,” Hernandez said. “I told him in that eleventh – you get one pitch to steal. He did what Malik does.”

Up Next
The Wildcats will look to open SWAC play with a sweep of Jackson State, tomorrow at noon at “The Jack.”