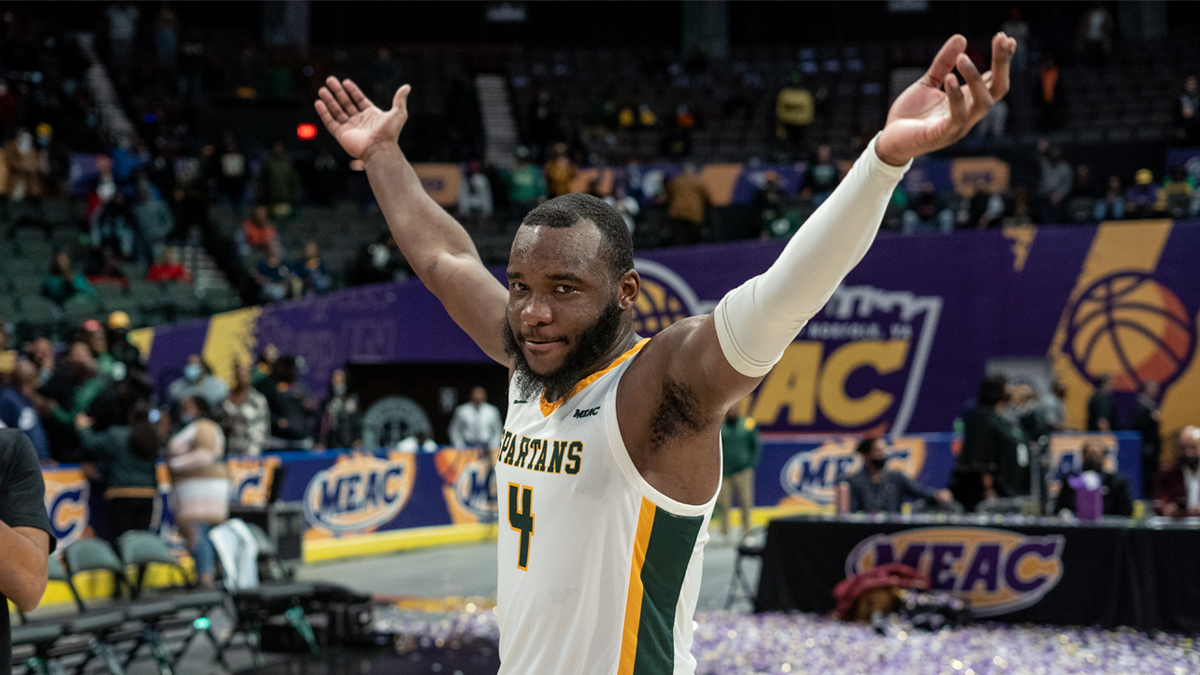 Norfolk State enters the Selection Sunday hoping it has earned enough respect not to be a 16-seed.

They say you never forget your first time, but the second time around might have been sweeter for Norfolk State.

NSU repeated as MEAC Tournament Champions on Saturday by knocking off a scrappy Coppin State team. It was the second MEAC Tournament title in a row for the program, but this one came under the weight of expectation. Whereas NSU’s 2021 MEAC Tournament and ensuing NCAA run was the story of a team emerging from the pack, the 2022 title is one that came by fending off the rest of the pack. The defending champs led the conference from start to finish, with every other team in the league looking to take the crown.

Leading the way for NSU was Norfolk native Joe Bryant with 20 points. Bryant came into his own in last season’s MEAC run, and he followed that up by winning MEAC Player of the Year during the regular season and repeating his Most Outstanding Player performance in this week’s tournament. This year was a new feeling for Bryant, who didn’t get to play in front of a sizable crowd in 2021 due to COVID-19 restrictions.

“It means a lot,” Bryant said. “To play in front of the city of Norfolk, my hometown to bring a championship back to the school it means a lot. Because we are the first team to win a (MEAC) regular season and a tournament and the first team able to go back-to-back.”

Bryant also got plenty of help from guard Jalen Hawkins who scored 17 points in the title game and averaging that for the duration of the tournament. The Robert Morris transfer came on big in the NCAA Tournament last year and knew coming into this season he would have an expanded role.

“Coming into this year, coach told me I had to step up and play a bigger role in the lead the younger guys and the new guys,” Hawkins said. “So I was already putting my foot in that shoe and taking on that role.”

NSU will find out its NCAA Tournament fate on Sunday afternoon. Last season the team received a 16-seed, earning it a spot in the First Four and a date with Appalachian State. NSU would go on to win that game, its second NCAA Tournament win of its Division I era. It will enter this year’s tournament with a 24-6 record, and Robert Jones is confident his team deserves a better seed this time around.

“I mean, I think we should be better than 15, honestly,” Jones said when asked about his team’s seed. “I think that we’re 24-6, it’s about time people stop disrepecting the MEAC. It’s a lot of good teams in the MEAC…even Coppin, they may be 9-23 but they’re a good team. So I think it’s time to stop that non-sense, giving us the 16th seed and all of that.”

Only one team in MEAC history has gotten a seed higher than no. 15. North Carolina Central received a 14-seed in the 2014 NCAA Tournament as it entered with a 28-4 record.

As much as NSU would like a better seed, the program and the league have thrived in the no. 15 spot in the past. Twenty five years ago Coppin State knocked off South Carolina. Former MEAC school Hampton did the same thing 21 years ago. The last MEAC team to do it — Norfolk State in 2012. Ten years later, it might get the chance again.