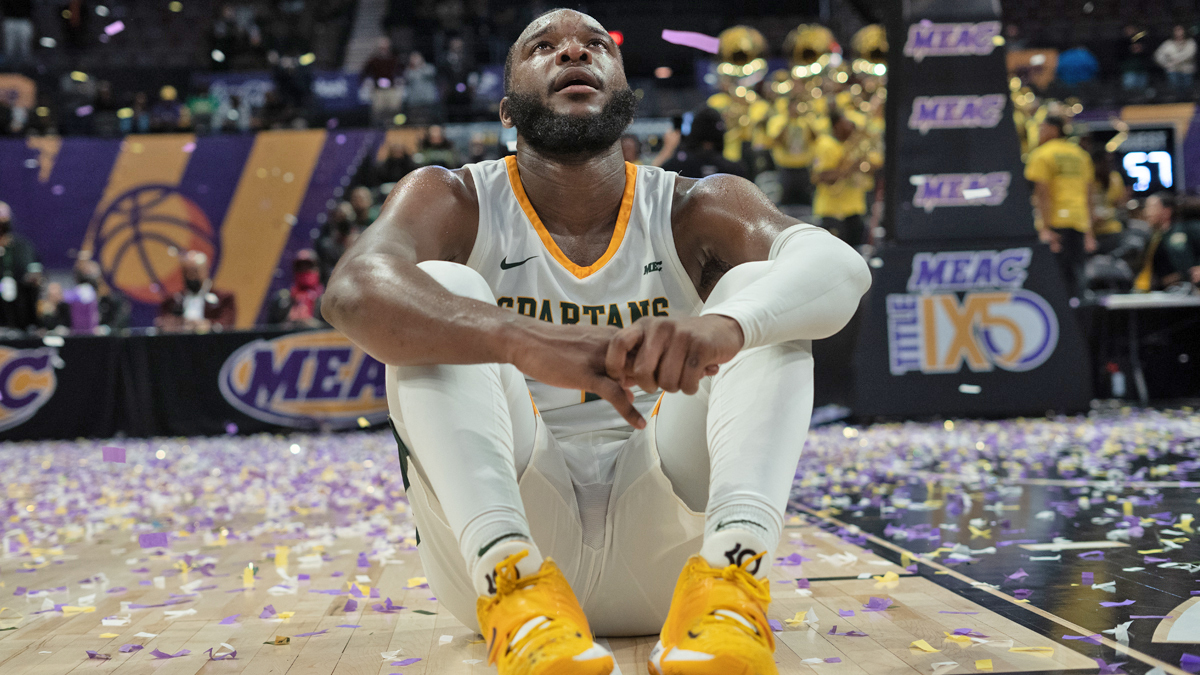 Norfolk State senior Joe Bryant looks up to admire his and his team’s performance in knocking off Coppin State 72-57 in the championship game of Saturday’s MEAC Tournament. Bryant had a game-high 23 points to repeat as Tourney MVP as the Spartans repeated as champs.

NORFOLK, Va. – Norfolk State and senior guard Joe Bryant Jr. repeated as MEAC champion and Most Outstanding Player as the Spartans ended the upset bid of 7th-seed Coppin State, 72-57 in the championship game of the MEAC Basketball Tournament at Scope Arena.

The win will send the Spartans (24-6) back to the NCAA Tournament’s Big Dance with the automatic bid that goes to the MEAC’s tournament champion.

Bryant, this year’s regular season player of the year, punctuated his game-high 23-point performance with a 3-pointer in the final half-minute. The 6-1 Norfolk native hit 7 of 14 shots from the field and 5 of 9 3-pointers to lead the Spartans.

The key however was NSU’s ability to prevent the long-shooting Eagles from ever finding a rhythm. Or perhaps it was weary legs and fatigue that did the Eagles in after playing the late-night game in Friday’s semifinals.

Coppin State lives, dies by the 3

It was a different story early. CSU scored its first four baskets on 3-pointers and was tied 12-12 after the first 12 minutes. Norfolk State led 24-20 in a slow-moving first half.

The game was halted with 17:26 left in the second half with Norfolk State up 32-22, its first double-digit lead of the game. Officials reviewed a tussle under the basket between Hawkins and CSU big man Justin Steers for five minutes.

Technical fouls were called on both players. Zarzuela missed both free throws for CSU and Bryant converted both for NSU. On the ensuing possession, Hawkins drained a three to put the Spartans up 37-22. The five-point swing swung the momentum heavily towards the Spartans.

The Eagles only cut the deficit below double-digits once from there, at 47-39 with 11:41 left.

Norfolk State, with a sterling 24-6 mark, will be looking for a seeding much better than the play-in position that followed last season’s 16-8 record.

642
The Latest in HBCU Sports and Culture