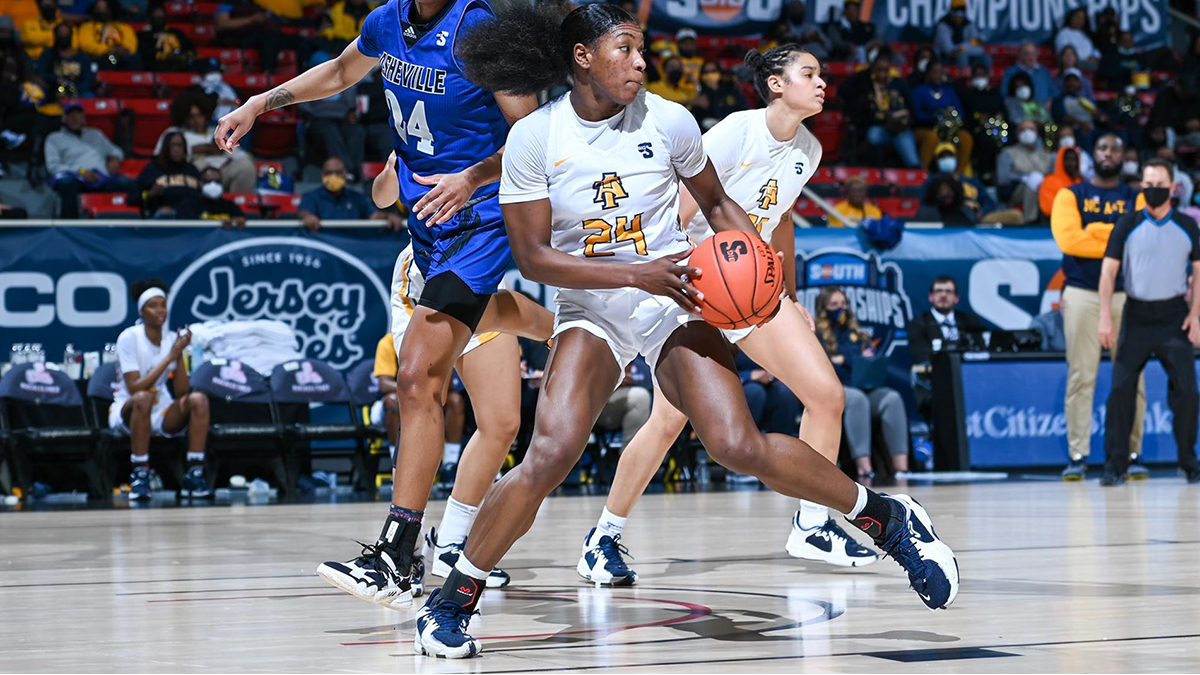 The only appearance by North Carolina A&T women’s basketball will be recorded as a loss in Bojangles Coliseum.

CHARLOTTE, N.C. – North Carolina A&T’s first and last season in the Big South Conference did not end well for the women’s basketball team Tuesday night at the Bojangles’ Coliseum.

In the first round of the Big South tournament, the sixth-seeded Aggies were upset by the 11th-seeded UNC Asheville Bulldogs, 69-59. As a result, a&T’s season came to an end at 14-15. The Aggies were 11-7 in the Big South in their first year in the conference.

UNCA got off to a terrific start and led 43-26 at halftime by shooting 60.7 percent from the floor. UNCA sophomore forward Abigail Wilson made things worse for A&T when she opened the second half with a jump shot to put the Bulldogs ahead by 19.

The Aggies then began to mount a response. Graduate Kiana Adderton started the rally when she took a pass from freshman Jordyn Dorseyand scored on a jumper. Then, sophomore D’Mya Tucker scored two straight buckets to get the Aggies to within 13, with 6:17 remaining in the third quarter.

After a Bulldogs free throw, a 3-point play by sophomore Faith Blackstone cut UNCA’s lead to 50-45 with 1:19 to play in the quarter.

The Aggies had a chance to cut into the lead more, but an Aggies turnover led to a transition layup by Jordaynia Ivie to put the Bulldogs up seven. But the Aggies scored the final four points of the third, turning a 19-point deficit into a three-point deficit, 52-49, over nine minutes of action.

But the Aggies turned the ball over twice in their first two possessions of the fourth quarter. UNCA took full advantage by going on an 11-2 run over the first four minutes of the fourth to take a 63-51. The closest the Aggies got the rest of the way was eight.

“We had some opportunities in the second half to tie the game up,” said Robinson. “But they didn’t stop fighting and got the results they wanted.”

Now Robinson and crew will be looking for the results they want in a new conference next season as they enter the Colonial Athletic Association (CAA). They will do it without Scott, who scored 623 points in two years in an Aggies uniform. The Aggies will also lose Harris, an honorable mention all-conference performance in the Big South, and Adderton, who scored 1,000 points in her collegiate career.

Three-point shooting threat Shareka McNeill was also honored on A&T’s Senior Day, which means the Aggies may be without their top four scorers from the 2021-22 season as they go into the 2022-23 season. Four-year senior Jasmen Walton and point guard Kennedy Boyd were also honored on Senior Day.