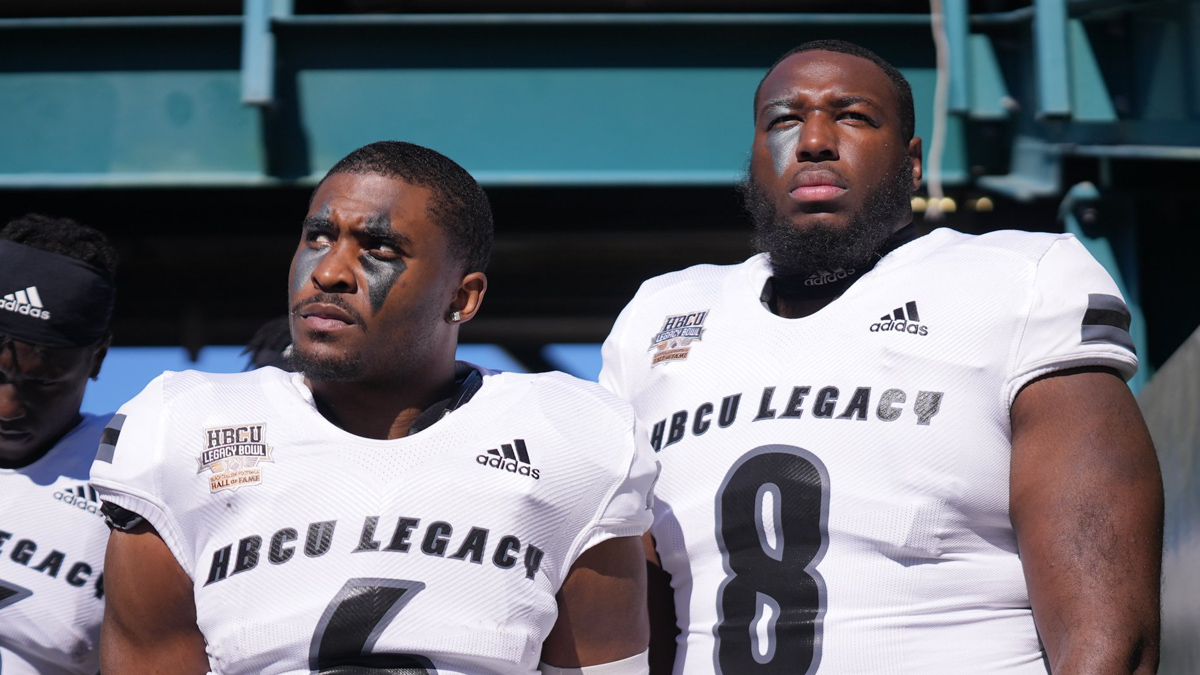 The inaugural HBCU Legacy Bowl is in the books. Here are some observances from the big day in NOLA, including standouts.

The HBCU Legacy Bowl sought to showcase much of the draft-eligible talent coming out of HBCU Conferences this year. The game itself was a success, from the week long combine-style practices to giving players access to additional resources such as career fairs.  Saturday’s game saw Team Gaither, constructed with mostly MEAC and CIAA players, topple Team Robinson, constructed with mostly SWAC and SIAC players.

Here are some takeaways from the game:

The quarterback to watch wasn’t who you thought

Much of the fanfare coming into this game at the quarterback spot was on Alabama A&M quarterback and 2021 SWAC Offensive Player of the Year Aqeel Glass.  By the numbers, Glass didn’t have a good game (4-15, 51 yards). Numbers don’t tell you the full story though, as his targeted receivers suffered from a case of the drops several times. Glass was largely accurate on his passes, especially on one downfield pass were only his receiver could catch the ball, only for the receiver to let it slip through his arms.  Glass exhibited great pocket presence, and was patient even with an offensive line that struggled for much of the afternoon.

The triplet of Team Gaither quarterbacks were efficient, with all three players directing scoring drives. Offensive MVP Geremy Hickbottom (Tennessee State) started and struggled early, but recovered to lead a scoring drive in the second half. Ultimately, he went 9-for-15 for 72 yards, with 25 yards rushing and a rushing touchdown. The 2021 MEAC Offensive Player of the Year Juwan “Pootie” Carter (Norfolk State) went 3-for-6 passing for 50 yards, tacking on an additional 17 yards rushing, including a rushing touchdown.  The CIAA’s 2021 Offensive Player of the Year Bryce Witt (Chowan) lead all quarterbacks with 15-21 passing for 131 yards and a touchdown, and an additional 32 yards rushing.

Team Robinson couldn’t get much going on offense because of the aggressive Gaither defensive line.  Scouts watched defensive lineman Da’shaan Dixon (Norfolk State) all week, and he didn’t disappoint with his quick recovery speed on tracking rushers down and notching 1.5 tackles for loss.  Linemen Javon Frazier (Virginia State), Christopher Myers (Norfolk State) and Antonio Golden (Fort Valley State) all notched a sack, and those numbers pale the one sack registered by Team Robinson (Loren Young, Langston).

Team Gaither turned the first half into a turnover party

Team Robinson’s struggles in the passing game where receivers couldn’t haul in receptions also turned into problems holding onto the ball.  In the first quarter, Tevin Singleton (Bowie State) recovered a fumbled forced by Aaron Howard (Howard). In the second quarter, Wesley Bowers (Bowie State) forced a fumble that was then recovered by Javon Frazier (Virginia State). Those two plays killed drives that Team Robinson needed points on just to keep up with Team Gaither.

Certain defensive players stood out as the game wore on

Team Robinson’s defense spent a lot of time on the field (39 minutes to be exact), and that gave a lot of players time to show scouts what they can do. Florida A&M teammates Antwan Collier (the game’s Defensive MVP) and Derrick Mayweather did about all they could to try to stem the tide, and were the game’s two top tacklers by statistics.  In fact, the combination of those two plus fellow FAMU defensive tackle Savion Williams combined for a quarter of Team Robinson’s total tackle output, showing how physical FAMU’s defense was in 2021.

The McClain and McDaniel tandem was worth the price of admission

Marquis McDaniel (Southern) and Ryan McDaniel (NC Central) were the trusty targets of the three Team Gaither quarterbacks.  The quarterbacks targeted M. McDaniel eight times, and he caught seven passes for 84 yards.  R. McDaniel was right behind him with five targets, four catches, and 51 yards.  More impressively, both receivers, who stand at least 6’2, caught passes at various points on the field, and functioned very well as possession receivers.

Bonus: The big winner from this game was….the CIAA

This conclusion may be an unpopular opinion, but the CIAA’s players led the HBCU Legacy Bowl in total offensive output (Witt), were involved in both turnovers in the game (Frazier, Bowers, Singleton), and scoring (Calil Wilkins, Bowie State).  Team Gaither’s defense included Devon Hunt (Shaw) tying for the most single tackles on that team with four as well. Kicker Jefferson Souza (Virginia Union) converted a 21 yard FGs and converted 1/3 PATs.  The MEAC and SWAC receive much publicity during the year, but the CIAA clearly outshone its Division II counterpart, the SIAC, and showed that its schools are recruiting individual talent on par with its FCS competitors.