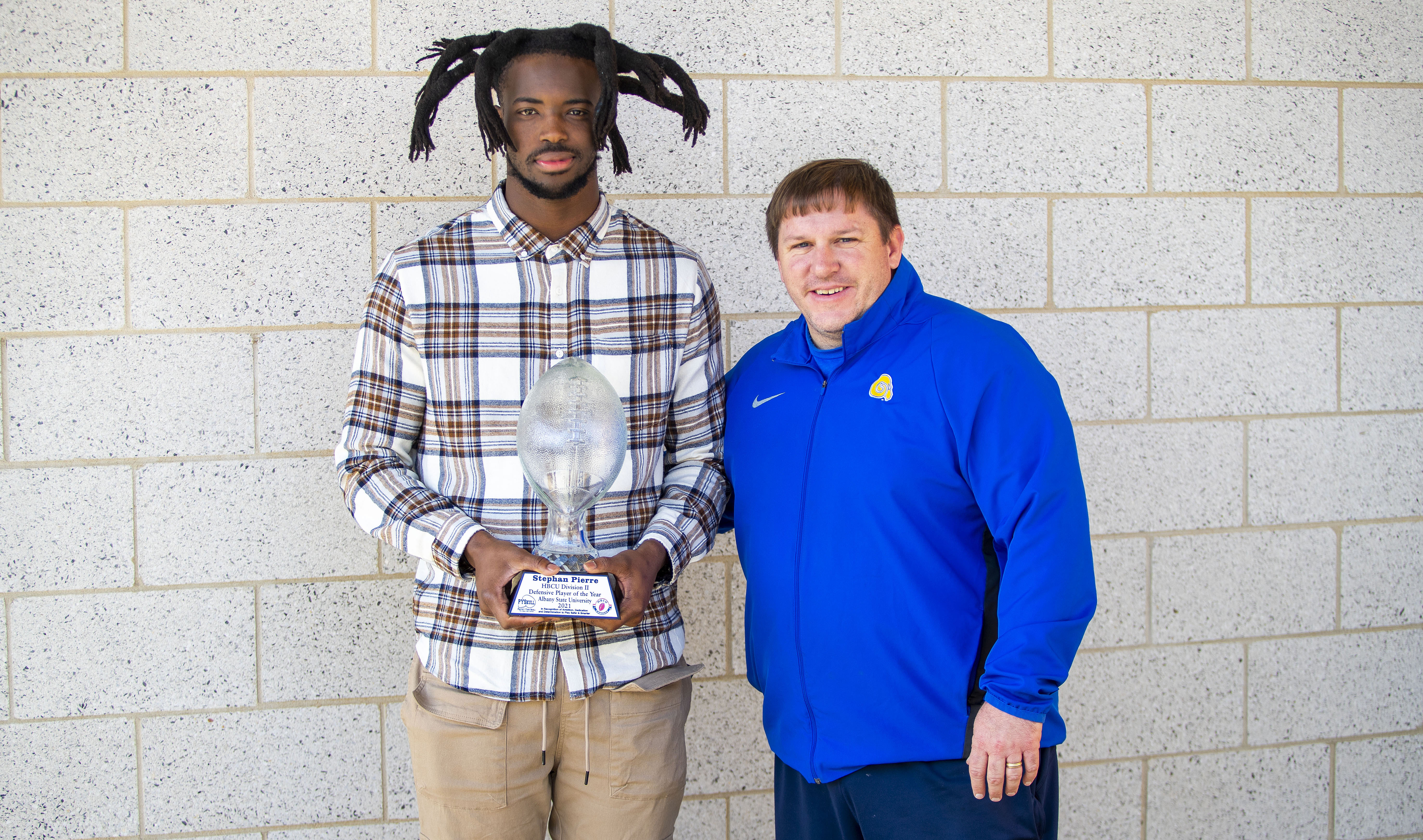 The accolades just continue to roll in for Albany State linebacker Stephan Pierre after his stellar 2021 season.  Pierre was selected as First team All-SIAC, SIAC Defensive Player of the Year and the SIAC Overall Player of the Year For helping the Golden Rams win the 2021 SIAC football championship.  With all of those awards wrapped into one player, it identifies the unique talent Pierre showed on the field this season.

Pierre was awarded the Protect Your Skull/HBCU Gameday 2021 Division II Defensive Player of the Year on Wednesday.  The award is a nice crystal football and a personalized leather business folder.

Accompanied by his head coach, Gabe Giardina, Pierre accepted the trophy from HBCU Gameday on the ASU campus at the Jones Brothers Health Physical Education and Recreation Building on the East campus, merely 100 yards from the ASU Coliseum where the Golden Rams play their home games.

The sophomore linebacker controlled the field from sideline to sideline by leading the league in individual tackles (56 solo tackles).  He also was credited with one sack for the season.  The Florida native had two fumble recoveries as well as solid defense when dropping back in coverage.

He led the Albany State defense to an undefeated conference record and a conference championship season.  The Golden Rams topped the conference in total defense, allowing just 197.6 yards per game, and led the league in rush defense and pass defense. ASU was also No. 1 in pass defense efficiency, allowing just 107.2 yards passing per game.  The key to ASU’s defensive success was a result of their defensive line and linebacker’s ability to stop the run, who allowed just 89.8 yards per game.

Pierre was honored to receive the award.  “Last season was fun with my teammates.  Just to be with my guys and play as a family,” Pierre said.

“It was enjoyable to watch one game day, but in practice it was kind of rough.  He’s been playing for a while for us and it’s like a constant…someone you know you can count on out there,” he said. ” Someone who’s going to be in the right place out there and keep people lined up and no moment is too big for this guy.  I am proud of how he played in critical plays throughout the season and made a bunch of them.  He’s so deserving of this award,” Giardina said.

Stephan Pierre will prepare for Spring practice as the Golden Rams try to defend their SIAC title.  With the rest of the conference in motion with a carousel of coaches entering and exiting, the SIAC will be a conference to watch in Fall of 2022.