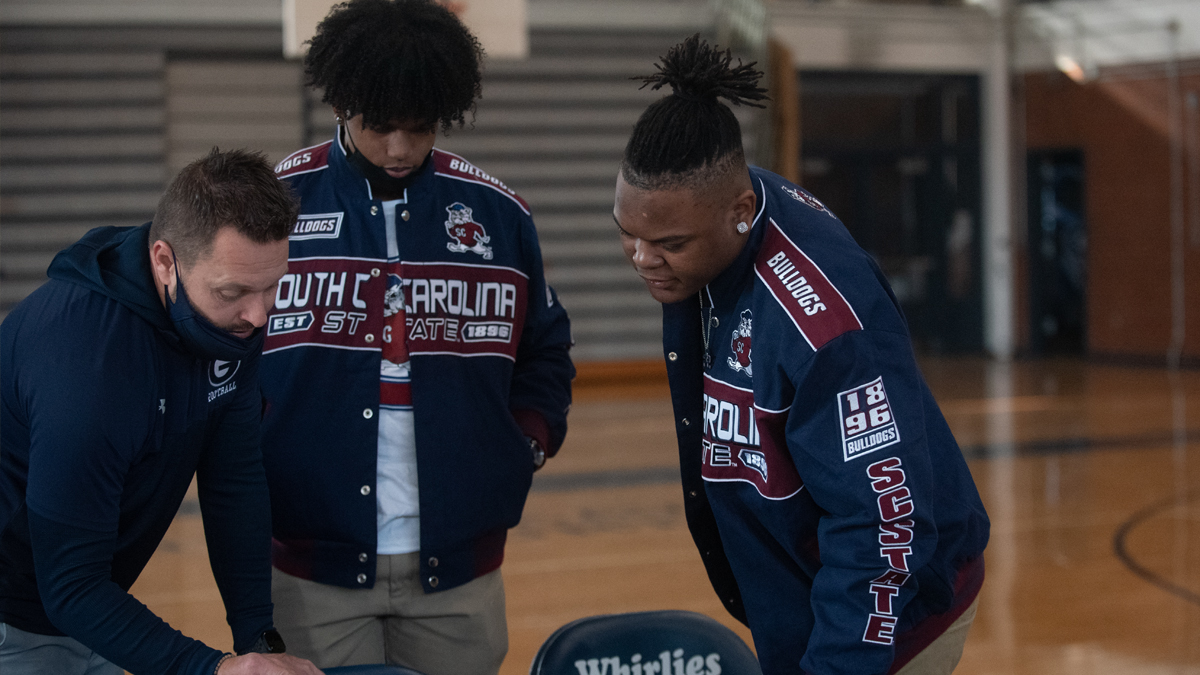 SC State may have found future HBCU to NFL diamonds

South Carolina State became a top producer of HBCU talent to the NFL by finding diamonds in the rough. It may have found two at one school in NC.

GREENSBORO, NC — Only one HBCU had two players in the Pro Bowl on Sunday. That school was South Carolina State. Both of the men representing SCSU — Philadelphia’s Javon Hargrave and Indianapolis’ Darius Leonard — are two of the diamonds in the rough that the school has produced throughout the decades of its illustrious football program.

And it might have found two more of them in Greensboro, NC.

The defending MEAC Champions and Celebration Bowl winners signed two of the top players from a loaded Grimsley High School football program on national signing day. Defensive lineman Tamorye Thompson and defensive back Jordan Watkins both signed national letters of intent to play for SCSU in front of family and friends during the spring NSD.

Thompson was the first to commit to SC State — he announced his commitment in November. He said coach Buddy Pough and his staff made him feel wanted in Orangeburg.

“He’s just been a relentless player for us the last three years,” Grimsley head coach Darryl Brown said. “He was the defensive player of the year in our conference this year. A lot of the bigger schools — some of the bigger schools — thought maybe he was a little undersized. South Carolina State did not. They thought he fit in really well with them.”

Watkins committed after Thompson. He says the two talked about playing together, but ultimately the coaching staff and atmosphere at the school left an impression on him.

“It’s unreal the feeling, the love that I received from everybody, the love I’m receiving from South Carolina State Bulldogs, — I’m ready to get to work down in Orangeburg.”

Brown says he thinks SC State potentially has a diamond in the rough with the 6’2, 195 pound Watkins.

“He’s a very versatile player, extremely physical. You know, I think the upside for him is really huge,” he said. “I think he’s still got a long ways to go. I think as good of a player as he is right now, he’s going to be even better in a couple of years,” he said. “I think South Carolina State got a steal.”

It wouldn’t be the first time for South Carolina State and Buddy Pough.

It’s a bright, sunny morning on the campus of Grimsley High School in Greensboro, NC. A crowd full of students have filed into the gymnasium to watch three of their classmates officially begin to ink the next chapter in their athletic careers and life.

Grimsley principal Ged O’Donnell and Brown beamed with pride as Thompson and Watkins signed with the HBCU while wide receiver Tyson Resper is heading for Catawba.

“The first time you saw Tomorye, we were like, ‘Man, we got to get this guy involved in our program and his first three practices with this we weren’t really sure what he could do,” Brown remembered. “And we stick him out there and he’s is kind of going to up against-guys guys and next thing, you know, he’s kind of winning every one on one matchup he had.”

Brown recalled a similar experience with Watkins as his family beamed with pride.

“Jordan Watkins showed up here a couple of years ago, wasn’t really sure where he was gonna play for us when he got here,” he said. “The two years he’s been here, he’s done a lot different things for our football program playing on the back end as a safety, and this year we kind of had him down in the box — got him down as an outside linebacker and got him more involved in the run game and a versatile player for us. He’s done a lot of great things in his short time here.”

Avis Williford said she was happy her son’s hard work was paying off and grateful for the village that helped him get this far. She vividly remembers when football chose him and he chose football.

“He said ‘ Mom. I walked in school, I was walking down a hallway and a coach tapped me on my shoulder and said, ‘We need you for our team,” she remembered vividly. “And he said, Mom, I went to the practice. I like it. I’m going to join.”

In between countless daps and hugs, Thompson talked about what it meant to be embraced on his big day.

“I’m blessed to have coaches, teammates, family, friends, everybody coming out here showing me love,” he said. “It’s an unreal real feeling considering what I’ve been through, what I came from. For me, this is an honor and I’m blessed on all measures. It feels great.”

While both players were big pieces to the puzzle at Grimsley, neither of them were considered can’t-miss prospects. That would be Travis Shaw, Grimsley’s five-star defensive tackle who had North Carolina A&T in his final four, but ultimately chose UNC. His signing day was back in December in the same gym, and it had much more media fanfare than what Thompson and Watkins received.

But those are the kinds of athletes that SC State has made a name for itself by turning into guys like Leonard (the highest paid inside linebacker in NFL history) and Hargrave from relatively unheralded recruits into some of the best players at their positions.

There’s no guarantee that either of them will become Leonard or Hargrave or any of the other NFL players SCSU has produced over the years. For now, their high school coach is happy knowing that they will be in good hands with their college coaches.

“I know both of those guys really felt at home down there,” Brown said. “Coach Blanchard, Coach Pough you made him feel really good that they were in the right spot and they love their visit down there. So I’m extremely happy for them.”

SC State may have found future HBCU to NFL diamonds

342
The Latest in HBCU Sports and Culture