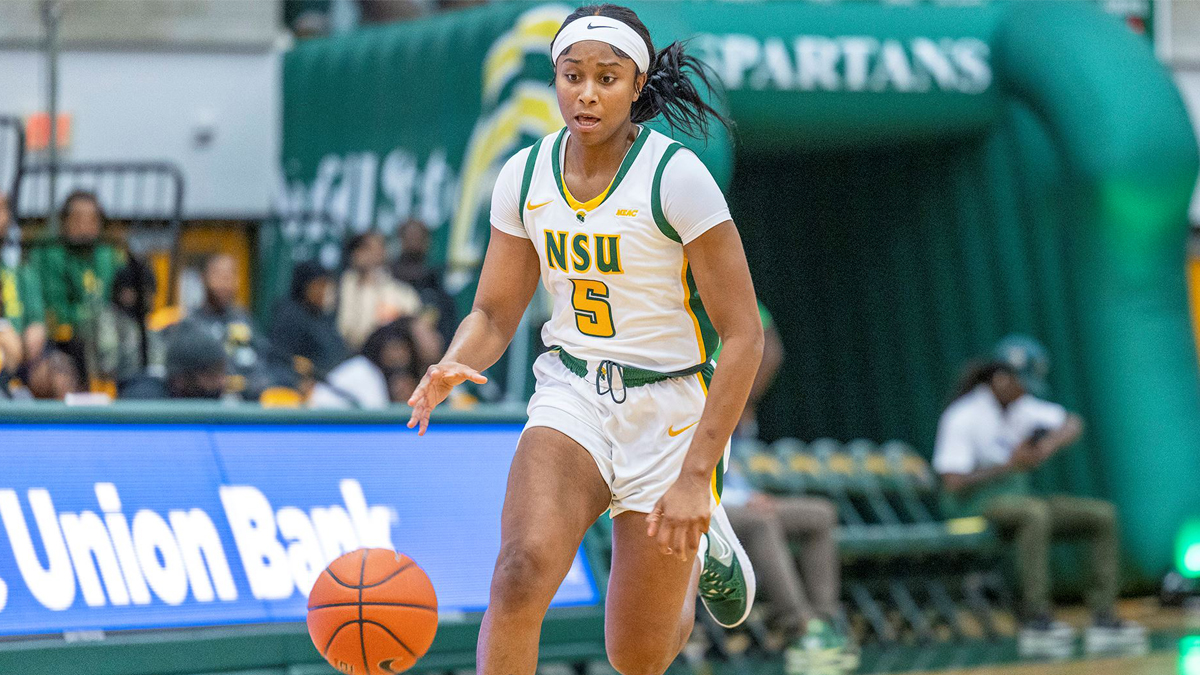 The Norfolk State women exploded for 15 3-pointers as it came up with a 66-point win over Delaware State.

Norfolk, Va. – Camille Downs made four of the record-setting 15 3-pointers for Norfolk State on Saturday as the Spartans crushed Delaware State 102-36 at Echols Hall. NSU’s 66-point win is the largest margin of victory in school history against a MEAC opponent.

The Hornets scored the game’s first four points, hitting a pair of throws and a layup. It didn’t take long for the Spartans to find their rhythm, though, scoring the next 13 points on a run that included a smooth step back 3-pointer from Janay Turner. Downs checked into the game and made her mark felt almost immediately, getting a quick steal and score.

Niya Fields, who recorded career-highs in points (15) and three-point field goals made (5) on Saturday, knocked her first deep ball of the night down to put the Spartans up six. Downs made a layup and a three soon after, giving NSU an 11-point lead at the end of the first quarter.

The Spartans received another spark off the bench in Crystal White. The 5-10 freshman recorded a steal and took it down for another fast break score early in the second quarter, and a floater a few minutes later. White set career-highs in points (13) field goals made (5), and 3-point field goals made (2) on Saturday.

With a minute and a half left in the second quarter, Deja Francis took over the rest of the period. The junior guard made two layups, and got to the line for a pair of free throws in the final minutes of the quarter. The six-point burst gave her 17 at the half, and she’d finish with 21 points, seven assists, and five steals on 56.3 percent (9 of 16) shooting.

NSU shot a supremely efficient 15 of 21 (71.4%) from the field in the second quarter, knocking down four of their seven 3-point attempts (57.1%). The Spartans also forced 24 turnovers in the first half. The strong offensive and defensive performance gave them a 60-21 lead heading into the second half.

The second half started off slow, with neither team making a basket to fall in the first two minutes. DSU’s Unique Miller ended the drought with a contested layup, and Mahoganie Williams got the second half scoring started for the Spartans the next time down the floor.

Downs continued her dominant performance in the third quarter, scoring 11 points in the period. With under seconds left on the clock, Downs got her sixth steal of the night and scored on the other end. She swiped another takeaway just 15 seconds later, sinking a 3-pointer as the buzzer sounded.

NSU head coach Larry Vickers leaned on his bench in the final quarter, with Turner and White leading the offense. Turner hit a pair of threes in the fourth period, and Fields hit her fourth and fifth of the night in the final minutes, giving the Spartans a program-high 15 made 3-pointers on the night. The previous record, 13, occurred against Virginia-Lynchburg on Nov. 14, 2019 and at South Carolina State on Jan. 8, 2005.

The aggressive NSU defense racked up 27 steals on Saturday, the most since the Spartans recorded 27 in that above-mentioned game against Virginia-Lynchburg in 2019. DSU’s 36 points was the lowest NSU has held an opponent to since the Spartans beat St. Augustine’s 53-27 on Dec. 18, 2017.

The Spartans’ 102 points is the first time they’ve scored 100 or more points since the above- mentioned game against Virginia-Lynchburg in 2019, which NSU won 123-48.

NSU will hit the road again to face Maryland Eastern Shore on Monday at 5:30 P.M. The game was rescheduled from Jan. 17.