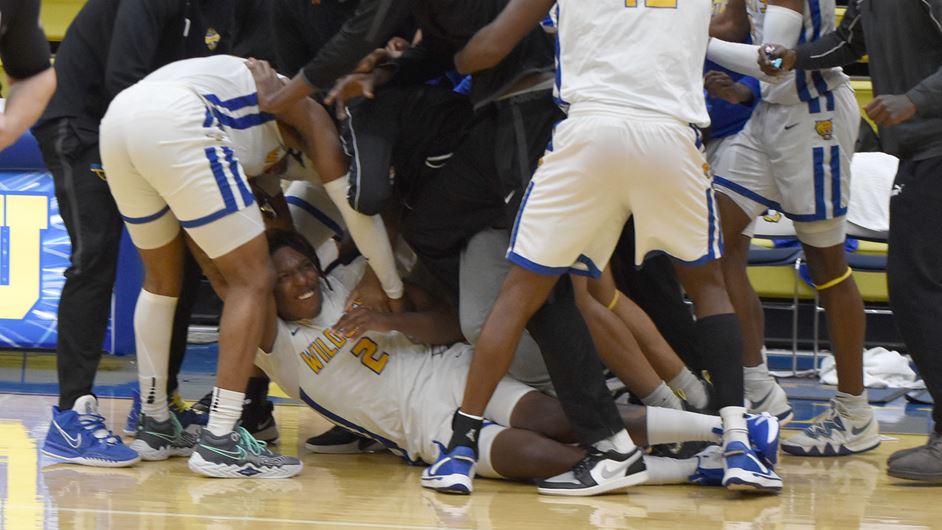 For the first time all season, Fort Valley State puts together back to back wins.

FORT VALLEY, Ga. – There’s nothing better than to be at the bottom of the pile of your teammates after you just hit the game-winner. Right in front of the Wildcats bench, K.J. Doucet drained the game-winning 3-pointer at the buzzer and gave Fort Valley State the 61-58 men’s hoops upset of the Southern Intercollegiate Athletic Conference East-leading Benedict College Monday night.

Trailing 57-54 with 2:29, it was Doucet time for the Wildcats (5-13/4-6 SIAC East). On back-to-back possessions, Doucet was fouled by the Tigers (14-5/10-2 SIAC East) and he went 4 of 4 from the charity stripe to give the home team the edge, 58-57, with 1:40 to go. Coming off an empty possession by both teams, Benedict’s Malachi McCoy was fouled following an offensive rebound and he tied the contest, 58-58, with 23 seconds. After a FVSU timeout with 19 seconds, Pierre Mitchell dished to the right wing where Doucet sank the deep trey at the buzzer for the victory.

First win streak of the season

The FVSU win gives the young club its first two-game win streak of the season and second in three days after a 73-57 win over Allen University last Saturday afternoon.

Doucet hit 7 of 13 of his attempts and 3 of 6 triples for 22 points to lead all scorers. Kenton Eskridge downed a trio of 3-pointers of his own as part of his 11-point night, while center Quincy Young made 5 of 8 tries for 10 points, seven board and a pair of blocks on the inside.

The Wildcats defense held the visitors to only 2 of 24 from 3-point range.

Benedict led the contest by eight points, 53-45, with 7:26 left. An Eskridge jumper in the lane and a Doucet trey helped FVSU score the next seven points for the tight game down the stretch.

FVSU and Benedict have the series rematch right away in Columbia, S.C. on Saturday, Feb. 5. The ball goes into the air at approximately 3 p.m.

355
The Latest in HBCU Sports and Culture