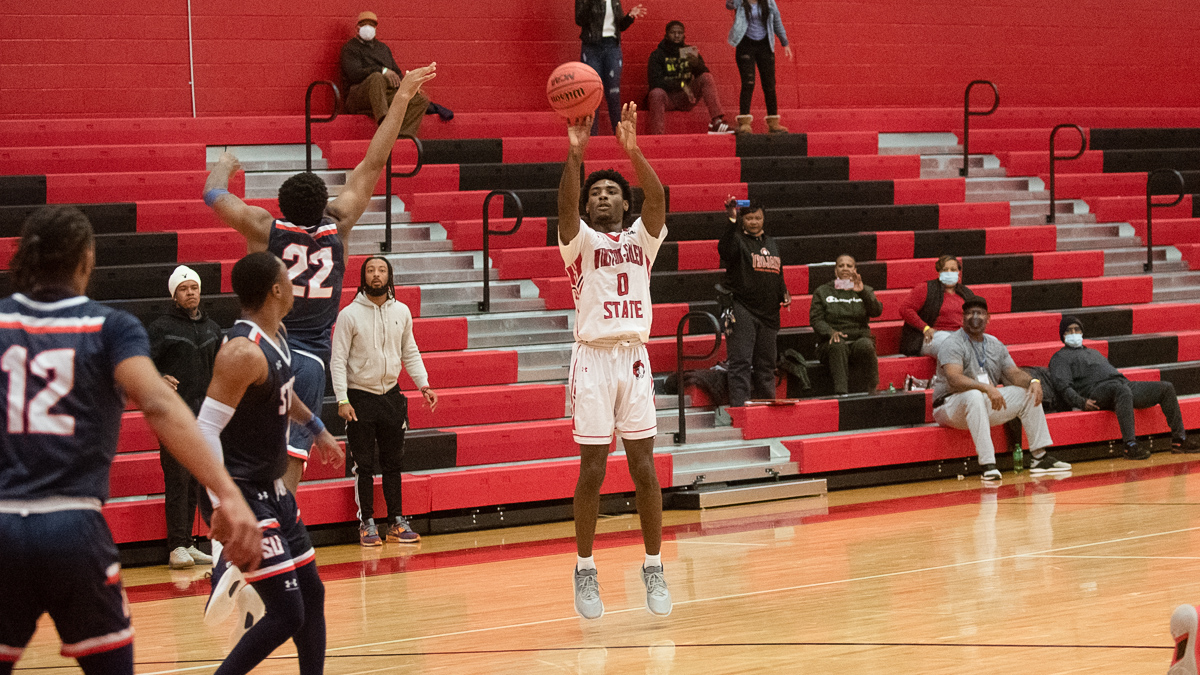 Both the WSSU women and men came away with wins over Virginia State, but in drastically different ways.

Still both the WSSU women and men came out on top against Virginia State to pick up their first wins in CIAA play.

The Lady Rams came out hot early, ending the first quarter with a 22-9 lead and leading by as many as 24 points in the first half. The Lady Trojans would close the gap to 42-24 at halftime and made some progress in the second half, but they were never able to recover from the early hole they found themselves in as the Lady Rams came away with an 81-58 win at home.

WSSU’s Amaya Tucker finished with a game-high 18 points, hitting two of five 3-point attempts to give herself 100 for her career. She was joined in double-figures by Melody Pritchard’s 15 points and Brooke Spaulding’s 10. Eleven of the 12 players who touched the floor for WSSU scored. WSSU improved to 5-4 on the season, 1-1 in the CIAA.

Natalia Leaks led the way with 15 points for VSU.

The WSSU men entered the game not only without head coach Cleo Hill Jr., it also was playing with leading scorer Javonte Cooke and veteran guard Jaylin Parker both on the sidelines.

Despite being undermanned, the Rams got off to a fast start, hitting 15 of their 29 first half shot attempts and taking a 39-31 lead into halftime.

Virginia State would find itself down double-digits for much of the second half, but used a strong second half performance from several players — most notably Terrence Hunter-Whitfield — to take a four-point lead heading into the final minute.

WSSU, already playing without its leading scorer, was without second-leading scorer Jon Hicklin who had fouled out and Cameron Campbell, who was receiving treatment from a bruise-up earlier in the night. So it had to put its faith in two first-year players — point guard Isaac Parson and shooting guard Samage Teel.

The freshmen did not disappoint. Teel hit a 3-pointer to send the game into overtime and Parson came up with big plays in the overtime to help WSSU come away with a 90-88 win — ending a seven-game losing streak to Virginia State.

Teel finished with a career and team-high 23 points, hitting 9 of 11 free throw attempts, in 35 minutes off the bench. Hicklin and Xavier Fennell finished with 17 points each and Fennell added 11 rebounds.

Hunter-Whitfield finished with a game-high 31 points, hitting 8 of 10 3-point attempts, and added 11 rebounds as well. B.J. Fitzgerald put up 20 points and Michael Melvin added 19 for VSU.

WSSU is scheduled to host Shaw in a double-header on Saturday. VSU will travel to Salisbury to take on Livingstone College on Saturday.

150
The Latest in HBCU Sports and Culture