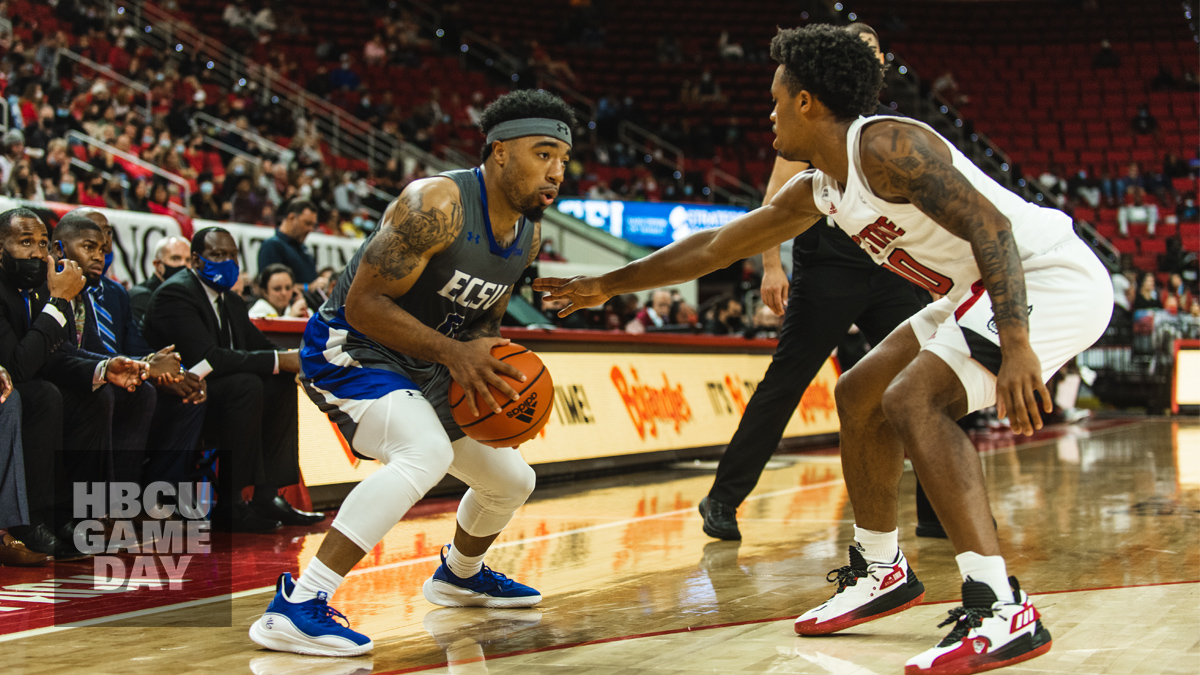 CIAA Basketball is back after the conference shut it down for 2020-2021. Here are some opening week standouts.

After more than a year-and-a-half hiatus, CIAA basketball is officially back. The Division II regular season tipped off last week and most teams hit the road for a pair of contests against regional competition. Virginia State went 2-0 while St. Aug, Bowie State and Claflin start the season 0-2. The rest of the conference split their openers.

Here are some standouts from the CIAA’s opening week.

The 2018 CIAA Rookie of The Year is no stranger to anyone who follows the league at this point. Now a grad student, he’s leading the way for ECSU as expected. After impressive showings in the exhibition season against NC State and North Carolina, he averaged 23.5 points per game this weekend in West Virginia. He scored 25 on 8-for-17 shooting in the win over Kutztown. He’s shooting 39 percent from the 3-point line so far. Hobbs got to the free throw line 16 times in the pair of games, but hit just under 69 percent.

Caleb Simmons, Shaw
Shaw basketball coach Bobby Collins has never had an issue bringing in talent, and it looks like he’s got another one in freshman Caleb Simmons. The 6’4 import from New York scored 16 points in 19 minutes in his debut, hitting 5 of 7 field goal attempts in the win. He followed that up with an even better performance in Game Two, putting up 25 points on 11-for-14 shooting against West Virginia State. He’s shooting 76.2 percent from the field after two games.

Jonathan Norfleet, Virginia State
Virginia State opened the season at home facing tough competition and managed to come out 2-0. Norfleet scored 15 points in the opener against Mansfield and then added 16 in a win against Shippensburg. Those are pretty good numbers playing in Lonnie Blow’s offense, which usually never has one single “go to guy.” BJ Fitzgerald led the way with 23 against Shippensburg as VSU looks very strong coming out the gate.

Camper made his presence felt early and often at the CIAA/PSAC Challenge. Camper looked like a man among boys in the opener against Kutztown, scoring 26 points and hitting 13 of his 16 field goal attempts to go along with 13 rebounds in the win. He followed that up with a 17-point, 11 rebound performance in a loss to Westchester. He’s hitting 75 percent of his shot attempts so far for LU.

For the last couple of years in CIAA basketball, Nevar Elmore been the defensive specialist as a part of “The Elmore Twins.” But with his brother Lydell off making a living playing basketball, Nevar showed in the first weekend he’s capable of putting in work on his own and getting the ball in the hoop. Elmore averaged 15 points  and 9.5 rebounds in LC’s two games at the Earl Lloyd Classic. His size, length and versatility make him a nightmare for CIAA and D2 teams in general.

Listed as a forward at 6’5, Jones is undersized but never outworked. He started the season with 19 and 11 against Catawba and followed it with 21 and 8 against Newberry, closing out the weekend averaging 20 and 9. Right behind him is big man Augustine Ominu, who averaged 14.5 and 10.5 in the two contests. Looks like JCSU may look to play bully ball this season.

The 2020 CIAA Championship squad at Winston-Salem State introduced us to Jon Hicklin the facilitator. Through the first two games of the 2021-22 season, we’ve seen John Hicklin the scorer. He put up 19 points in a season-opening loss to West Liberty and followed that up with 18 against Wheeling Jesuit as WSSU picked up the win. He shot 11-for-19 from the field and averaged six rebounds in the first two games. His consistent scoring hand would be a plus early in the season as WSSU integrates former Lincoln star Cam Campbell and freshmen guards Issac Parson and Samage Teel into the offense.

Fayetteville State comes into the regular season with high expectations — predicted to win the CIAA South. It went 1-1 over the weekend but it got two solid performances from Darian Dixon. The postman averaged 17 points and 6.5 rebounds per game in the opening weekend. He shot a solid 80 percent from the free throw line. He and senior Jalen Seegars are a tough one-two scoring punch to contend with.