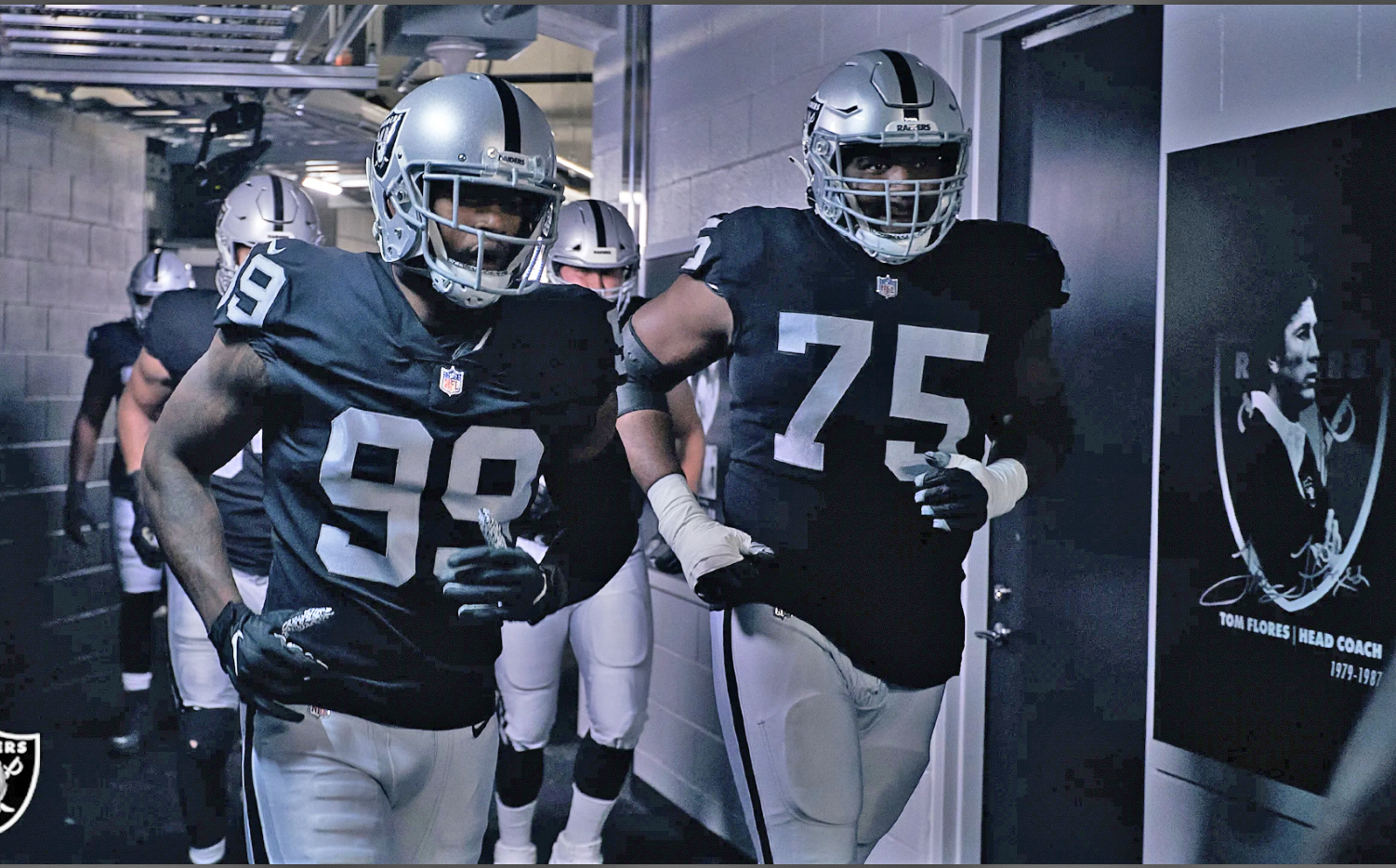 Las Vegas offensive tackle Brandon Parker (#75, NC A&T) heads out of the Raiders’ tunnel with defensive tackle Clelin Ferrell (#99) for their game Sunday vs. the Denver Broncos. Parker and the O-line played well in a 17-13 Raiders win. Check out all the HBCU NFL players in this week’s ProFile.

Indianapolis all-pro linebacker Darius “The Maniac” Leonard out of South Carolina State was ruled out just before Saturday’s game vs. Arizona. He tested positive for the virus. NFL Network Insider Ian Rapoport reported that Leonard is unvaccinated and will therefore miss 10 days — including Week 17’s game — due to his positive test. The Colts were able to come up with a 22-16 win over the Cardinals despite Leonard’s absence.

Tough sledding in the Big Easy

Among those also sitting out was veteran offensive lineman Terron Armstead (Arkansas-Pine Bluff). Armstead missed the New Orleans Saints game Monday vs. Miami with a knee injury. His absence only added to the Saints woes. They had an as many as 21 players and four coaches out with the coronovirus. By game time Monday night, there were just 36 active players and 13 practice squad players available.

The depleted squad fell 20-3 to the Dolphins.

Former first round pick Tytus Howard out of Alabama State was out for the Houston Texans game against the Los Angeles Chargers. The third-year veteran has reportedly tested positive for the COVID-19 virus for the second time this season. He spent a week on the COVID list in training camp and ended up on the reserve list again this week.

Howard was among 23 Texans’ players on the COVID list including their entire starting offense line. Despite missing that many players, Houston managed to knock off the LA Chargers, 41-29.

NC A&T’s Parker gets it done

At least one lineman with HBCU roots made it through the week.

North Carolina A&T product Brandon Parker of Las Vegas played all 69 offensive snaps in the Raiders 17-13 win at home over Denver. Parker and his offensive line cohorts paved the way for Derek Carr and the Raiders’ offense to put up 361 total yards vs. the Broncos.

It was the second straight win for Las Vegas after a 48-9 blowout loss to Kansas City two weeks ago. It also keeps alive the Raiders playoff hopes. They are now 8-7 with a key game coming up at 9-6 Indianapolis this week.

– #33 – ANTONIO HAMILTON, DB, Arizona (6th season, SOUTH CAROLINA STATE) – In 22-16 loss to the Indianapolis, Hamilton started at cornerback and was second on the team with seven total tackles, six solos and one pass defended. He played 57 defensive snaps (81%) and three snaps on special teams (12%).

– #75 BRANDON PARKER, OT, Las Vegas (4th season, NORTH CAROLINA A&T) – In the Raiders’ 17-13 win over Denver, Parker started at right offensive tackle and helped Las Vegas rush for 160 yards and one TD and pass for 201 yards and one TD while the line gave up two sacks. Parker played all 69 offensive plays (100%) and three special teams’ snaps (14%).

– #71 TYTUS HOWARD, OG, Houston (3rd season, ALABAMA STATE) – In 41-29 win over the Los Angeles Chargers, Howard did not play because he is on the reserve COVID-19 list after testing positive for the virus.

– #72 TERRON ARMSTEAD, OT, New Orleans (10th season, ARKANSAS-PINE BLUFF) – In the Saints 20-3 loss to Miami, Armstead did not play as he is out with a knee injury.

– #95 JAVON HARGRAVE, DT, Philadelphia – In 34-10 win over the New York Giants, Hargrave had two solo tackles, one hit on the quarterback and one batted down pass. Hargrave played 40 snaps on defense (53%) and one special teams’ snap (3%).

– #53 – DARIUS LEONARD, LB, Indianapolis (4th season, SOUTH CAROLINA STATE) – In 22-16 win over Arizona, Leonard was in health and safety protocols and did not play.