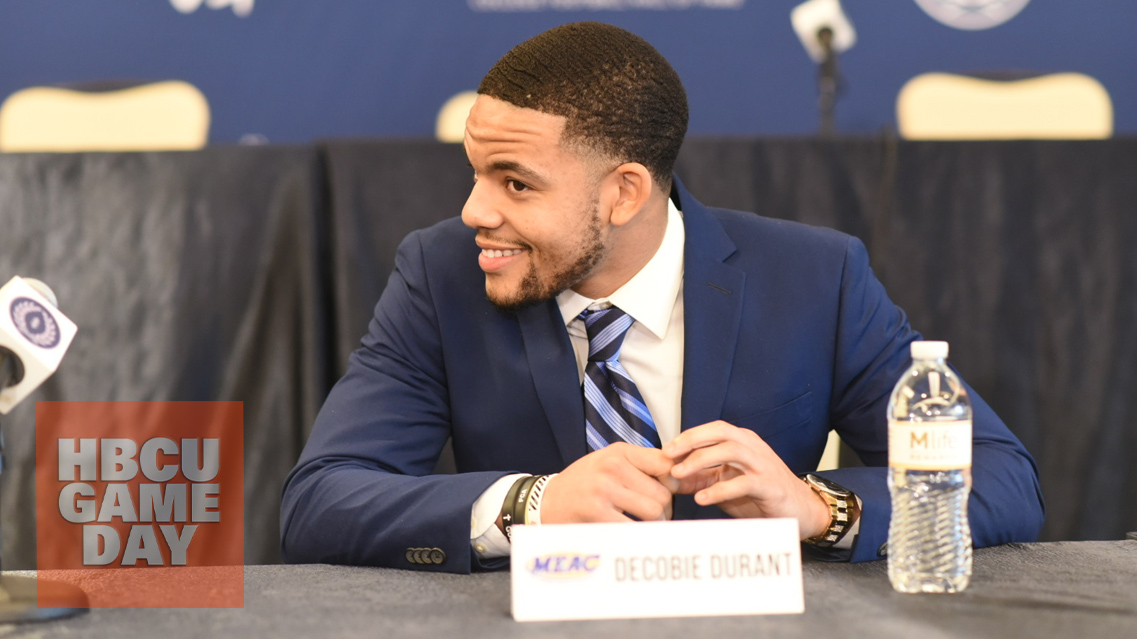 Decobie Durant is in great company as a MEAC Defensive Player of The Year. Now he’s focused on winning the Celebration Bowl.

LAS VEGAS — While the rest of Decobie Durant’s teammates were prepping for the Celebration Bowl, he had to take a little detour.

Durant had to travel to Las Vegas to recieve the MEAC Defensive Player of the Year award. He’s fully aware of the pantheon of legends from South Carolina State who have gone on to do big things after winning the award.

“Coming in, I already knew what was up,” Durant told HBCU Gameday. “They already produce a lot of great players to even go into the NFL whether they were getting drafted or going in undrafted. They always produce great NFL players, great caliber players.”

The Lamar, SC native is now in some elite company.

Pough said Durant has been a mainstay for his defense for a while now.

“He’s been kind of the unknown guy because people don’t mess with him very much,” he said with a smirk. “He’s got a reputation early in his career for being a heck of a tackler, a tough-nosed guy, a guy who would take balls away from you. A guy who created turnovers on that side. So in that case, most teams have gone away from him. So we are proud of the fact that our league recognized how good he was, even though his stats weren’t quite what they would have been if they had attacked him more.”

Durant finished the season with 37 tackles — 29 solo — and led the MEAC with 14 passes defended. He picked off three passes — two of them against Clemson.

“It was a big game for me,” Durant said. “I knew coming into the game, I was either going to make money or not make money. And now I just came in with the mindset of I can’t be stopped. So I came in, made a couple of plays, had two interceptions like three pass breakups — had a few tackles.”

It was the kind of big-time performance that helped Darius Leonard become a second round pick in the 2018 NFL Draft out of SC State. Though Clemson would go on to win the game in a blowout, Durant said he felt and the team represented well.

“Yeah, it was just a great moment playing in front of a crowd. I showed the stage wasn’t too bright for me,” he said. “I’m a humble guy, so just coming in. My teammates have my back. I had their back. It was a game for us to show that we belong.”

Now Durant and SC State (6-5) will look to make another statement when they line up against Jackson State in the Celebration Bowl on Dec. 18. He is eagerly anticipating taking on the SWAC Champs in Mercedes-Benz Stadium.

“We just gotta play hard and don’t let the stage, the bright lights get to you,” Durant said when asked about the key to the Celebration Bowl. “Just come in and play hard, play fast, play physical and don’t back down. Even though they’ve got a good fan base coming in behind. So it’s going to be great going in there and playing against them and playing against Deion (Sanders). So it’s going to be a great game.”

The Celebration Bowl appears to be headed for a record crowd, but we already know Decobie Durant isn’t afraid of the big stage and bright lights.