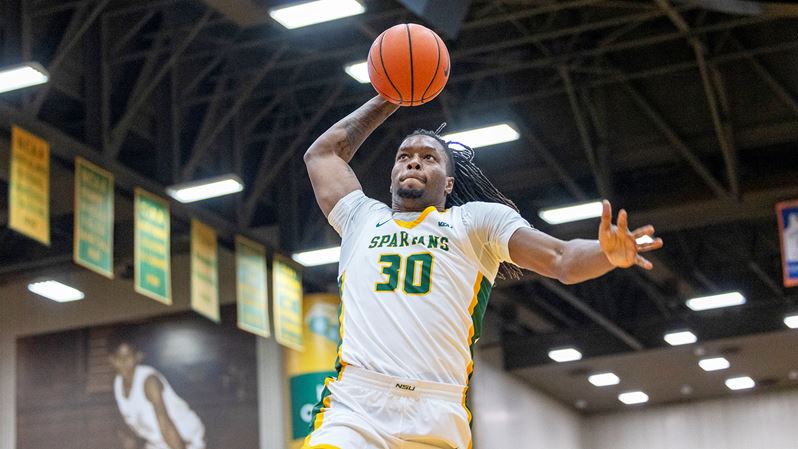 Norfolk State got a big performance from Joe Bryant Jr. and Co. to beat rival Hampton and improve to 7-1 in the Chris Paul HBCU Challenge opener.

PHOENIX, Ariz. –Joe Bryant Jr. scored 20 points and Kris Bankston had a season-high 18 as the Norfolk State men’s basketball team improved to 7-1 on the year with a 70-61 win over Hampton in the first game of the Boost Mobile HBCU Challenge hosted by Chris Paul at the Footprint Center on Sunday night.

Cahiem Brown added nine points, all in the second half, to help the Spartans rally from a six-point halftime deficit to defeat their Hampton Roads rival in an ESPN2-televised matchup.

NSU used a 13-2 spurt midway through the half to overtake the Pirates. Christian Ings had the first four points in the run, including a put-back dunk off a Bryant miss. Nyzaiah Chambers’ dunk after a feed from Brown gave NSU its first lead of the half, 44-42, at the 9:51 mark. Bryant tacked on a pair of free throws and Brown hit one to push NSU’s lead to 47-42.

The Spartans held the Pirates (2-5) without a field goal for more than six and a half minutes during the run. Hampton could only muster two DeAngelo Epps free throws during that time.

Hampton momentarily retook the lead at 50-49 on three free throws by Najee Garvin with 6:50 left in the game. But the Spartans countered with an 8-2 run, which Bankston started with a dunk and a short hook shot in the lane. Brown made a driving layup and hit two free throws to give NSU a five-point cushion.

Bryant helped seal the win by scoring nine points in the final two minutes, including hitting all seven of his free throws down the stretch.

NSU jumped out to a 16-9 lead by the second TV timeout after a triple by Tyrese Jenkins. The Pirates got back into it with long-range shooting, hitting five shots from beyond the arc in the first half to take the lead. Back-to-back treys by Russell Dean and Marquis Godwin highlighted a 17-4 HU run that helped the Pirates head into the half with a 32-26 advantage.

NSU shot 60 percent from the floor in the second half and 82 percent (14-of-17) from the free-throw line. Bryant was a perfect 12-of-12 from the charity stripe on the night, his second time this season with at least 12 made free throws without a miss. He was 16-of-16 against Tennessee State.

“We didn’t think we played the way we were supposed to in the first half. Defensively we didn’t do a very good job,” NSU head coach Robert Jones said. “We talked about that at halftime, our guys made the proper adjustments by sharing the ball and executing our plays.

“I challenged Joe at halftime and he answered the bell, played like he was supposed to play. Bankston was hindered by foul trouble, otherwise he could have had an even bigger night. But he was consistent for us while he was in there.”

Bankston was 7-of-9 from the floor and had five rebounds. Chambers led NSU with six boards. Brown posted four rebounds and three assists to go with his nine points.

Godwin and Dean scored 14 apiece for Hampton, which was held to 34 percent shooting by the Spartans.

NSU concludes its stay in the Boost Mobile HBCU Challenge hosted by Chris Paul with a 6 p.m. game Monday against Grambling. The game will be televised live on ESPNU. The challenge is the second of two hosted by Phoenix Suns guard Chris Paul.