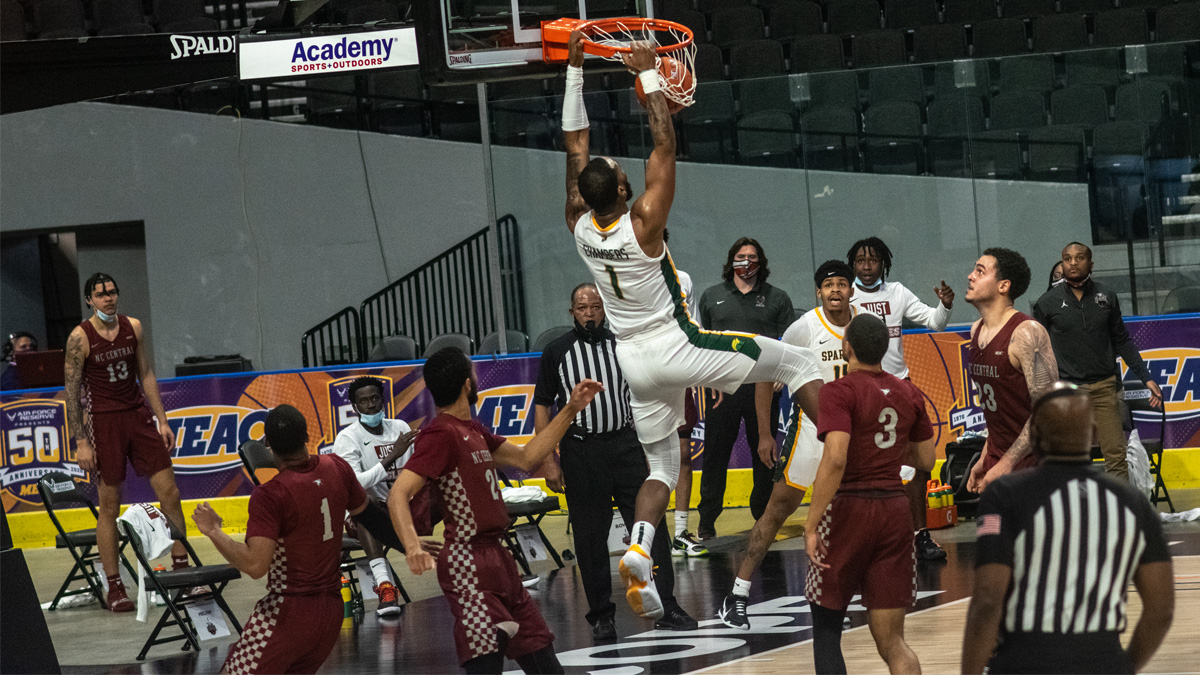 NORFOLK, Va. – The Norfolk State men’s basketball team extended its best Division I start to 6-1 on Tuesday night by holding visiting Regent University to the fewest points in school history in the Spartans’ 95-20 win at Echols Hall.

Regent University is located in Virginia Beach, VA. It was founded by Televangist Pat Robertson in 1977 and Christian Broadcasting Network University and the name was changed in 1990. Robertson is still the Chancellor of the University. It competes not in the NCAA or NAIA, but the National Christian College Athletic Association (NCCAA).

Jalen Hawkins paced NSU with 16 points, 12 in the first half. Dana Tate Jr. added a season-high 13, Joe Bryant Jr. also scored 13 and Daryl Anderson had 10 for the Spartans, who saw all 14 of their players score at least two points.

Regent was within 8-6 at the 12:42 mark of the first half after a jumper by Stanley Adjei. But the Spartans answered with a 14-0 run, fueled by eight points by Hawkins, to open up a 22-6 lead. The Royals scored just once more the rest of the half, as NSU scored 34 of the final 36 points of the stanza to take a 42-8 lead into the intermission.

Hawkins led all Spartans with 12 points in the first half. In all, nine different Spartans scored in the period. NSU held Regent to 4-of-25 shooting (16 percent) while forcing 14 Royals turnovers.

NSU’s defense continued to smother Regent in the second half, allowing just one field goal in the first 11 minutes of the period. The final margin represented NSU’s largest lead on the night, and is the biggest margin of victory for NSU is the third-largest in school history. Only a 78-point win over Mid-Atlantic Christian (112-34) on Dec. 14, 2017 was bigger in the Spartans’ Division I history.

The Spartans are on the road this weekend for the inaugural Boost Mobile HBCU Challenge hosted by Chris Paul in Phoenix. The two-day showcase begins Sunday as the Spartans take on Hampton at 8 p.m. in a game that will be televised on ESPN2. NSU then faces Grambling at 6 p.m. Monday on ESPNU. Both games will be played at the Footprint Center, home of Paul’s Phoenix Suns.

185
The Latest in HBCU Sports and Culture