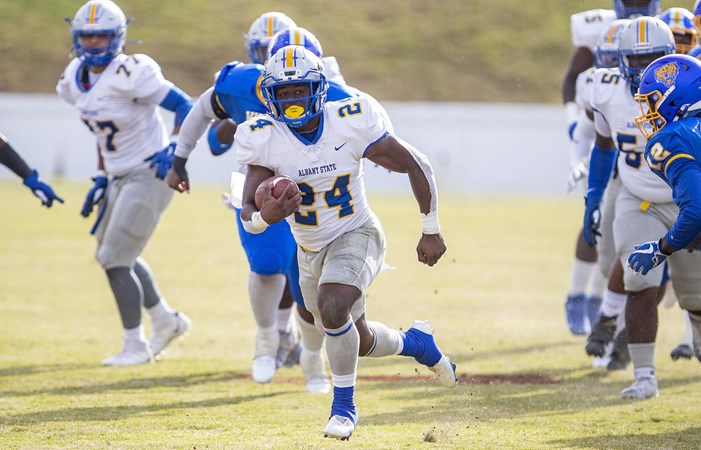 Albany State had already clinched the SIAC East title, but it didn’t let up against rival Fort Valley State.

COLUMBUS, GA  – The 31st annual Fountain City Classic was pitted as a game against arch rivals Albany State (9-1, 6-0 SIAC) and the Fort Valley State Wildcats (5-5, 2-3 SIAC).  It never materialized as a rivalry game.  The focus of the ASU Golden Rams was evident from the first kickoff and lasted throughout the game.

Coming off of one of the toughest weeks in school history, with the loss of teammate Adonis Butler, the team was laser focused on honoring him.  In the end they would score his number 57 and shut out the Wildcats.

In the fourth quarter, with ASU up 51-0, backup quarterback Jhaydon Sullivan hit a streaking Jaleel Johnsonfor a 37-yrd touchdown with 7:15 remaining.  With the score at 57-0, ASU would kneel and not pass the number of the fallen teammate.  The emotions on the ASU sideline and the recognition in the stands by ASU fans as to what had happened was a magic moment that will not be forgotten.  The ASU rushed to find Butler’s family and present them with the ball that scored the final touchdown.

ASU head coach Gabe Giardina was aware of the possibility, but was at an awkard position at halftime.  With the Golden Rams up 38-0, he was pondering how to possibly score 19 points to reach the number.  “We knew what we wanted to do to honor Adonis and I applaud our amazing coaching staff for not only keeping our players focused on this tough week, but putting a solid game plan together,” Giardina said.

Giardina was soaked with Gatorade at the conclusion fo the game as the players found a way to celebrate the victory.

With this win, Albany State will have the opportunity to avenge the championship loss to Miles College in 2019, as they will face the Golden Bears in the 2021 SIAC Championship game.