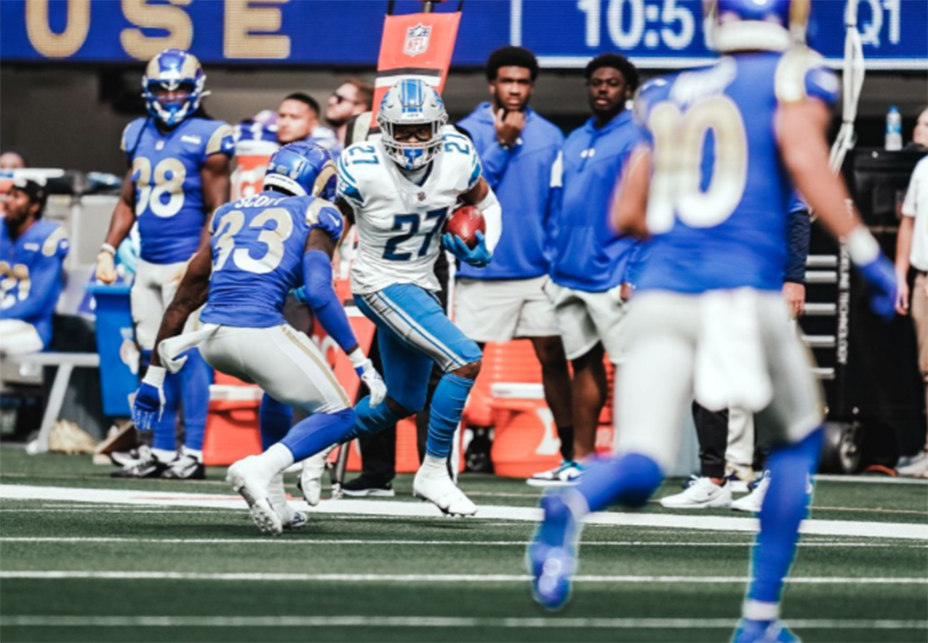 Norfolk State product Bobby Price (#27) hauled in a pass off a fake punt for the Detroit Lions in Sunday’s game vs. the LA Rams. Check out the exploits of Price and all the HBCU products below from Week 7 of the NFL season.

The South Carolina State product continues to will the Colts to wins. On Sunday, he posted seven tackles and a forced fumble as Indy beat San Francisco 31-18. The two-time all-Pro is not putting up the gaudy numbers he did in previous seasons. Still, he is the captain and unquestioned inspirational leader of the Colts’ defense.

So far this season through seven games, Leonard has 52 total tackles, tops on the Colts and 19th best in the league. He had a season’s best 12 tackles in a heartbreaking 31-25 loss in overtime to Baltimore in Week 5.

Leonard led the NFL in tackles in his rookie season of 2018 with 145. Ninety-three (93) were of the solo variety, also tops in the league. In his second season, he had 99 stops before rising above the century mark again in 2020 with 122. Leonard had 76 solos last season.

For his career, the 6-2, 230-pounder has also posted 15 sacks, none this season, and nine interceptions. He has two picks this year.

Johnson, used last year as the WFT’s primary kickoff returner, showed his defensive prowess. He came off the bench to post four solo tackles, defend one pass and force a fumble. He played more than half of the defensive snaps (34, 61%) and special teams plays (11, 58%) in the game.

Week seven of the NFL season saw the return of veteran all-Pro offensive lineman Terron Armstead of New Orleans. The Arkansas-Pine Bluff product had been out for a month after suffering an elbow injury in week three. He returned to help the Saints get a a 13-10 win over Seattle Monday night.

Of note this week was the first career start for Tennessee State product Lachavious Simmons for the Chicago Bears. Simmons was the only HBCU player taken in the 2020 NFL draft. He played 22 snaps on offense in the Bears’ 38-3 loss to Tampa Bay.

Cleveland punter Jamie Gillan, known as the ‘Scottish Hammer’ was instrumental in the Browns’ 17-14 win over Denver. He averaged 51.7 yards on three punts with a booming long punt of 65 yards. Two of his boomers landed inside the 20.

– #53 DARIUS LEONARD, LB, Indianapolis (4th season, SOUTH CAROLINA STATE) – In 31-18 win over San Francisco, Leonard had seven total tackles, two solos and five assists, one hit on the quarterback and a forced fumble. Leonard was in on all 56 defensive snaps (100%) and three special teams’ snap (11%).

– #71 TYTUS HOWARD, OG, Houston (3rd season, ALABAMA STATE) – Starting at left offensive guard in Texans’ 31-5 loss to Arizona. Howard and the offense generated 42 rushing yards and 135 passing yards and gave up two sacks. Howard was in on all 56 offensive plays (100%) and one special teams’ play (4%).

– #72 TERRON ARMSTEAD, OT, New Orleans (9th season, ARKANSAS-PINE BLUFF) – Armstead, after missing the last three games, returned as the starter at left tackle in the Saints’ 13-10 win over Seattle Monday night. New Orleans rushed for 94 yards and passed for 222 yards in the win with QB Jameis Winston sacked twice (-12 yards). He was in on all 74 offensive plays (100%) and did not play on special teams.

– #36 DANNY JOHNSON,  DB, WASHINGTON (4th season, SOUTHERN) – In 24-10 loss to Green Bay, Johnson played off the bench in the defensive backfield and had four solo tackles, forced a fumble and was credited with one pass defended. He got in on 34 plays on defense (61%) and 11 plays on special teams (58%).