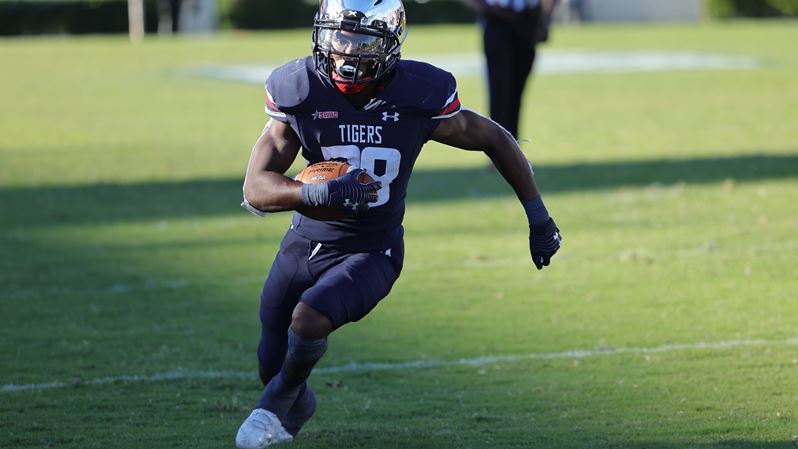 After starting the spring season as a walk-on, Jackson State running back Santee Marshall has earned a full-scholarship as his role has increased in recent games.

To say that 2021 has been eventful for Jackson State running back Santee Marshall would be an understatement.

Marshall started the year hoping to walk-on at Jackson State after starting his career at Miles College.

This weekend, after helping Jackson State pull off a homecoming victory in front of a record crowd, he made an announcement.

“I am truly honored and blessed to be apart of this @GoJSUTigersFB team!,” Marshall tweeted. “I came to this program with nothing but high faith in myself and God. I am now on FULL SCHOLARSHIP!! I thank God for my journey, my parents, my team/bruddas, the fans, and @DeionSanders for believing in me🙏🏾.”

The New Orleans native started off as a videographer for the team early during the spring season before earning a shot to play against Alabama A&M. He exploded for 133 yards in that game, stepping into the spotlight for the first time.

Despite that big effort, he still had his work cut out for him this fall. After not getting much run in the season’s first few games, he’s become a featured back the last two games. He rushed for 122 yards and two scores against Alabama A&M and followed that up with 96 yards and a score on Saturday against Alabama State.

“It’s just a blessing to be able to produce for this team and Coach Prime. I’m glad to be here and I just want to keep producing and keep getting better.”

Deion Sanders had nothing but praise for his back.

“His commitment to excellence and his consistency rewarded him a scholarship,” Sanders said. “Not me. He did that, and he’s a model to any walk-on in the country of his resilience and I love him to life.”