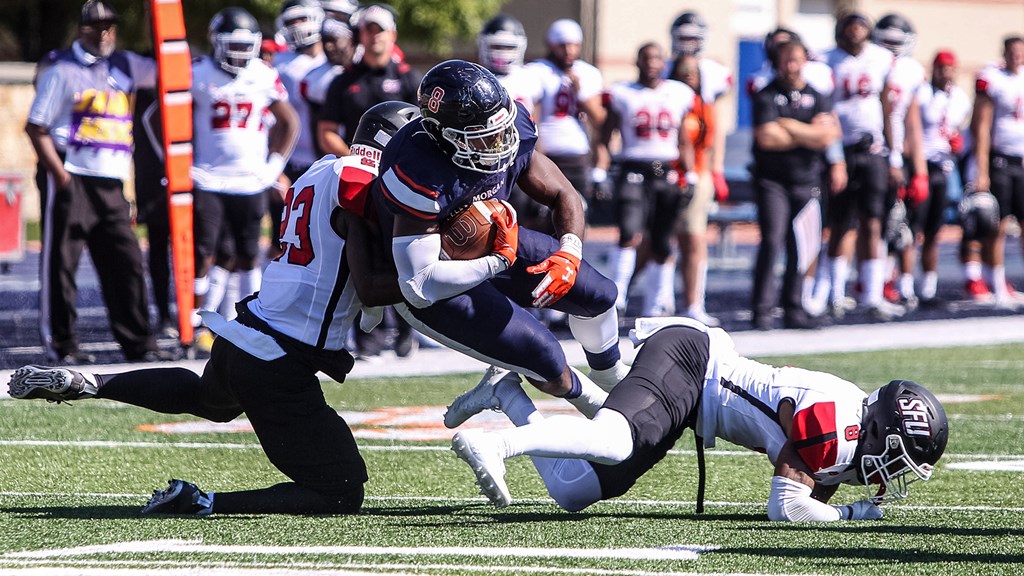 Morgan State and Howard are set to kick off conference action in the Mid-Eastern Athletic Conference (MEAC) than under Friday Night Lights.

Morgan State and Howard are set to kick off conference action in the Mid-Eastern Athletic Conference (MEAC) than under Friday Night Lights.

Much like the television series, Friday’s battle between the Howard Bison and the Morgan State Bears will also be televised – live on ESPNU at 8 p.m. It will be Howard’s first on-campus night game in more than two decades, with the Bison coming off their first victory of the season and Morgan State still in search of that elusive win. According to Bison head coach Larry Scott, this first MEAC football game of 2021 already has the flair of a football classic.

“It’s Friday Night Lights. All of us fell in love with football on Friday nights, high school football,” Scott said. “It’s special that way, to have the lights on here on campus and give our students a Friday night environment of a football game. With Morgan being right down the road, its set up to be a pretty electric classic-type atmosphere without it being a classic. Everybody’s going to be pretty pumped up. I’m sure the fans will be into it. It’s going to be a pretty electric evening for us here in the Mecca.”

Here’s a glimpse of all the games on tap for MEAC teams this weekend:

Howard Bison (1-4, 0-0 MEAC) vs. Morgan State Bears (0-4, 0-0 MEAC)
Friday, Oct. 8 • Greene Stadium • Washington, D.C. • 8 p.m.
TV: ESPNU • Live Stats
Friday’s Howard-Morgan State football game looms as a battle between one team which secured its first win of the season last Saturday (Howard) and another which is still trying to put the pieces together to win its first contest of the season (Morgan State). On his team pulling out a 22-17 win over Sacred Heart at Greene Stadium last weekend, his first as head coach of the Bison, Scott said, “It felt good to have some positive things happen. All the things we’ve been talking about with the kids, staying consistent and staying in the fight and keep swinging and battling, paid off.  It came at a really good time for us.” On his team still trying to notch its first victory, Morgan State head coach Tyrone Wheatley said, “We’re knocking, but at some point we’re going to have to just battle-ram this thing on in here. For a young team, all I ask for is just improvement every week and each week we improve in all categories except for the W.  One thing I can say is that this team has resolve. They continue fighting. We’re knocking, but they don’t answer, so we’ve just got to kick the door in.”

Delaware State Hornets (2-3, 0-0 MEAC) vs. Virginia University of Lynchburg Dragons (0-5)
Saturday, Oct. 9 • Alumni Stadium • Dover, Del. • 2 p.m.
TV: MEAC Digital Network on ESPN+ • Live Stats
At halftime of last Saturday’s double-overtime win at Wagner, Hornets head coach Rod Milstead made what he called an uncensored halftime speech, a speech directed at both his coaches and players. He preached that although his team hadn’t been in that situation and may have felt uncomfortable, “great teams find a way to be comfortable in uncomfortable situations.” The speech apparently worked, as the Hornets went on to win 33-27. Now, against 0-5 Virginia University of Lynchburg at home in Dover this weekend, Milstead cautioned, “Lynchburg has been struggling their first four or five games. That’s a team that scares me the most, the team that has not won a game. Wagner had not won a game, but they played their best football game. Those teams always concern me because I don’t want our guys to play down and lay an egg. We’ve got a lot of work to do. We have a standard here at Delaware State on how we do things. Regardless of who we play, we’ve got to play up to the standard.”

After back-to-back disappointing road losses to North Carolina A&T State and Mississippi Valley State, Eagles head coach Trei Oliver hopes his Eagles can quickly overcome the barrage of injuries which have plagued the team and find a way to get back in the win column. In fact, last week at Mississippi Valley State, 29 Eagles didn’t play due to injuries and 14 are done for the season. But as Tennessee Tech invades O’Kelly-Riddick Stadium this weekend, Oliver said his squad just has to regroup. He noted, “Up front, we have to get better and it’s about guys doing their jobs. You don’t have to make every play. Just do your job and make the plays as they come to you. We try to do too much at times.”  On Tennessee Tech, he added, “We can’t look at their record. They’re going to come in here hungry. Obviously, we’ve shown a weakness on film and they’re going to try to attack us.”

South Carolina State Bulldogs (1-3, 0-0 MEAC) vs. Florida A&M Rattlers (2-2, 1-1 SWAC)
Saturday, Oct. 9 • Bragg Memorial Stadium • Tallahassee, Fla. • 6 p.m.
TV: Facebook Live • Live Stats
The last time South Carolina State and Florida A&M played, the scene was Orangeburg, S.C. in 2019 as the Bulldog faithful were celebrating head coach Buddy Pough having become the school’s all-time winningest coach. The Rattlers put a damper on the celebration by defeating the Bulldogs in the final two minutes of the contest. To defeat FAMU this time around, Pough said his team can’t afford to play as it did in the fourth quarter of their win over Bethune-Cookman last week. He noted, “We’ve won one in a row now and we’re trying to get ready for Florida A&M this weekend down in Tallahassee. First of all, we’re going to work on not giving up 28 points in the fourth quarter. It’ll be a usual South Carolina State versus FAMU kind of game. Coach (Willie Simmons) has got a dynamic offensive attack going with one of the most prolific receiving groups in the whole country. Defensively, they’ve got about five transfer grad students on their defensive side of the ball who have size and speed. It’ll be a tough game for us. We’ve got to get ourselves ready to play.”