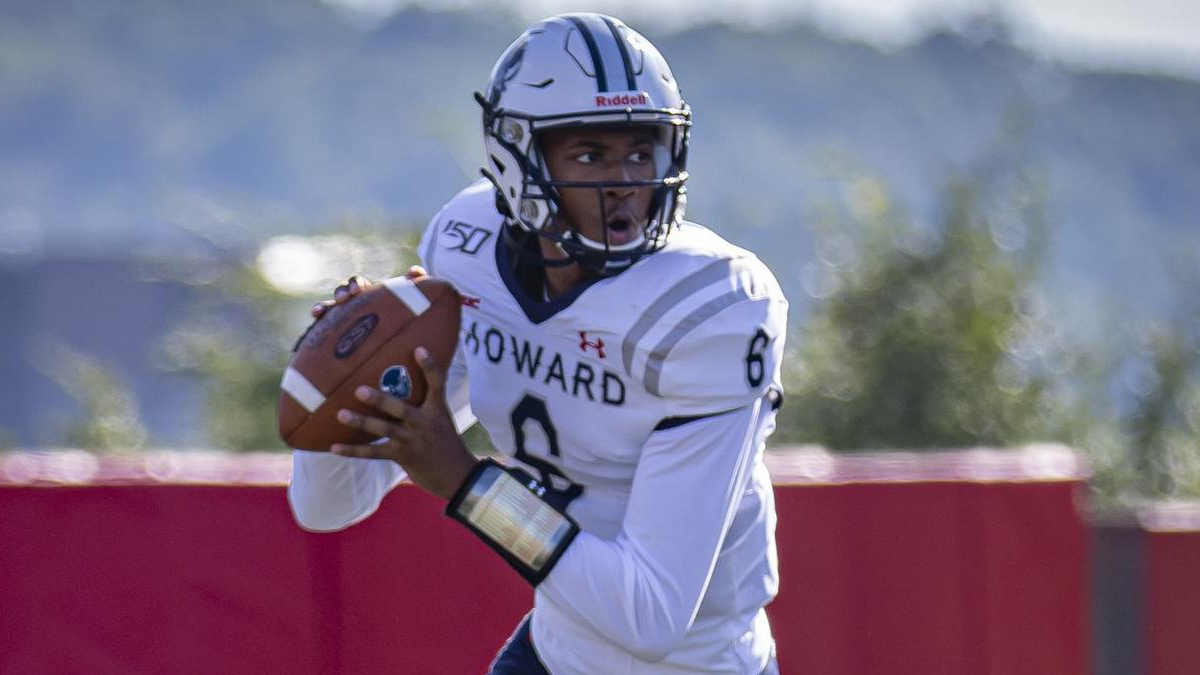 Howard University got a big game from quarterback Quinton Williams to beat Sacred Heart at home.

WASHINGTON (October 2, 2021) – Third-year quarterback Quinton Williams (Upper Marlboro, Md.) threw for three touchdowns–including the game winner–and the defense turned in its best performance of the season as the Howard University football team came from behind to defeat Sacred Heart University, 22-17, in a nonconference game before 5,235 at William H. Greene Stadium.

Howard opened the game with a nice drive of 62 yards. But the offense stalled and had to settle for a 21-yard field goal from senior kicker Faraji Woodson (Greensboro, N.C.).

Scared Heart responded with a seven-play, 66-yard drive that was capped off with seven-yard spurt by Marquez McCray to give the visitors a 7-3 lead at the 10:06 mark of the first quarter.

After the Bison sputtered on their next possession, the Pioneers capitalized with an 83-yard drive that took only seven plays and less than three minutes, making it a 14-3 lead with 4:01 on the clock in the first quarter.

The Pioneers threatened to put the game out of reach and were driving toward yet another score, but the Bison defense forced a Ricky Lancaster 37-yard field goal.

That is when the tide began to turn things around for Williams, who was 14-of-28 for 208 yards, engineered a drive of 67 yards that took 12 plays. He connected with senior wideout Matthew McDonald (Owings Mills, Md.) from 18 yards to get his team closer at 17-9 following a missed PAT. McDonald finished the afternoon with five receptions for 80 yards and a pair of touchdowns.

The defense then made the stops when they needed and got the ball back for Williams and Company.

He finally got some rhythm early in the fourth quarter, taking his team 88 yards in eight plays on a hookup with McDonald from 29 yards. The play was one of the best of the season for the offense. The throw was in the right spot at the right time and McDonald out fought the defender for the ball.

From there, the two teams took turns, having drives stopped. A big stand by the Bison, forced a Sacred Heart 35-yard field goal attempt that sailed wide right, much to the delight of the Bison faithful, which served as the 12th man in Howard’s first home game.

Howard took over with a little less than four minutes left in regulation and Williams made good on the opportunity, driving his team 70 yards in six plays, taking 1:51 off the clock. Williams again made a spectacular throw to second-year wide receiver Kasey Hawthorne (Sebring, Fla.) from 38 yards in the right corner of the end zone. Hawthorne made a spectacular play as he outfought his defender to give his team a 22-17 lead with 2:05 on the clock.

The Pioneers were able to march 57 yards down to the Bison 21. With no timeouts, the Howard defense stood tall and did not allow Sacred Heart to get any closer as the clock ran out.

“We talked all week about this being a four-quarter game,” said Howard head coach Larry Scott, who earned his first victory with the Bison. “We had to grind it out. We have been competing but have not been able to close out games. The defense played well, the offense capitalized when they had to, and the special teams all contributed to this team victory.”

In addition to his passing success, Williams was able to make some timely plays with 35 yards on the ground.

“We talked about taking it one play at time,” said the junior, who has thrown for almost 900 yards and six TDs in the past three games. “The receivers did a great job making clutch catches. We talked all week about winning the battle of 50-50 balls. We have been close, but today we were able to put together a complete effort.”

The Bison have a short turnaround. They face the MEAC rival Morgan State Bears Friday (Oct. 8) in a nationally televised game at 8 p.m. on ESPNU.

“Of course, we are excited about this first win,” said Scott. “It’s a great way to open conference play. But we have to continue to improve on today’s performance if we want to come away with a conference win.”

GAME NOTES: Freshman Dylan West (Akron, Ohio) averaged almost 40 yards per punt with a  62-yard effort…sophomore Jarett Hunter (Mineral, Va.) led his team in rushing with 85 yards on 15 carries…junior Darrian Brokenburr (Manassas, Va.) had a standout game with 7.5 tackles, 2.5 for sacks…the Bison have no takeways in five games…Friday’s game will be only the second night home game in Howard history…Howard Hall of Fame quarterback Jay Walker will handle the color commentary for the broadcast and Tiffany Greene will do play by play.