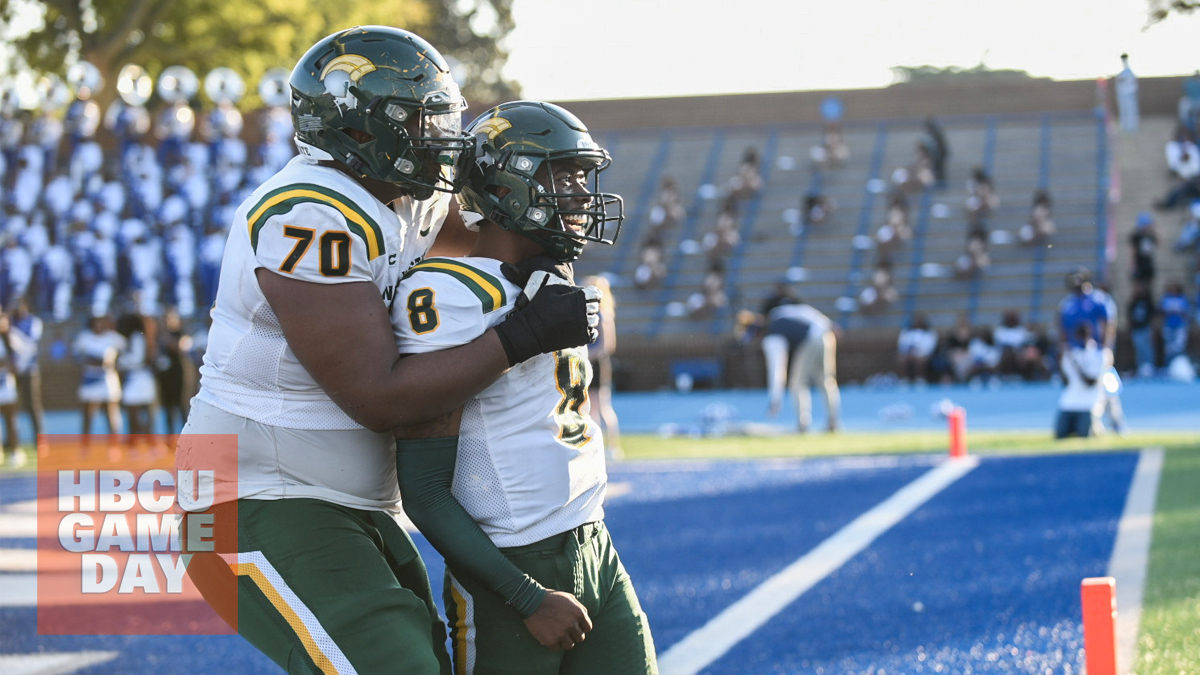 Norfolk State edges Hampton in OT Battle of The Bay

Pootie Carter came up big for Norfolk State as it got the better of Hampton University in the first football Battle of The Bay game in four years.

It took a while to get warmed up, but the Battle of The Bay lived up to its name Saturday afternoon as Norfolk State and Hampton renewed their rivalry.

The game went down to the wire and into overtime before Norfolk State put the nail in the coffin with a one-yard quarterback sneak from Juwan “Pootie” Carter. Norfolk won the game 47-44 to pick up its third-straight win on the season.

Carter had a banner day, putting NSU on his back with five total touchdowns, including three on the ground. Carter compiled 396 of his team’s 496 total yards of offense as his team continued to fight despite being down double-digit more than once.

“We came and did what we had to do. We fought through adversity, we was down at halftime, we just had to bounce back and execute,” Carter said after the game. “It ain’t nothing to it. Play football.”

Hampton looked good early, getting off to a 10-0 lead in the first quarter before NSU got on the board with a 15 yard run by Carter to cut the lead to 10-7. The teams traded scores over the next couple of minutes, with NSU tying the game at 17 with 3:52 remaining in the second quarter. Hampton finished the half strong, though, as Jett Duffey connected with Jadakis Barnes for a 49 yard score and an Axel Perez field goal gave HU a 27-17 halftime lead.

The third quarter belonged to the Spartans. He threw a six-yard pass to Marcque Ellington to cut into the lead and then ran for an 18-yard score to give the Spartans a 31-27 lead — its first of the afternoon.

Hampton would re-take a 38-34 lead after a short run by Elijah Buris. But NSU struck right back ass Carter found Justin Smith for a 70 yard bomb that gave NSU the three-point lead. It would stretch it to seven with a Josh Nardone field goal with 8:14 remaining.

The Pirates looked dead in the water with time running down, but a missed field goal by Nardone gave them new life. They put together an eight-play, 70 yard drive that culminated in Duffey finding Bonds for a 17 yard, over-the-shoulder grab and the extra point tied the game with 12 second left in regulation.

Hampton got the ball back first in overtime, but could only muster a field goal. Carter and NSU wasted little time getting down the field in the extra session as he found Smith for a 22 yard play that put NSU inn scoring position, setting up Carter’s dive over the middle to end the game.

Justin Smith finished with 144 yards on five catches. The yardage was a career-high, as was Carter’s 92 rushing yards.

Duffey threw for 370 yards and four touchdowns for Hampton, but he was also picked off three times. Bonds finished with six catches for 155 yards and two scores.

Norfolk State edges Hampton in OT Battle of The Bay