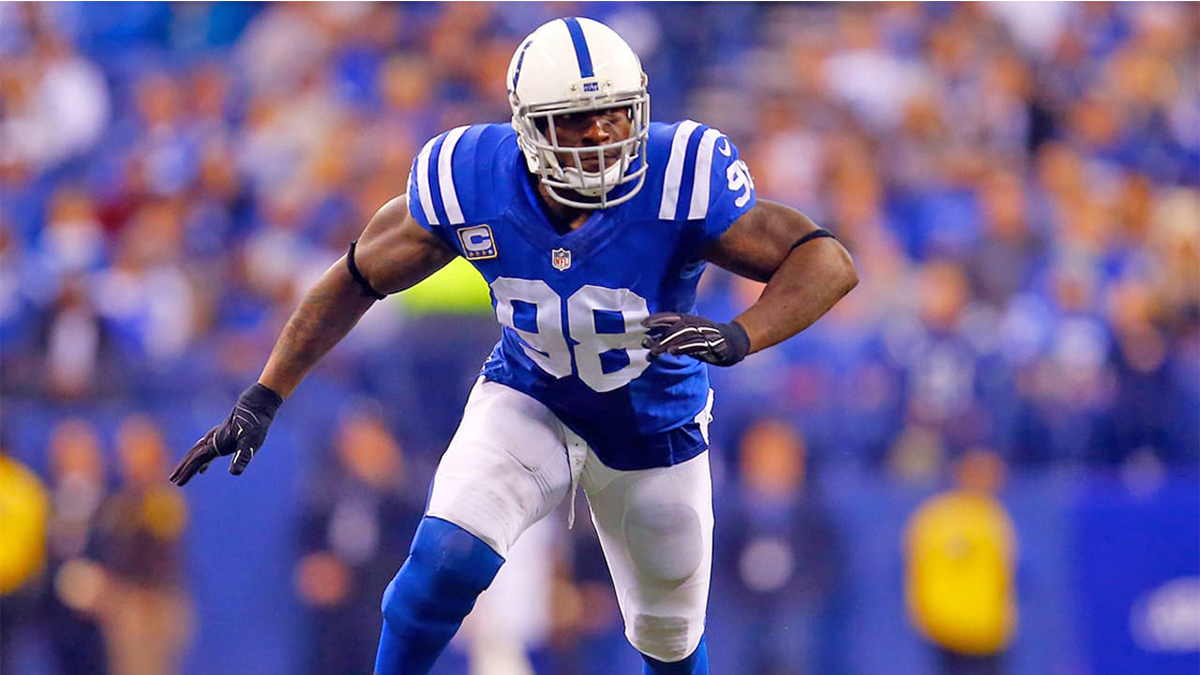 A pass-rushing and sack specialist at Alabama A&M and in the NFL, Robert Mathis is a first-time nominee for the Pro Football Hall of Fame. He joins seven other outstanding HBCU products among 122 nominees.

Robert Mathis carved out a great 14-year NFL career with the Indianapolis Colts after starring in the SWAC at Alabama A&M. Mathis had his named added Wednesday to Modern Era nominees to the Pro Football Hall of Fame in Canton, Ohio.

Mathis is one of ten first-time nominees of 122 former players to be voted on for membership in the Pro Football Hall of Fame Class of 2022. He retired in 2016. Any player who last played in 2016 is eligible for the first time in 2022.

Among the ten first-timers along with Mathis are Anquan Boldin, Steve Smith and Andre Johnson on offense and Vince Wilfork and DeMarcus Ware on defense.

Each has a strong case for induction but the competition is equally strong. None of the other seven HBCU nominees were finalists for the class of 2021.

Robert Mathis came into the NFL after a dominating career at Alabama A&M. He used a quick first step and relentless motor to blow past lineman and wreak havoc in backfields. He set the NCAA I-AA (now FCS) single season record for sacks in a season with 20 and was voted the SWAC’s defensive player of the year in his senior season.

Thought to be undersized at 6-2, 228 pounds to play a pass-rushing role in the NFL, he nevertheless was drafted in the fifth round by the Colts in 2003. He went on to establish himself as one of the premier pass rushers in league history. He posted 123 career sacks, 17th in league history, and owns the NFL record for strip sacks with 47. Mathis forced 52 fumbles overall. He recorded double-digit sacks in five seasons with a league- and career-high of 19.5 in 2013.

Playing on the left side opposite Dwight Feeney, a first round pick of the Colts in 2002, Mathis teamed with the Syracuse product to form a devastating pass-rushing tandem. Between them they totalled just under 250 combined sacks. Feeney played 16 seasons, 11 with the Colts, and finished his career with 125.5 sacks but has not been nominated to the Hall.

Mathis was voted to the Pro Bowl five times and was a first team All-Pro in 2013. He and Feeney helped the Colts win Super Bowl XLI following the 2006 season.

The path to Canton

Also among the nominees is current Tennessee State head coach Eddie George, the former Heisman Trophy winning running back from Ohio State, who had seven 1,000-yard rushing seasons and scored 78 touchdowns in a nine-year NFL career with Houston/Tennessee. George has been eligible since 2010. George and McNair played together for eight years in the Oilers/Titans backfield.

The list of Modern-Era Nominees will be reduced to 25 semifinalists in November and, from there, to 15 finalists in January.

Mathis, Williams and McNair are already in the Black College Football Hall of Fame, the shrine honoring greats from the HBCU ranks that will take up residence in a new wing in Canton upon its completion. The other five are sure to join them there soon.