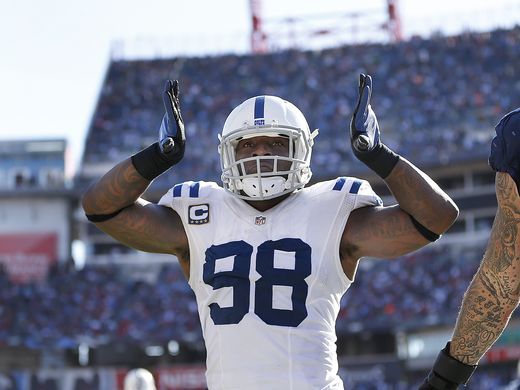 Is Robert Mathis the tail of the HBCU-to-Pro Football Hall of Fame line?

On December 30, 2016, Indianapolis Colts defensive End/outside Linebacker Robert Mathis announced his retirement from the NFL. In that same game, Mathis recorded his 123rd sack putting him at 17th all-time in career sacks. He also extended his record of strip-sacks with 47.

Mathis, an Alabama A&M graduate was one of the most dominant pass rushers in NCAA history. He was a four-year starter for the Bulldogs, and he set a NCAA record with 20 sacks during his senior season.

Looking at Mathis’ career, it is fair to predict that he will be wearing a gold jacket one day and he will have his bust in Canton. Mathis was one of the most dominant pass rushers to ever play in the NFL. In addition to his sack totals, Mathis registered 54 forced fumbles and 527 tackles. He was a six-time Pro Bowler, was the AFC Defensive Player of the Year in 2013 and is a Super Bowl champion.

Now the question here is, who is next? Or will there be another Hall of Fame athlete from an HBCU? Currently, there are 53 NFL players from HBCUs. That is less than two percent of the NFL. Out of the 53, the only Pro Bowlers are Antoine Bethea (Howard) with three, Dominique Rodgers-Cromartie (Tennessee State) with two and Terron Armstead (UAPB) with one.

Now on the bright side, some young HBCU athletes are making a name for themselves in the NFL. Isaiah Crowell (Alabama State) is the starting running back for the Cleveland Browns. Armstead is the starting left tackle for the New Orleans Saints. Rodney Gunter (Delaware State) started 11 games his rookie year for the Arizona Cardinals. Marquette King (Fort Valley State) has established himself as one of the best punters in the NFL, Ryan Smith (NCCU) is showing promise in Buccaneers camp, and Javon Hargrave (South Carolina State) started 13 games for the Pittsburgh Steelers, and he capped off his rookie year by sacking Tom Brady.

The future looks bright though as the 2017 draft and free agent class of HBCU athletes have potential to take the league by storm. Chad Williams, Tarik Cohen, William Stanback, Grover Stewart and Lenard Tillery each will have an opportunity to make an impact for their teams.

There are 29 NFL Hall of Famers that attended HBCUs. Names like Jerry Rice, Shannon Sharpe, Art Shell and Walter Payton made a name for themselves in the NFL. However, those players have already written their names in the history books. It is time for the current HBCU athletes in the NFL to leave their mark as well.

The question is, who will follow in their footsteps.