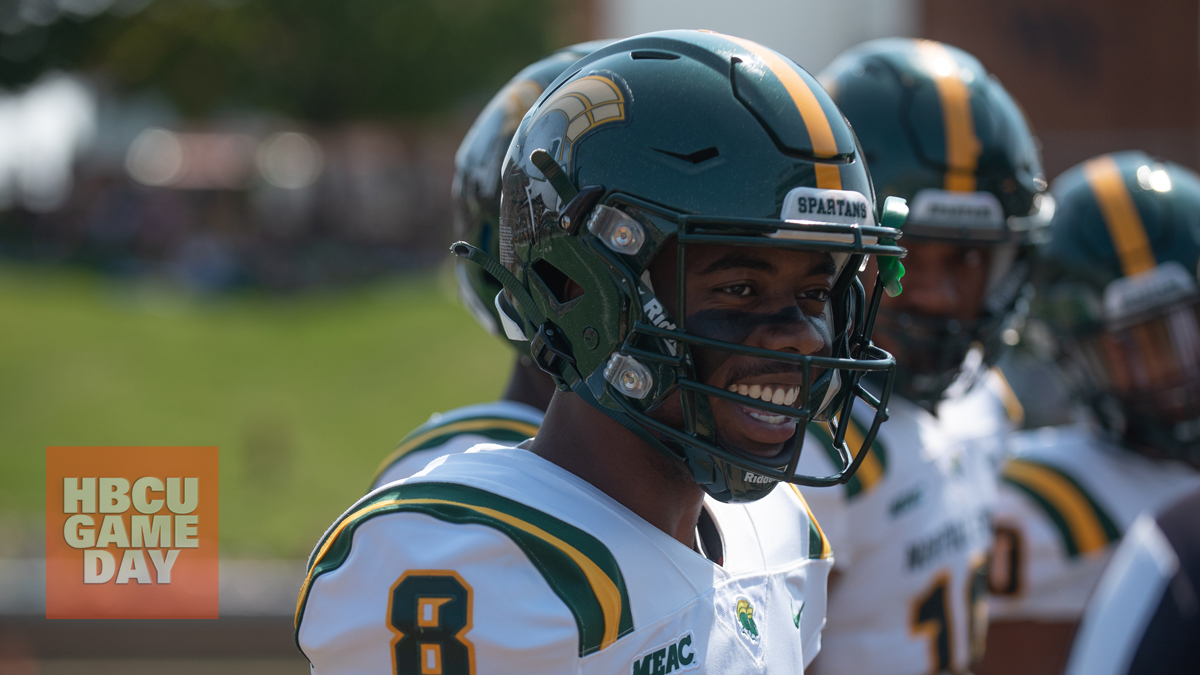 After starting the season with back-to-back FBS Money Games, Norfolk State held one of its own, breaking multiple school records while beating Elizabeth City State.

In Norfolk State’s first home game in nearly two years, and the first home contest for new head coach Dawson Odums, Carter completed 23 of 30 passes for 353 yards and five touchdowns to tie the school’s Division I single-game record for TD throws. The 675 yards of total offense NSU amassed are a new school record, and the 63 points are also a school Division I-era record.

The Spartan pass rush also came up strong, sacking ECSU quarterbacks eight times (tied the most in the D-I era) and holding the Vikings to negative-49 yards rushing, the fewest in a game by a Spartan opponent all time.

Carter connected with Justin Smith for 55 yards on the first play from scrimmage to set the stage for the rest of the game. Two plays later, Kevin Johnson scored on a 2-yard run.

Carter threw TD passes of 19 yards to Smith and 18 yards to Marcque Ellington later in the quarter as Norfolk State opened up a 21-0 lead. Both Smith and Ellington caught two TD passes from Carter on the night, with Smith (team-high five catches, 118 receiving yards) eclipsing the 100-yard mark in the first quarter.

Running back J.J. Davis got into the scoring act with a 1-yard TD run early in the second quarter, his first of two on the night. He added a 72-yard TD run in the third quarter and finished with a team-high 121 rushing yards on eight carries.

Carter capped a 35-point first half for the Spartans with a 32-yard TD pass to Da’Kendall James nine seconds before the intermission. The only thing keeping the Spartans from a bigger tally Saturday was five lost fumbles, four of which came in the first half.

Ellington hauled in a 16-yard TD catch and Smith scored on a 13-yarder in the third quarter. Davis ripped off his long touchdown run in NSU’s first play from scrimmage in the fourth quarter, bursting through the right side of the offensive line untouched.

Lex Henry accounted for NSU’s final touchdown of the night with a 19-yard TD run midway through the fourth quarter, the first TD of his career. He was one of seven Spartan running backs to log carries Saturday. As a team, NSU ran for 322 yards on 42 attempts, a 7.7-yard average.

Carter’s five touchdown passes tied Maurice Selby for most in a Division I game in school history. Selby accomplished the feat in 1998 vs. Morgan State. Carter had thrown four TD passes in a game three times previously.

The 63 points surpassed NSU’s 61 scored in a four-OT loss to Bethune-Cookman in 2005 as the most points NSU has scored in its history as a Division I program.

Defensive ends Chris Myers and Sage Beuchert-Irvine both recorded two sacks of NSU’s eight total. The Spartans tallied 13 tackles for loss with 13 players having at least half of a TFL.

Kevin Caldwell threw for 339 yards and four touchdowns for the Vikings (0-3), three in the fourth quarter alone.

NSU returns to the road for another non-conference tilt next Saturday, a 12 noon kickoff at St. Francis (Pa.)