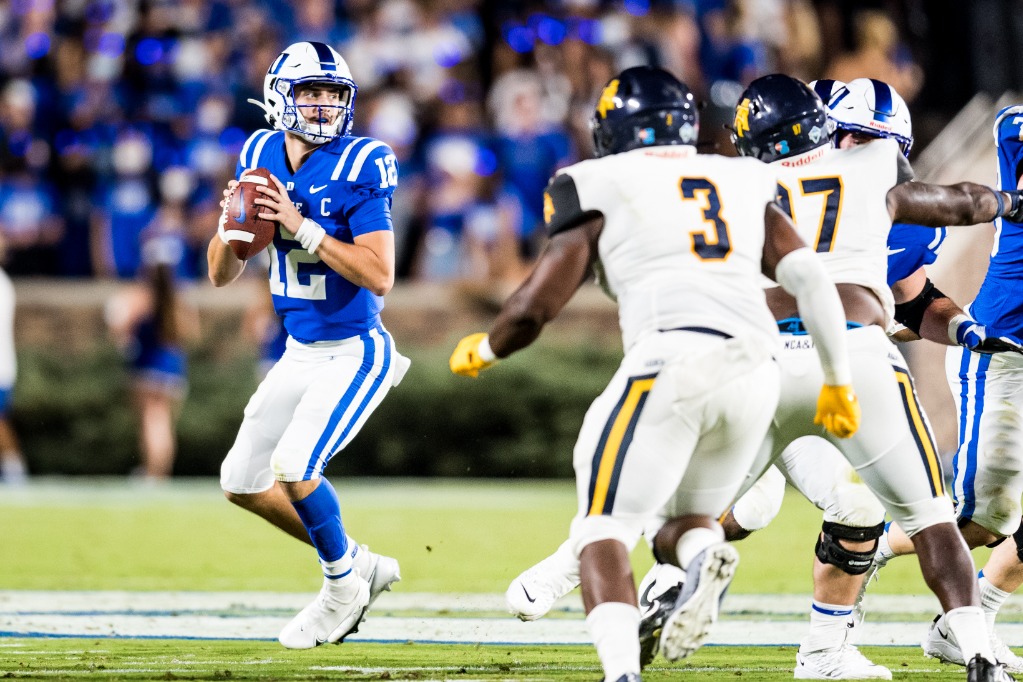 North Carolina A&T gave Duke all it could handle in the first half before the ACC squad pulled away at home in Durham.

NC A&T threw a scare into FBS ACC member Duke in the first half but couldn’t keep up with its quick strike offense as the Blue Devils pulled away in the second half to win at home in Durham, 45-17.

Duke senior running back Mataeo Durant scored on runs of 19, 1 and 2 yards in the first half and quarterback Gunnar Holmberg rushed for two third-quarter scores as the Blue Devils moved out from a 21-14 halftime lead to lead 42-17 after three quarters.

The loss drops A&T, playing its first year as a member of the Big South Conference, to 0-2 for the first time since 2010 when they lost their first seven games en route to a 1-10 finish.

The Aggies scored first after stopping Duke in the game’s initial possession. With back-up quarterback Kingsley Efedi at the controls in place of game-one starter Jalen Fowler, the Aggies grinded out 86 yards on a whopping 20 plays, taking over 12 minutes off the clock to score on Efedi’s 1-yard plunge with only 1:07 left in the quarter.

Duke answered in the next possession driving 75 yards in eight plays to cash in on Durant’s 19-yard run. On the ensuing kickoff, placekicker Charlie Ham perfectly executed an onsides kick with the Devils recovering at the A&T 47. Holmberg connected on passes of 13, 12 and 34 yards, the final one to junior wideout Jalon Calhoun that carried to the A&T 2. Durant took it in from there to put Duke up 14-7.

The teams exchanged possessions before A&T got the ball back with 7:51 left in the half. The Aggies and Efedi again put together a long drive, going 59 yards in 14 with Efedi taking it around right end for a 6-yard scoring run. Brown’s PAT tied the score at 14 with just :58 seconds left in the half.

Any notion that Duke would settle for the halftime tie were dashed as Holmberg came out firing. In true Tom Brady style, Holberg connected on four of seven passes covering 67 yards down to the 2-yard line. From there Durant took it in. After a review confirmed the score and the PAT, Duke led 21-14 with just :03 seconds left in the half.

Duke pinned A&T deep on its own 6 on the second-half kickoff and then forced a three-and out. The punt was returned to the A&T 29 and the Blue Devils needed just four plays to reach paydirt. Holmberg got his first TD on a 1-yard run to put Duke up 28-14.

A&T responded with another long drive, going 64 yards in eight plays and settling for a 26-yard Brown field goal. But that’s the last time the Aggies would score.

Duke would tack on two more long drives that ended with a 9-yard Holberg scoring run and another 9-yard scoring run by back-up QB Jordan Moore. The last TD came with 1:56 left in third quarter giving Duke a 42-17 lead, all but putting the game away.

Duke added a fouth-quarter field goal for the final margin. .

Efedi threw 18 times completing 10 for 53 yards. He was also the Aggies’ leading rusher with 15 carries for 83 yards. Preseason all-Big South running back Jah-Maine Martin was again held in check getting just 20 yards on 13 carries after having similar nunbers in an opening game loss to Furman.

Durant, who ran for a school record 255 yards in Duke’s opening game loss to Charlotte, was held to 41 yards in 15 carries. Holmberg did the most damage, passing for 270 while completing 20 of 27 throws. Calhoun had five receptions for 98 yards while Jake Bobo had nine grabs for 90 yards.

NC A&T is off this week before facing former MEAC rival North Carolina Central in ints home opener on Sept. 25.