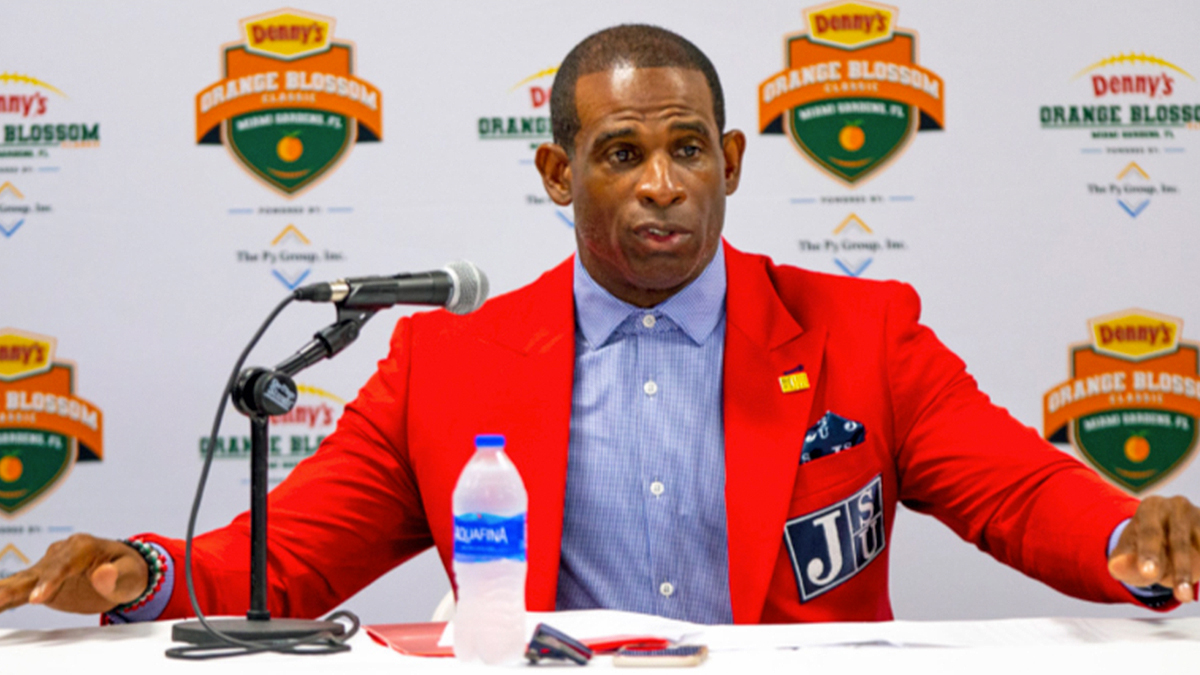 Jackson State coach Deion Sanders stirred the pot again proposing an HBCU mega-conference “like the SEC” on the same week that the man some say is responsible for today’s SEC, Sam Cunningham passed.

It’s quite ironic that on the same week Jackson State head coach Deion “Coach Prime” Sanders talked about the Mid Eastern Athletic Conference (MEAC) needing to ‘fold up like a tent’ to join the Southwestern Athletic Conference (SWAC) and form an HBCU super conference “so we can do this thing like the SEC (Southeastern Conference),” the man some say is responsible for today’s SEC, Sam Cunningham, passed.

Back in 1970, Sam Cunningham was a bruising 6-3, 230-pound sophomore running back in the all-black backfield of the Southern CaliforniaTrojans. Quarterback Jimmy Jones and fellow running back Clarence Davis lined up with him.

In the first game of his career on September 12 at Birmingham’s historic Legion Field, Cunningham and his legion of cohorts, many of the African-American persuasion, took on the mighty all-white Alabama team under the tutelage of legendary coach, Paul “Bear” Bryant. It was the first integrated college football game played in Alabama.

As the story goes, and the nation witnessed, Cunningham and his cohorts ran over, around and through the vaunted Alabama defense. Cunningham, the older brother of future NFL quarterback Randall Cunningham, finished with 135 rushing yards on just 12 carries (11.4 yards per carry) and two first-quarter touchdowns. The Trojans outgained Alabama 485 yards to 32 on the ground. Southern Cal amassed 559 total yards in swamping the Crimson Tide, 42-21.

That was the first September surprise.

Some intimate the game vs. Southern Cal was Bryant’s idea hatched with USC head coach John McKay. They said it was Bryant’s clever way of catching up to what was going on throughout the rest of the country. Others say it was meant as a clear signal to staunch segregationists of the South, like Alabama governor George Wallace, that it was time to change.

Still others have said in books and documentaries about that game, that Bryant realized for his teams to stay competitive he needed players who were bigger, stronger and faster. That translated to African-Americans.

Jerry Claiborne, then an assistant coach at Alabama, in a statement about the Southern Cal game, said, “Sam Cunningham did more to integrate Alabama in 60 minutes than Martin Luther King Jr. did in 20 years.”

SEC moves “with all deliberate speed”

Bryant’s team went 6-5-1 in 1970 and again finished unranked. The display put on by Cunningham and his Southern Cal teammates helped accelerate the speed of integration at Alabama, at other teams in the SEC and throughout the South.

After incorporating more African-Americans in his program thereafter, Bryant had his greatest stretch. Over the next decade or so (1971 to 1981), his teams went 116-14-1, a winning percentage of .885. Alabama lost three games in a season once, had six seasons with one loss, three seasons with two losses and were undefeated (12-0) in 1979.

Only Nick Saban and Jake Gaither come close to that mark.

Sam Cunningham, who went on to a productive New England Patriots Hall of Fame career in the NFL, died on Tuesday, September 7 at 71, almost 51 years to the day that he helped change football in the SEC, the South and all over America.

The SEC we see today is, in large part, a result of the statement that Cunningham and his cohorts made on Sept. 12, 1970.

So, perhaps its more paradoxical than ironic that Sanders would make such a statement in the midst of a coming new era in HBCU athletics. The athletes that Cunningham helped open the doors for now stream into places like Alabama and the SEC the way they once streamed into HBCUs. And with them has come a windfall of riches, national championships and all the accoutrements that come with it – multi-million dollar sponsorships and payouts, mega-million dollar television deals and generational wealth for the institutions and their coaches.

So, what in essence is “Neon Deion” saying when he says the MEAC should “fold up” and “do this thing like the SEC?”

is he proposing to bring back those players to HBCUs on whose backs, shoulders and thighs the SEC has been built?

Does he want re-build the HBCU institutions with the abililty to attract those players, re-assemble the programs and compete with the likes of the SEC, Big Ten, PAC-12, ACC and Big 12, the so-called Power 5 conferences, across the board in all sports?

Is he trying to flip-the-script and proactively begin to change the narrative and strike a death blow to years of HBCU neglect and disrespect and dispossession of its once most valuable human capital, its African-American players?

I have always said it would take a special coach and a special president, chancellor or athletics director to propose or even say what Sanders said.

Coach Prime is that bold and he’s that person.