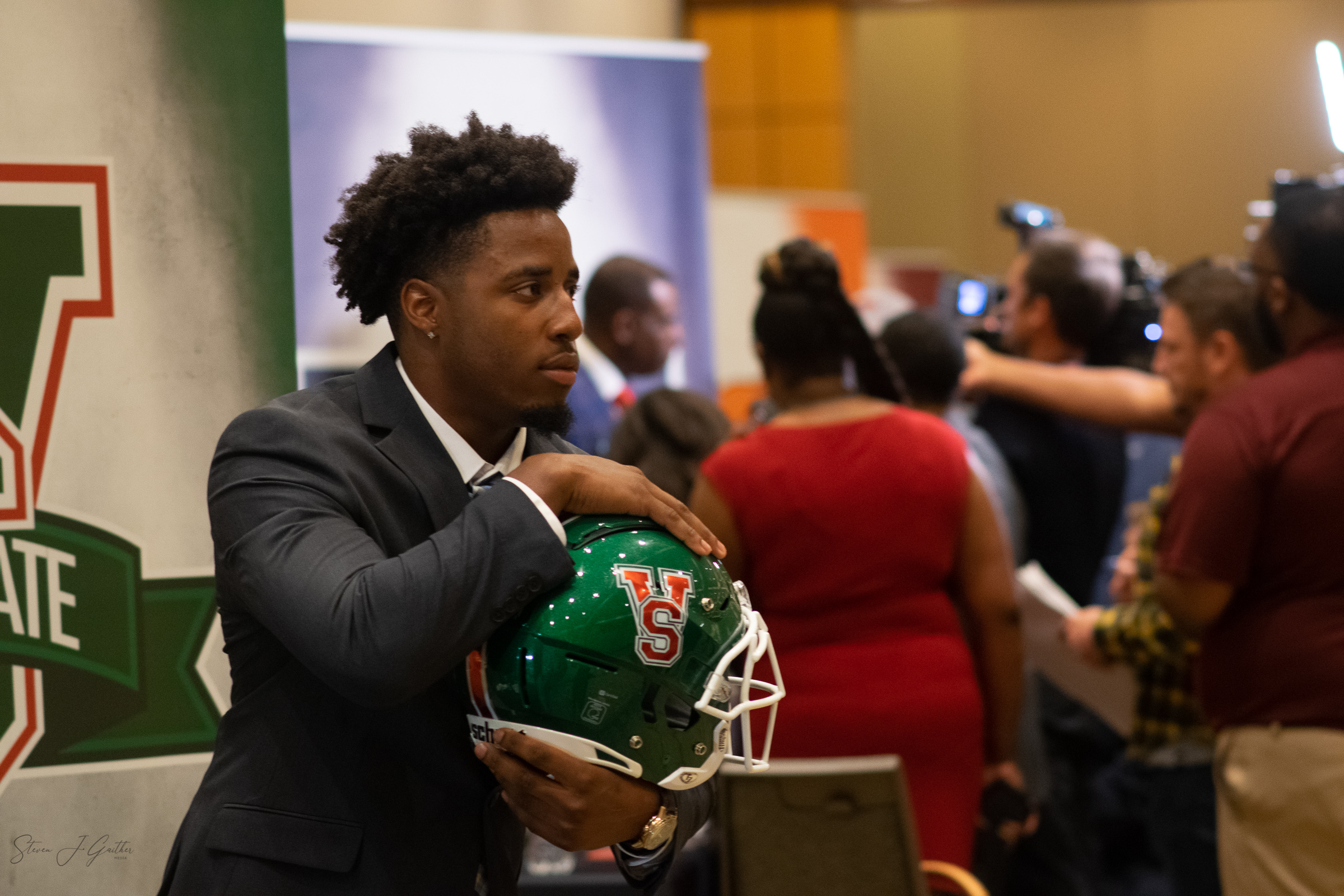 Mississippi Valley State doesn’t have many resources, even by SWAC standards. But it has some resources money can’t buy.

The record will show spring 2021 as another sub- .500 season for Mississippi Valley State. It only won one game, and that was a forfeit by Alcorn State.

But numbers only tell a part of the story of the spring.

First, there was a COVID-19 outbreak that kept it off the field for its scheduled opener against Jackson State. After a dreadful second quarter when it finally met Jackson State in its season opener, Valley made JSU earn everything in the second half. A similar situation came up in its second outing as it recovered from an early 14 point deficit to give the eventual SWAC West Champions all they could handle. Alabama State beat Valley 42-17, but that lead was 21-17 heading into the fourth quarter.

All those losses could demoralize a team, but Vincent Dancy is convinced that the total opposite is true of his program.

Flanked by running back Caleb Johnson and defensive tackle Jerry Garner, there is an aura of confidence surrounding the coach and his young men.

“What helps us is being able to have these guys in the locker room. That alone helps us out. And football is still right there on their minds.

The Memphis, Tennessee native has been with the program for four years. He knows that other teams in the SWAC have had Valley scheduled as an easy victory for years. But now, he says, folks are starting to understand that Dancey’s Devils aren’t going to lay down easily.

“We play with a chip on our shoulder. We want guys who are under dogs, that play with that grit — that grind,” he said. “It’s tough. We’re the underdog every week, but each team knows when they play us: strap ‘em up.”

Johnson finished the three game season averaging 4.7 yards per carry and scoring two touchdowns. Quarterback Jelani Eason led the team in rushing, carrying the ball 20 more times than Johnson. That’s usually not a good sign. Simply put, the offensive line play has to get better. It gave up 13 sacks in three games, making it tough for the offense to run efficiently and feed the ball to Johnson. He knows it, and he’s looking forward to getting more touches in the fall.

“I’m just trying to keep that ball rolling going into the fall and keep my team in the best position in order to win,” he said.

A big piece of Valley’s plan to get out of the SWAC cellar sat on the other side of his coach. Jerry Garner is a 6’2 defensive end with a legit ability to play at the next level. He recorded nine tackles and two sacks in three games this spring.

Dancy knows he’s more fortunate than several SWAC coaches in one regard. Many of the best players in the league took advantage of the one-time transfer shot and moved on to the FBS. Garner stuck around.

Mississippi Valley is at a disadvantage resource-wise, even in the SWAC. It It spent just $1.2 million on its football program, according to CollegeFactual.com. That’s less than half of both its SWAC neighbors in Alcorn State and Jackson State. It doesn’t have the recent success of ASU or the brand and coaching star power of Jackson State (Dancy’s alma mater). But it has a few resources that money can’t buy. Loyalty and faith. Loyalty to each other and faith that better days are ahead in the Valley.