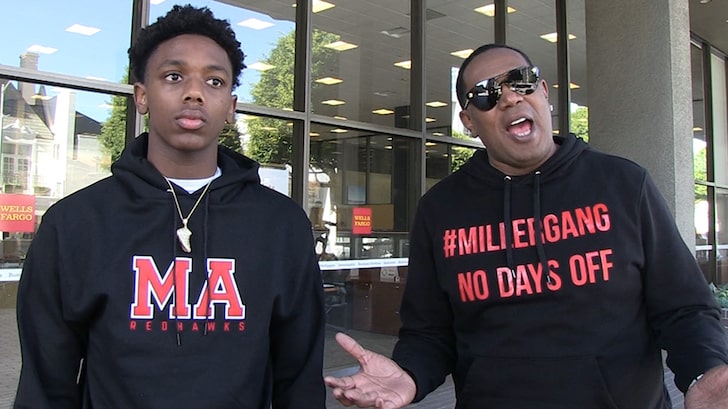 His son, Hercy Miller, already has a big endorsement deal. But Master P has some advice for parents and athletes looking to capitalize on NIL.

He will always be the son of Master P, but last week, Hercy Miller made waves in his own right.

The future Tennessee State guard inked a $2 million deal with Web Apps America just hours after the NCAA made it legal for student-athletes profit off their name, image and likeness.

“It’s a blessing and I’m happy to get a deal like this and I think it was needed,” Hercy told the Tennessean. “It was time to change players making a name for a school and not being rewarded. Players should be rewarded for their hard work.”

Miller said that while he plans on getting a car with his money — he’s got his eyes on a Tesla — he’s going to mostly be putting it up. But he will give to the community.

“My first thing was to give back and help the youth and the elderly in the community,” Hercy said. “I’m not one of those kids that likes to splurge my money. I’m definitely saving money and I’m going to make investments into the future.”

Hercy Miller is a three-star athlete, who had his share of Power Five schools interested in him. He has a lot of potential at the collegiate level. However, not every three-star has a Hall of Fame Hustler as a father to help facilitate such a deal.

Master P., a natural-born hustler and self-made millionaire if ever there was one, has some advice for other parents looking to help their children navigate this new world.

“What I want to tell families who have kids in college is stop going after these big companies like Nike, Apple, All-State — they already have bigtime pro athletes as spokespeople so they’re not looking at college athletes,” Master P said.

“We went after these technology companies because technology companies and other companies that are about to go public are ready to spend the money and invest into the future and want to grow whatever kids they connect their brand to. They’re looking at social media impressions and see this as a way to add value to their company.”

And just because his son is sitting pretty doesn’t mean Papa P is done deal-making. He said he plans on helping other Tennessee State athletes get to the money as well.

“We’ve always been successful, and that’s what I told (TSU coach Brian Collins); we’re not changing and this is only the beginning,” Master P said. “We’re not going to stop until other kids are able to get deals like this made. Where companies see their talent and say, ‘Let me invest in these kids because I know they’re going to be bigtime stars in the future.'”