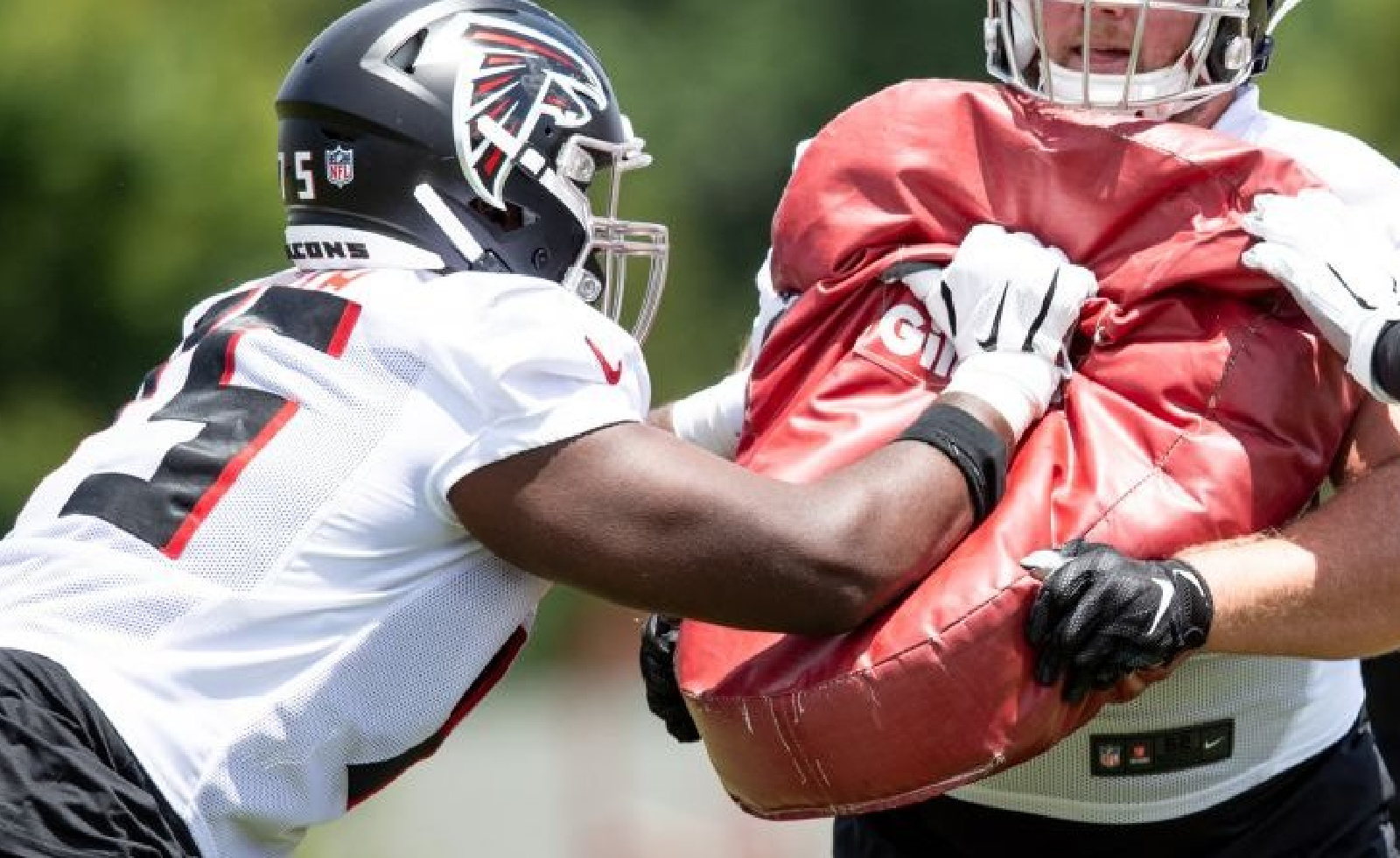 CIAA to NFL: Kion Smith’s outlook with the Atlanta Falcons

Kion Smith signed with the Atlanta Falcons after going undrafted in the 2021 NFL Draft. The former Fayetteville State University lineman could come in and make an instant impact with the Dirty Birds who struggled in run blocking. With OTAs in full swing, Smith is confident in his performance so far.

“My biggest takeaways has been to know your stuff, do it at 110%, and don’t take any days out there for granted.” Smith expressed to HBCU Gameday.

Smith was a three-year starter at FSU that received CIAA first-team All-Conference honors. FSU won the division in each of those years and reached the CIAA Championship in 2019. Smith has been praised for his ability to seal defenders and his dog-like mentality. In 2019, the Broncos only allowed 14 sacks in 11 games with Smith holding down the QB’s blind spot. This number was top among offensive lines in the CIAA. Smith’s footwork needs some refining before he will be able to go toe-to-toe with the NFL’s elite edge rushers. Until then, he is expected to shift to the guard position after being a swing tackle at FSU. During the Hula Bowl and Tropical Bowl, Smith showed the ability to dominate as an interior lineman. His versatility and high ceiling will surely be valuable on the NFL level.

Out of the UDFA offensive lineman signings, Smith received the highest reported amount of guaranteed money.

Matthews, Lindstrom, Hennessey, and McGary are the only sure locks for the final roster. Matthews will fill the starting left tackle role that he has been excelling in since 2014. Lindstrom will secure a spot at guard as the rising star is coming into his third season with the Falcons. Hennessey is entering his second season and will surely have a continued role at center. McGary is a returning veteran tackle who hasn’t solidified a starting role but has proven enough to have a chance.

Outside of those four returners, the path to the 53-man looks very promising for Kion Smith. The Falcon’s interior line has a lot of questions heading into training camp. With Smith projected to be a guard, there is plenty of opportunities for him to see the field in Atlanta.

Matt Gono has spent the past three seasons with the Falcons and appeared in 21 games with four starts. Gono has lined up at left tackle and right guard, but inconsistencies have him projected to be a depth piece. Jalen Mayfield was drafted from the Michigan Wolverines and will compete for snaps at guard as well. Drew Dalman was drafted from the Stanford Cardinals and will primarily compete at the center but may play snaps at guard as well. After these guys, the competition level takes a big dip.

Josh Andrews is a 30-year-old journeyman who will probably only be retained as a depth piece. Willie Wright has been praised for his zone blocking and versatility in his two seasons but he hasn’t been able to perform on a consistent basis. Willie Beavers has bounced around practice squads and even the XFL since being drafted in 2016. He will have a lot to prove to make a roster.

Bryce Hargrove was signed out of the University of Pittsburgh and will compete for snaps at guard given his ability to shine as a run blocker and pass protector. Jack Batho comes in from South Dakota and is projected to line up on the outside during training camp. Sam Jones was drafted in 2018 by the Broncos but hasn’t played a minute in the NFL yet. Joe Sculthorpe was signed out of Ledford and will fight for a shot to play center and guard.

The Atlanta Falcons typically have retained nine or 10 offensive linemen as a team can never too much depth in the trenches. Kion Smith’s outlook to make the 53-man roster is very optimistic. Smith’s blocking ability, football IQ, and versatility cannot be overlooked. The Falcons allowed 174 pressures (28th in NFL) and 167 pressures (24th in NFL) in 2019 and 2020. Pressures include QB hits, sacks, and hurries and are accredited to poor offensive line play. With the new coaching staff headlined by a run-happy Arthur Smith, Kion Smith could be a sleeper for this year’s success. NFL teams must cut their roster to 85 players by Aug. 17, 80 players by Aug. 24, and 53 players by Aug. 31.

CIAA to NFL: Kion Smith’s outlook with the Atlanta Falcons